A team of gearheads at the University of Wisconsin-Madison have developed an engine that can handle a blend of gasoline... 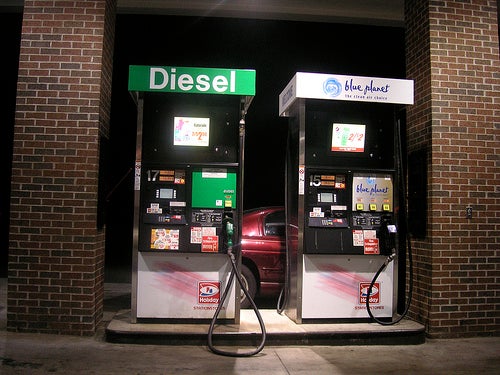 A team of gearheads at the University of Wisconsin-Madison have developed an engine that can handle a blend of gasoline and diesel fuel. It outputs low emissions, and offers up to 20 percent greater fuel efficiency.

The fuel injection system, called “Fast Response Fuel Blending,” mixes the fuels in the combustion chamber to precise proportions. Because the control is so precise, the engine runs at a lower temperature, which means less heat-related energy loss. Also, because the fuel mix is carefully optimized, there’s less wasted fuel in the combustion process.

The proportions adjust on the fly according to real-time situations a vehicle faces. Depending on how much weight a truck is carrying and work an engine is putting in, you might see the gasoline-to-diesel ratio vary from 85:15 to 50:50–it really just depends.

Traditionally, the two fuels won’t combust when mixed in a diesel engine — “any attempt to use such a mixture as a motor fuel would be disastrous,” says one source — but the research team says that by controlling the amount and timing of the diesel spray, they can successfully cause combustion.

Team leader Rolf Reitz presented his study at a Department of Energy conference yesterday, and says that they’re regularly meeting the EPA 2010 fuel efficiency standards with this blend. He also thinks it could reduce auto-related oil consumption by 33 percent.