Amphibious cars aren’t for everyone, but if you happen to be in the market for a car that runs on... 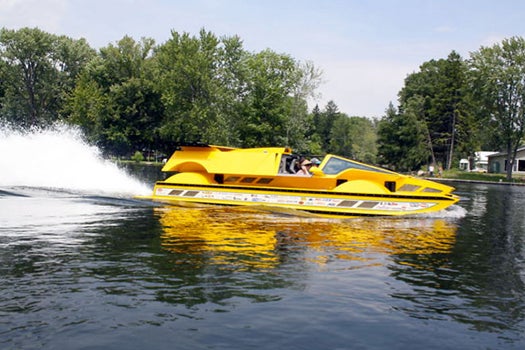 Amphibious cars aren’t for everyone, but if you happen to be in the market for a car that runs on both land and water AND you prefer your mode of transit in canary yellow AND you have $777,000 in a PayPal account, Rick Dobbertin’s HydroCar is available on eBay for the next ten days or so. And hey, it’s only $1,000 dollars down.

Dobbertin, we’ve learned from WIRED, made his reputation building award-winning hot rods back in the ’80s and via his original acquatic creation, the Dobbertin Surface Explorer – a 32-foot milk tanker turned amphibious vehicle. Dobbertin took his Surface Explorer around the globe apparently, proving the explorers chops on the high seas.

His latest design appears to meld his passion for fast cars and water-going vessels, as Hydrocar’s top speed is supposed to be 60 miles per hour in the water (its 762 horsepower Chevy big block surely does better on land). But, Dobbertin notes in the listing, HydroCar isn’t exactly a completed project and thus is meant as more a collector’s item than a vehicle for everyday use (it’s fully functional, he says, but hasn’t been through all the proper testing).

A lack of funds and the ongoing financial crisis are forcing Dobbertin to sell HydroCar as is. But if one man’s expensive, over-the-top and utterly awesome amphibious car project happens to be your treasure (and you have the treasure with which to pay for it), check the eBay listing here.

There are a bunch of videos of HydroCar in action available via the eBay listing, but to save you the trouble we’ve provided one that shows the vehicle performing both on land and on water below.