Could cars talk to each other directly to make the streets safer? 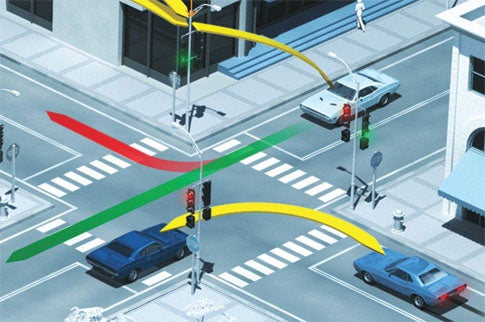 Car accidents kill 115 people a day in the U.S. and cost an annual $230 billion. Cautious drivers can avoid only so much danger, especially when it’s a car running a red light, or a truck that pops out of a blind spot. But commuting could get safer with new in-car technology that warns you of that vehicle just around the corner — and even hits the brakes for you.

Most car communication networks in development use the same Wi-Fi chips found in your laptop. But those units were made to pick up a signal from the router on your bookshelf, not dozens of signals zipping by at 50 mph and creating “digital echoes” as they reflect off buildings. So the Australian company Cohda Wireless designed a Wi-Fi chip with a receiver that better tracks a moving signal and algorithms that filter out interference. The radio broadcasts a car’s location and speed to every similarly equipped vehicle within at least 500 feet. Thinking about passing an 18-wheeler? The chip detects an oncoming car’s signal and sounds a warning.

In 700 two-car trials, the company’s radio warned drivers of oncoming danger 21 seconds in advance — 18 seconds faster than similar systems. If a large-scale test later this year in Australia goes well, the tech could reach consumers by 2012. In the future, says Paul Alexander, Cohda’s chief technical officer, it could integrate with automatic steering and braking to respond to immediate hazards.

Auto-safety experts estimate that the system could reduce car-accident deaths by up to 50 percent. “It’s a bold claim,” Alexander says, “but people’s inattention is a big factor in road accidents. Technology is always on — it’s always thinking and always aware.” 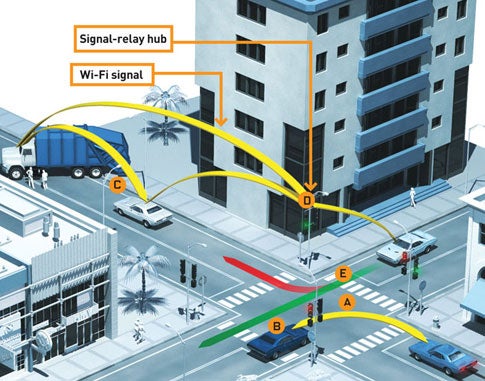 Collision Avoidance: Vehicles transmit their speed and position to cars within at least 500 feet, 10 times per second [A]. Onboard computers analyze the data and warn the driver of, for example, imminent collision with a car running a red light [B].