Yesterday, the MTA (the transit organization that covers New York City and its immediately surrounding area) unveiled the very first... 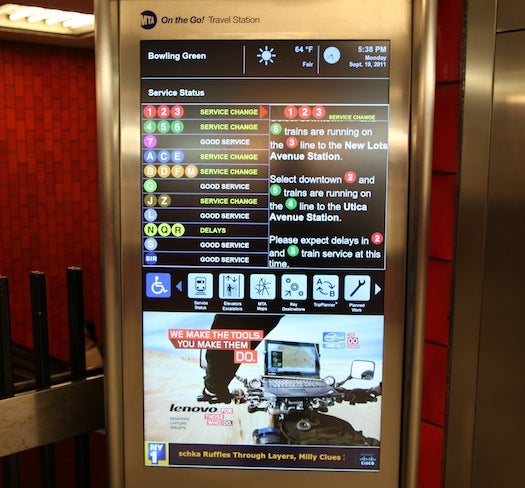 Yesterday, the MTA (the transit organization that covers New York City and its immediately surrounding area) unveiled the very first On the Go Travel Station, a 47-inch touchscreen installed in certain subway stations that provides to-the-minute updates on inevitable delays, as well as a subway map and a trip planner. I went down to the Bowling Green station to try out this first installation.

Made by Cisco, the Travel Station is essentially a 47-inch TV turned on its side and given a touchscreen makeover. The top two-thirds or so are taken up with all the various navigation options–subway notifications, trip planner, subway map, that kind of thing–while the bottom plays continuous ads. Cisco is paying for the first round of these stations (they’ll be installed in a few stations in Manhattan, as well as the Atlantic-Pacific stop in Brooklyn and Jackson Heights in Queens) but they expect the ads to generate enough revenue to build more.

I went down to Bowling Green, a station right near the southern tip of Manhattan, on a day when people actually did need to know what was happening with the subway lines in the city. A flood in the Upper East Side had crippled several lines, including the 4/5, which stops at Bowling Green. As usual with the MTA, communication was confused, a combination of MTA security folks directing people to more reliable trains and garbled announcements that may or may not have been in English to begin with. In other words: the perfect time for a clear, high-tech information system.

The On the Go Travel Station is located upstairs, next to the Metrocard terminals. Standing next to it were three uniformed NYPD officers–not MTA security, but the real deal. Oddly, though, the Travel Station was completely unused when I went up to test it. There’s no clear sign that this display is actually an interactive touchscreen, so sometimes people would read the scrolling alerts, but nobody seemed to realize they could touch it. Even worse, I heard two Canadian tourists ask the police officers for help–they were helpful (though oddly amazed that Canadian postal codes have letters in them) but didn’t even suggest trying out the Travel Station.

Once I started playing with it, though, a small crowd (read: three people) gathered around to watch. “That’s some crazy shit,” said one middle-aged man. After I left, more people started to tentatively approach it and even touch it. But how did it work?

I was actually pretty impressed with the Travel Station. It’s very cleanly and clearly organized, with big buttons for Service Status, Elevators, MTA Maps, Key Destinations (the Canadians could have used this to go to Times Square), a Trip Planner, and Planned Work listed all along the bottom of the usable portion of the screen. The screen itself is pretty sharp, though the touchscreen is not incredibly sensitive. It’s not a capacitive screen, like the iPad or a smartphone–that type of screen, which relies on the electricity given off by a human finger, is extremely expensive at that size.

I believe Cisco went with a camera setup, in which cameras in the sides of the device bounce infrared light off anything that comes in contact with the screen (this is how Microsoft’s Surface works). You can see in the video that I sometimes had to tap two or three times to get it to work, and that panning (as with the subway map) is a bit laggy. But overall it works pretty well, and as there’s no cellphone service down in the MTA tunnels, it’s a pretty good way to figure out what’s going on in the subway system and how to get around.

MTA says the next few Travel Stations will be rolling out “in the coming weeks.”