Researchers on two continents are reporting two big breakthroughs in quantum computing today — a quantum system built on the... 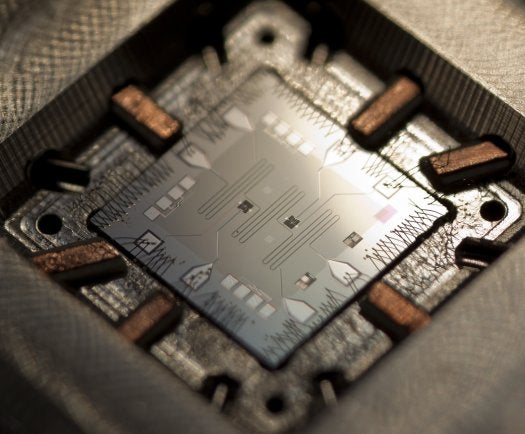 Researchers on two continents are reporting two big breakthroughs in quantum computing today — a quantum system built on the familiar von Neumann processor-memory architecture, and a working digital quantum simulator built on a quantum-computer platform. Although these developments are still constrained to the lab, they’re yet another sign that a quantum leap in computing may be just around the corner.

In the first study, researchers at the University of California-Santa Barbara say they’ve built the first working quantum computer chip based on the von Neumann system. Named for the engineer who designed the concept, the von Neumann architecture combines processors and memory, and it’s the basis for every computer out there. (With one notable recent exception.)

This quantum CPU (quCPU?) is a big breakthrough, because quantum computers by definition are difficult to design. They’re based on the concept of superposition — that a quantum bit, or qubit, can exist in two different states at once. Put another way, it can be a 0 or a 1 at the same time, and it can therefore perform calculations more quickly than a system based on 0 or 1. But it’s hard to keep the qubits in a state in which this is possible, and interfering with them — i.e., reading their data — can destroy their superposition capabilities. So, a system that integrates random access memory into the qubits is a big step toward a working computer.

Researchers at UCSB super-chilled their quCPU to near absolute zero and performed a few calculations. Quantum information traveled back and forth among storage and processing elements, and the system performed pretty well — not perfectly, but it’s a start. They also found that the quantum memory can retain information for much longer periods than the qubits, which is also a good sign.

Next, the team is trying to increase the number of quantum devices integrated on a single chip, and they’re studying different metallic materials to make this easier, according to Physics World.

In another quantum paper, researchers in Austria report building the first working quantum simulator — kind of like a quantum computer, but different in scope. It can be used to model the behavior of quantum systems, which can potentially help improve quantum computers.

It would be useful for many reasons to model the behavior of quantum systems, but this is impossible with a traditional computer, as Richard Feynman figured out in 1982. It would take exponential time, with the system working more and more slowly as the calculations increased in number. For a general description of a quantum spin system with 300 particles, a computer would need more memory than exists in the world — even if all of the observable matter in the universe was processed into memory, as the Austrian researchers put it last year. But a quantum simulator, which can complete so many more calculations, would not experience this slowdown. To make one of these, you would have to very carefully control the setup of the simulator, and this is what the Austrians have done.

The team used six laser-cooled calcium atoms as qubits, and used laser pulses to initiate calculations. They found the system could simulate several types of interacting spin systems, according to Science magazine, which published both papers today. The simulator can be reprogrammed to simulate any type of quantum system, the researchers say.

Given breakthroughs like these, quantum computers may be closer than ever.