Why Having A Liquid Nitrogen Pool Party Is A Bad Idea

Note to Fox News: it wasn't a cloud of toxic chlorine. 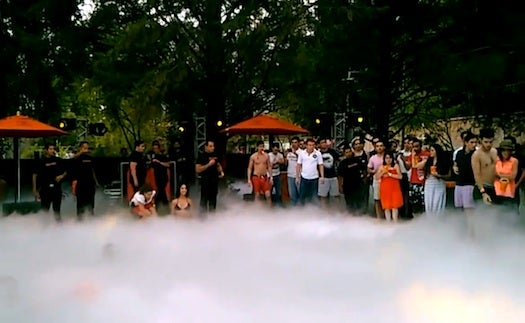 So you probably know it’s not a good idea to swim in a pool with liquid nitrogen. You might not know exactly why—we’ll discuss this further ahead—but it just sounds like a bad idea, right?

Right. German liquor company Jägermeister recently hosted a party in Mexico, during which staffers poured what appeared to be numerous 10-liter dewars of liquid nitrogen into the water, creating a foggy effect. In videos, you can hear partiers “Woo!”-ing… and then, not two minutes later, those not in the water pointing and saying, in Spanish, “Somebody’s fainted. Someone else has fainted.” Another video shows partiers jumping into the pool to pull limp bodies out of the water.

What happened? Not what others have reported, according to ChemBark, a blog by St. Louis University chemist Paul Bracher. Fox News Latino, the U.K.’s the Daily Mail, KTLA and others have said the nitrogen reacted with chlorine in the pool to form a “toxic cloud.”

“This is almost certainly incorrect,” Bracher wrote. Actually, molecular nitrogen is inert and shouldn’t react with anything in the pool, he said. Instead, the nitrogen displaced oxygen from the air above the pool, “leaving none for the swimmers to breathe.” Yipes!

When I first watched the videos, I braced myself for seeing people screaming as their skin froze, Ice-9-style. While skin damage could be a danger to adding liquid nitrogen to a pool, Bracher doesn’t think that happened because, well, the swimmers didn’t scream or jump out of the pool or anything. Instead, he told me in an email, it seems staffers added the liquid nitrogen slowly enough that it boiled away before it touched anyone’s skin. Liquid nitrogen has an extraordinarily low boiling point of -196 degrees Celsius, or -321 degrees Fahrenheit, and quickly boils at room temperature. It was that boiling action that displaced oxygen for the swimmers.

Liquid nitrogen has some great potential, but as its use becomes more popular, incidents like this provide a necessary reminder that it is not a toy and should be handled with proper caution.

Check out ChemBark for an explanation for why the asphyxiating swimmers probably couldn’t feel what was happening to them and call for help.