Everlane’s website is one of the best resources for finding out what goes into your clothes. The minimalist, web-only clothing... 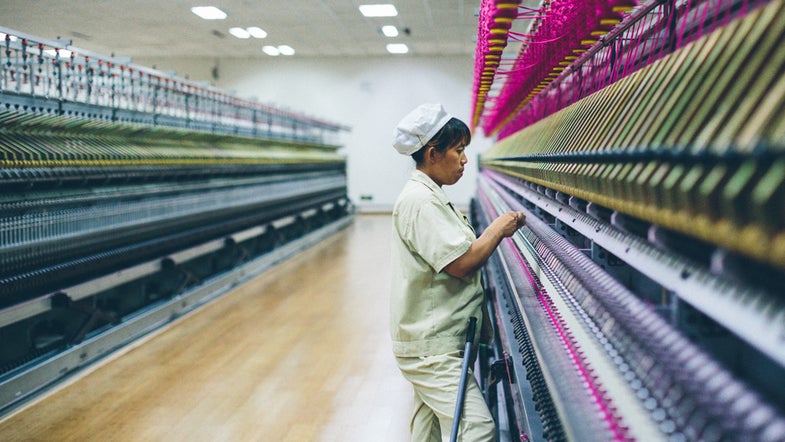 Everlane’s website is one of the best resources for finding out what goes into your clothes. The minimalist, web-only clothing company practices “radical transparency,” and their blog is doused with behind-the-scenes videos from their factories and manufacturing cost break-downs. The company was just named one of New York magazine’s boom brands of 2013 despite only putting out a few new designs each year, so this summer I called up founder Michael Preysman to get a little deeper into the science of being extremely picky.

Why radical transparency?
So you’re at a store and you pick up this thing and—I don’t know if you’ve ever experienced this–you buy something and it falls apart two washes in, and then you buy something else there and it lasts a long time. It’s really hard to tell quality and trust the product you buy at a lot of these places. There’s a generation today that really wants to know where its products come from.

You don’t have a background in fashion. How did you go about finding the materials and factories that do things the way you want them to be done?
You’d be surprised how much you can find on the internet these days [laughs]. Before we work with any factory we go visit, whether it’s in Italy or in China. We meet with the owners to get a sense of how they treat their workers and how they go about building products. You can very quickly tell who the people who care are and who is trying to make a quick profit.

Aren’t we all supposed to be producing stuff domestically? “Made in America,” etc. etc.
We just think about who are the best places to make a certain product. For t-shirts it turns out that the U.S. does that really well. If we did denim we’d look at the U.S. because the U.S. does denim really well. But when we look at our button-down, it’s not great here. There are only two or three factories that do it and they’re really expensive and they’re for higher-end shirts, so we go to China for that. We produce our silk in that same factory. For [the new] leather products, that’s all done in Italy, Spain and the U.S.

Are you on the eco-friendly fashion bandwagon?
Well, one way to approach that is just producing less, and we’re definitely very eco-friendly in that way. If you producer fewer styles and things that last longer you’ll have a lot less waste, both from your own side—where you don’t have 10,000 of a product that didn’t sell—and you’re also going to reduce consumers’ waste. That’s one way we think about sustainability and we think it’s the more practical way. We haven’t yet gotten into eco-sustainability because it requires a lot of development and we’re just too small for it, but we’re looking into it on the t-shirts.

OK, back to gaining customer trust: It’s so easy today to make something really cheap look deceivingly high quality these days.
Fabric is one of the most important things when you think about how something is made. The design, yes, and the construction of it, but the fabric is really important so we spend quite a bit of time researching fabrics. For our poplin collection this year we tested out probably, I don’t know, 20-30 different poplin fabrics before we landed on this one.

How do you pick one out of 30?
Take a rayon fabric that we’re looking at for our Ryan collection. The first thing you generally look at is shrinkage, so what is the length and width shrinkage you see. Cotton fabrics are normally much more stable than a cellulose fabric like rayon or viscose. Rayon and Viscose are made out of wood pulp, generally, and those have higher shrinkage than cotton, but they also have this silkier, drapier feel that women love. For us it’s about, then, finding a rayon that doesn’t shrink as much. There are ways you can go about fixing that. One is in the finishing process and how tightly knit the fabric is. They’re all knit on circular machines and if you knit it on a larger circular machine you can get a tighter fabric weave at the end of the day.

Other things you look at are pilling. It’s such a silly test, but they put the fabric in a machine with a bunch of ball bearings and they rate it on a scale of 0-5 where 5 is the best [the least pilling]. Between 4 and 5 is generally where you want to be.

The other thing we look at is bursting strength, which is how likely you are to rip the fabric. I don’t remember what the whole scale is for that, but you want to be above a 45. [Ed note: Bursting strength is generally measured in kg/cm2, kp/cm2 (that’s kiloponds per square centimeter), or N/cm2 (newtons per square centimeter), but I’m not sure which Preysman is talkin’ here.] We’re learning more and more as we go since we’re pretty new to this, but there’s also colorfastness, for which we look at how much color changes after washing and how much it changes from exposure to sun.

We test every fabric we’re going to use on all those levels, sometimes with third party testers, but we also do home testing. With certain things like shrinkage, testing with third parties can be unreliable because they might not replicate the washing process that real people use at home.

What’s been the hardest one of your own standards to meet?
Well, it turns out a lot of people just aren’t that knowledgeable about fabrics, so while they’re selling them you can ask a lot of questions, but they’re often not that helpful. You really have to do all the testing yourself. We ran into the issue once where a manufacturer ended up substituting our silk for nylon and we caught them in the process. We sent the fabric to testing and it became obvious, but not all companies test as thoroughly as we do.

For more beautiful photos of Everlane’s cashmere- and silk-production process, check out china.everlane.com. Or watch them make a t-shirt here.