Best Wishes from the Liaoning 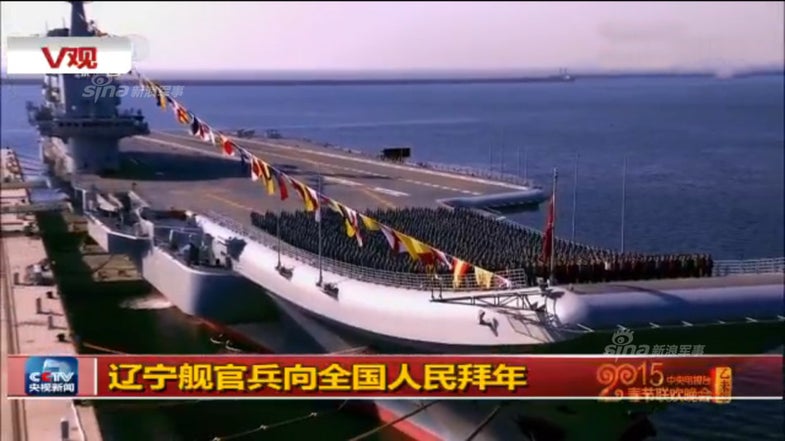 About 1,400 members of the Liaoning's crew gather on its ski ramp for the cameras. Of course, that's not the entire crew, some one has to stay below deck to make sure the rest of the ship runs. But 1,400 people is enough to cover up the entire ski jump ramp. CCTV, via sina.net
SHARE

China’s new aircraft carrier, the Liaoning, has a 14,700 square meters flight deck that allows a wide array of uses. But it’s a safe bet that a setting for a music video was not on the radar screen of either its original Ukrainian builders of recent US Office of Naval Intelligence threat analyses. 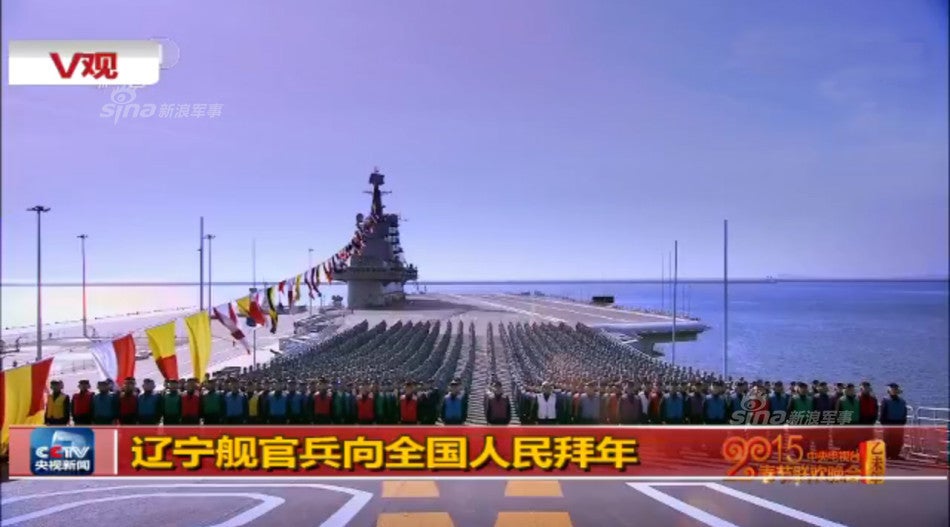 Greetings from the Liaoning

Over a thousand sailors and air people give a warm greeting to the Year of the Goat (and the CCTV helicopter of course). This is all part of President Xi’s music video “I Give My Heart to You”.

For the 2015 Chinese New Years this February (which is the 4713, 4712 or 4652 Chinese New Years, depending on who you ask), over a thousand Chinese sailors and air persons lined up on the Liaoning’s ski ramp to say hi to the cameras. This wasn’t just any ordinary photo op, but for the photoshoot of the Chinese Central Television (CCTV)’s Chinese New Year Gala, broadcast on February 18, 2015. 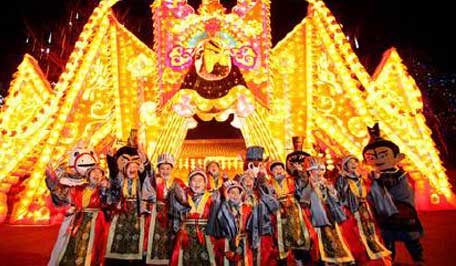 The Chinese New Years Gala is a seven hour long extravaganza (perfect for long family reunion dinners) with a variety of songs, stand up routines and comedy sketches (always reflecting the CCP’s current messaging). Despite its length, it gets a lot viewers for the live broadcast (2014’s 700 million strong audience was considered low).

The CCTV New Years Gala is perhaps the most widely viewed national TV broadcast in the world, with 700 million Chinese tuning in for 2014, which was considered a low year. The 2015 Gala heavily featured political themes promoted by the Chinese Communist Party, such as ethnic harmony (an ethnic Uighur host) and anti-corruption (two comedy skits). President Xi Jinping was the star of a music video, in which he met with various PLA units around China, including the Liaoning. 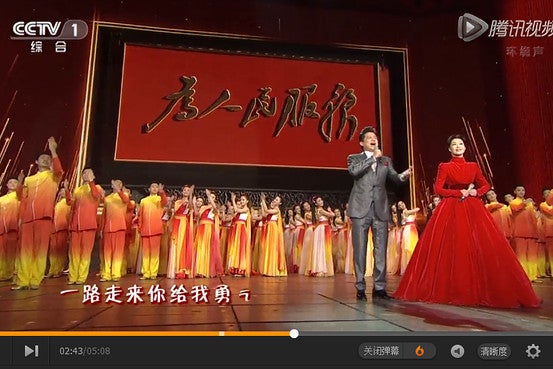 Musical numbers like these are an integral part of every CCTV New Years Special (think of a hours long mix of the Grammys, Oscars and Saturday Night Live).

And it wasn’t just any music video filmed on the carrier. “I Give My Heart to You”, is a political love song with lyrics like “My motherland, my brothers and sisters/ I give my heart to you”, the crowning cap to a gala that emphasizes key themes of the Xi Administration, such as social stability, patriotism and anti-corruption. In ten years time, perhaps a reissue of “I Give My Heart to You” could feature a fully operational Chinese carrier group as part of the festivities.

A Link to the Full Seven Hour Gala Video