Hackers Can Trick Driverless Cars With A Handheld Laser

Potentially forcing the car to slow down, stop, or swerve 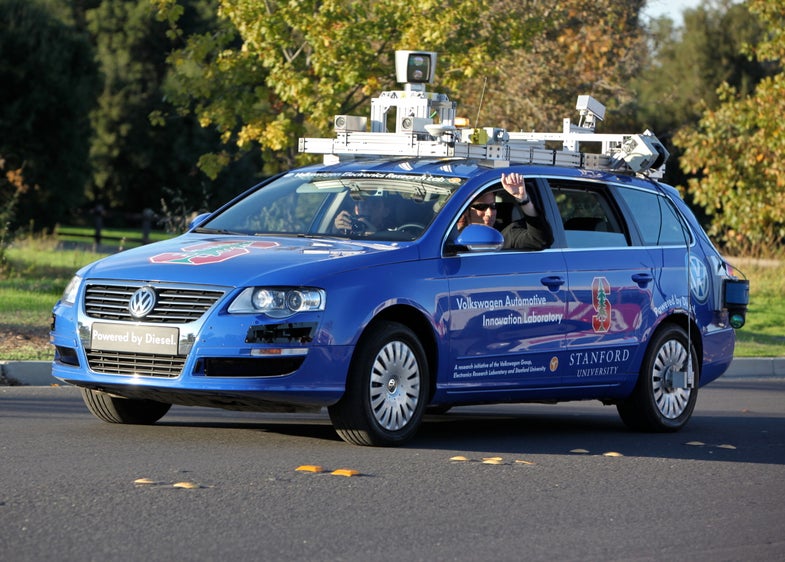 Volkswagen's self-driving car employs LiDAR and cameras, that feed into computers in the rear of the vehicle, to navigate and avoid obstacles on roadways. Steve Jurvetson/ Flickr (CC BY 2.0)
SHARE

It’s been a bumpy road for automobile security in the last few months. Chrysler is still reeling from security gaps that hackers exploited to kill a Jeep while it drove down a highway, recalling more than 8,000 SUVs this week and patching millions more. Security experts have been taking cues from that wake-up call, and DIY car hacking devices have even emerged on the internet.

Now, a security researcher says that the complex LiDAR (Light Detection and Ranging) system used in many driverless car prototypes can be fooled with just $60 in parts. (LiDAR relies on the same principles of radar, but instead uses lasers, making it quicker and more accurate.)

The hack allows for the attacker to trick the car into thinking there are objects where there actually isn’t—potentially forcing the car to slow down, stop, or swerve.

“I can take echoes of a fake car and put them at any location I want,” Jonathan Petit of Security Innovation told IEEE Spectrum. “And I can do the same with a pedestrian or a wall.”

The setup consists of a small, low-power laser and a pulse generator, which Petit says could even be replaced by a Raspberry Pi, a small computer board used in DIY projects. He recorded laser pulses reflected by a commercial LiDAR system, and then simply mimicked them with the laser back at the navigation system.

LiDAR is a popular choice for autonomous vehicles, including reportedly the laser-point data collector in Google’s self-driving car. (It’s the car’s spinning hat that collects 1.3 million points per second.) Google’s car has redundancies, such as sonar, but a hack like this shows how easy it is to trick even high-tech sensors.

Petit’s method worked up to about 300 feet away from the car, and doesn’t require great accuracy with the laser beam. He can imitate the movement of cars, pedestrians or stationary obstacles from 50 to 1000 feet away.

He acknowledges that you can also use the same tools to blind a human driver, just by shining a strong laser pointer in their eyes. The hack seems more alarming, however. A future where we rely on autonomous cars rests on a 100 percent success rate, even when we don’t achieve it ourselves. To err is to be human, and that’s exactly the point.