They must have taken the red pill. 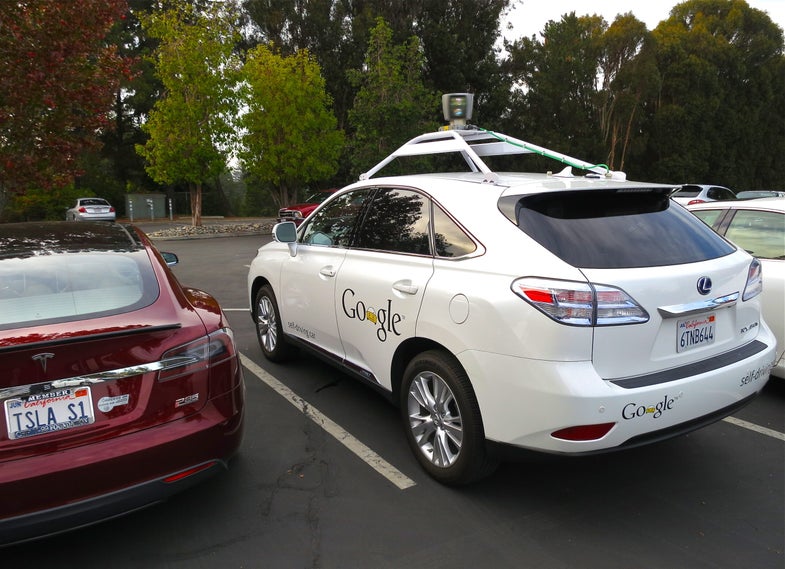 The idea of sharing the road with one of Google’s autonomous cars can be a bit unnerving. What if one of them malfunctions mid-drive and turns right into the middle of a busy intersection? Plus, who do you get to yell at if one cuts you off?

Well, in order to minimize these problems on the streets, Google has created what it’s calling a “Matrix-style” simulation of the entirety of California, to test the self-driving vehicles before they mingle with the normal human-operated ones. According to the Guardian, this virtual world is housed inside computers at Google’s headquarters in Mountain View, and provides a complete map of California’s entire road network. It even throws in some real life obstacles to trip the cars up, like overzealous motorists and jaywalking pedestrians. And Google has asked state officials to permit the virtual California to serve as an official proving ground for the cars, in place of physical driving tests.

“In a few hours, we can test thousands upon thousands of scenarios.”

In a letter obtained by the Guardian, Google’s safety director, Ron Medford, says Google wants to make sure testing regulations are “interpreted to allow manufacturers to satisfy this requirement through computer-generated simulations.” He goes on to say that simulations are actually more valuable, “as they allow manufacturers to test their software under far more conditions and stresses than could possibly be achieved on a test track.”

So far, Google claims the cars have “driven” more than 4 million miles inside the simulator. In the real world, the autonomous cars have driven approximately 700,000 miles over 2,000 miles of test roads. Researchers have then taken data from these tests and incorporated them into the simulator, creating various situations that can be tested over and over again, e.g. Google used the Matrix to test a new emergency braking system over 10,000 miles.

“In a few hours, we can test thousands upon thousands of scenarios which in terms of driving all over again might take decades,” according to the letter.

How Deep The Rabbit Hole Goes

However, it seems unlikely that Google’s simulator can plan for the nearly infinite possibilities that can happen on the streets. And Google still has some more work to do before they can unleash their cars into the wild. When Google first debuted their prototypes this May, the cars lacked a steering wheel and a working gas pedal. Yet California rules stipulate that a person has to be “capable of taking over active physical control of the vehicle at any time,” meaning Google has to rework their design.

In the meantime, Google has asked the DMV to clarify its rules for testing autonomous vehicles, and the DMV sated that the virtual simulation is not prohibited. Yet the state says that physical testing is still required and that the simulator alone isn’t going to cut it.

Now what we want to know is, if a car crashes in Matrix California, does it die in the real world too? What even is the “real world?”

[The Guardian, The Verge]