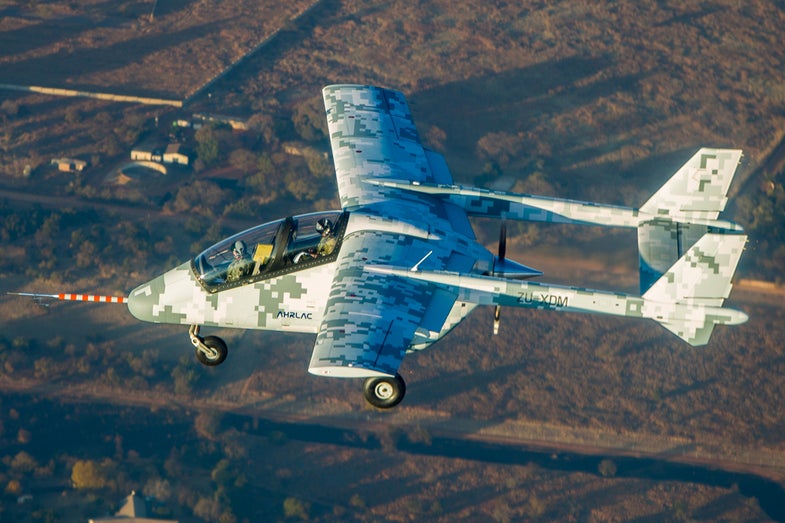 Powered by a pusher propeller, covered in pixel camouflage, and furnished with stadium-seating for its two crew members, the Advanced High Performance Reconnaissance and Surveillance Aircraft (AHRLAC) looks like an alternate history version of a World War I fighter. The result of a collaboration between South Africa’s Aerosud aviation firm and the Paramount Group, the AHRLAC is designed as a cheap alternative to the big name in military surveillance right now: drones.

The AHRLAC is designed for flexible roles, depending on how it’s equipped. These range from surveillance to light attack, which could make it a useful tool for border patrol, some forms of counter-insurgency warfare, and, perhaps most relevantly, anti-poaching activities. The pusher propeller design — in which the propellers are mounted behind their respective engines — helps the plane fly slowly, an important task for surveillance aircraft. (Pusher propellers were also used on the infamous Predator drone.) AHRLAC’s maximum speed is about 310 mph, and it can fly for up to 7.5 hours. It’s made to carry everything from surveillance cameras and radar to rockets, flares, and some missiles.

The manufacturers boast that AHRLAC is the “first ever aircraft to be fully designed and developed in Africa,” though that claim is contested. Several features make it well suited for rural use: A short takeoff distance of only 1,800 feet and high wings mean it can even take off from fields with some underbrush.