Good Idea/Bad Idea: Use A Stun Gun To…

Guess which is which! Hint: one gets you stun-gunned. 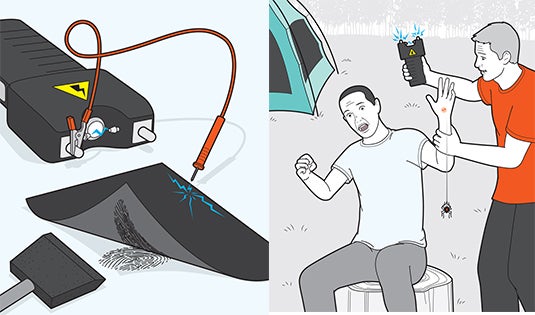 On a hunch, crime scene investigator Richard Warrington, now retired, found a new way to fight crime with a stun gun: lifting prints. Warrington’s hack involves placing a sheet of sun-blocking film over a freshly dusted print. He attaches the loose end of a wired probe to one outer contact of a stun gun. While holding the wire’s probe one quarter inch above the film, he turns on the gun and slowly guides the electricity-shooting probe around the perimeter of the film, electrostatically charging it. Then Warrington turns off the gun, waits 10 to 15 seconds, and glides a foam brush across the film’s surface to attract a reverse image of the print for forensic analysis.

For two decades, survivalist forums and even some doctors have recommended shocking snake and spider bite wounds to neutralize venom. Science says this idea bites: You’re most likely to get burned—and remain poisoned.

_**WARNING: Stun guns are very dangerous, so try the “good idea” at your own risk. And by “bad idea,” we mean never attempt it! **_