Megapixels: Blowing Up a 1,585-Foot Bridge

The 1,585-foot Fort Steuben Bridge spanned the Ohio River, linking Ohio to West Virginia for 84 years, but it took... 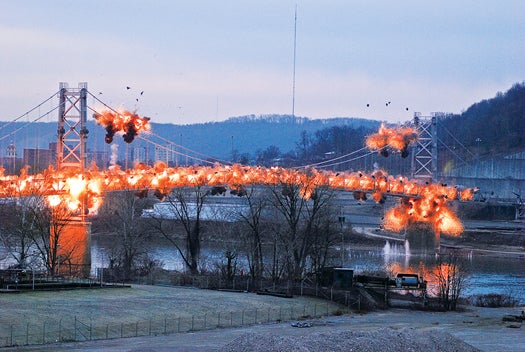 The 1,585-foot Fort Steuben Bridge spanned the Ohio River, linking Ohio to West Virginia for 84 years, but it took just seconds for it to drop in a controlled demolition in February. The Ohio Department of Transportation closed the aging concrete-and-steel suspension bridge in 2009 and finally hired general contractors Joseph B. Fay Company to take the bridge down.

(Traffic that used to pass along the Fort Steuben now crosses the Ohio approximately 1,000 feet upriver on the Veterans Memorial Bridge, which opened in 1990.) After months of planning, over the course of a week, demolition experts placed 153 pounds of explosives, in 490 shaped charges, in 136 locations along the bridge. On demolition day, experts detonated explosives on the stiffening truss. Then they severed the main suspension cables and ultimately brought down the bridge’s two towers.