Inventions: The Piano That Tunes Itself

Tuning a piano, unlike other instruments, is a job for professionals. But what if it could tune itself? 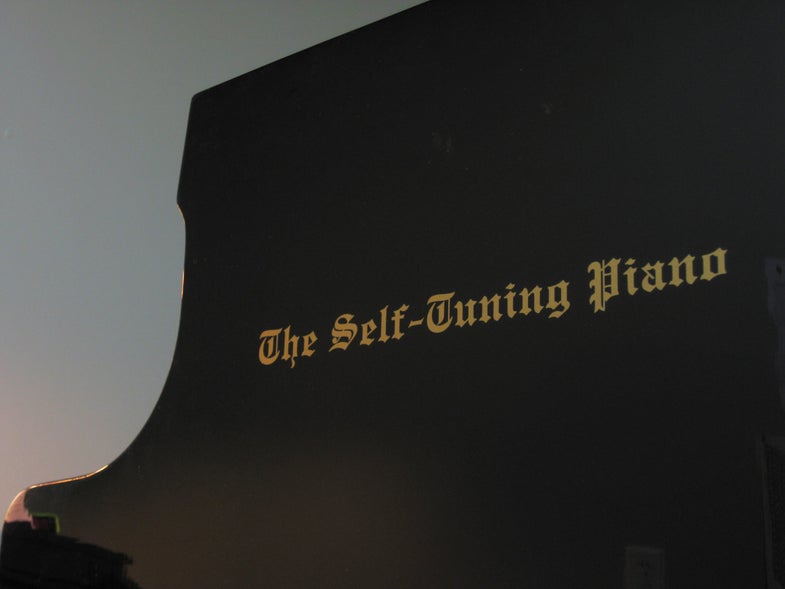 Most musicians can tune their instruments whenever they like. The exception is the pianist, who typically isn’t trained to tune the piano’s 200-plus strings. Instead, both amateur and professional piano players must hire a technician to get their instrument in shape. But Don Gilmore has accomplished an engineering feat that he says could do away with the need for tuners: a self-tuning piano.

Gilmore, a mechanical engineer whose day job is to make customized machinery for the military ammunition industry, started developing a mechanical self-tuning device in 1993. But, a new idea soon overshadowed the project.

One evening as Gilmore sat in his Kansas City home watching a “Cheers” rerun, he had the elusive inventor’s epiphany: why not run a current through each string to change its frequency? So, Gilmore walked over to his pile of instruments—he is an amateur musician from a long line of music men, including a great-grandfather who composed Methodist hymnals and a grandfather who was a bandleader, saxophonist and singer—and grabbed his steel string guitar. He hooked one string to the alligator clips of a variable desktop DC power supply and was able to change the string’s tuning by applying one or two volts.

The same idea, he thought, could be applied to a piano.

First, Gilmore, whose expertise is in mechanics, had to teach himself electronics. He worked through around 12 prototypes before finally coming up with the current version of his electronic piano tuner.

The system starts when the player pushes an “on” button, located on the lower right side, directly under the keys. Next, individual circuit boards activate magnetic coils that simultaneously sustain the notes from all of the piano’s strings. An infrared sensor measures each string’s frequency, or how fast it is vibrating, and a computer compares that frequency with a note that was previously recorded after a tuning by a professional (and human) piano technician. If the original tuning seems off—room size and temperature, for example, can affect how the piano sounds—the owner can retune the piano and save that setting in the computer.

If the pitch needs adjustment, the system sends an electrical current through springs that touch each string’s tuning peg, heating it slightly to around 95 degrees. The heated strings expand, lowering the pitch.

But, the strings can’t be cooled in order to raise the pitch. Explains Gilmore: “The piano is tuned while the strings are warm. When you switch it off, all the strings go sharp (tighter) when they cool, which is its natural state.” So, in theory, the device will never have to increase the frequency in any of the strings.

The system tunes a piano in under two minutes and the device remains on while it is played. Gilmore estimates that the tuner costs seven cents an hour to run.

QRS, a company that makes player pianos, licensed Gilmore’s technology in 1999 (first, the mechanical device, and later, the electronic version). But, the company wasn’t able to put the time and money into further developing the idea, and when the five-year contract ran out, Gilmore decided not to renew.

Today, he’s tinkering with the device on his own, sending CAD circuit drawings to a Sierra Circuits in Sunnyville, California. The process has drawbacks. Once, says Gilmore, half of the chips on the main circuit board were inadvertently soldered on backwards. Another time, Gilmore ran the voltage too high and blew out all of the circuits on another board. Each mistake requires reshipping the circuits between Kansas City and California.

WHO WILL USE IT?

Another problem is who might use the device. Gilmore estimates the price at around $1,000. A regular tuning costs around $100, and the casual player has their piano tuned just once or twice a year. If you break out the cost of keeping a piano in tune daily, the $1,000 price tag isn’t so bad. Still, the average player may balk at the cost.

Concert pianos, on the other hand, are tuned once or twice daily. But, says Bruce Brubaker, Chair Piano at the New England Conservatory, the self-tuning piano might not help. Aside from tuning, two key factors to a piano’s sound are voicing, which impacts the tone, and regulation, which changes how heavy the keys feel. In concert pianos, technicians often service the tuning, voicing and regulation, says Brubaker. While technicians tune more often than anything else, an automatic tuner wouldn’t totally replace them. Changes in a piano’s sound due to room size and temperature could also require extra service.

Kent Webb, the technical manager at piano manufacturer Steinway and Sons in Queens, NY, which also services pianos for Carnegie Hall and the New York Philharmonic, worries about the placement of the circuit board, how well the tuner will match the subtleties of each note and the impact of the heat on the piano’s wood: “We’re always thrilled by seeing people try to do something new with pianos, but we also must look critically at how it is going to affect the long term integrity of an instrument.”

But, if Gilmore can overcome some of these obstacles, “it could be a very marketable and helpful device.”

Gilmore is still looking for a manufacturer, after which he’ll decide whether his invention might be installed when the piano is made, or if it will come as a kit that a user can install at home.

Webb is doubtful that Steinway, one of the few remaining U.S. piano makers, will use the device with its current design. Still, Steinway makes just 2,500 pianos annually. At least a million more are manufactured globally each year, mostly in China, and making The Self-Tuning Piano on a large scale could drive down the price. “Even if I got one percent of that, I’d be tickled,” says Gilmore. 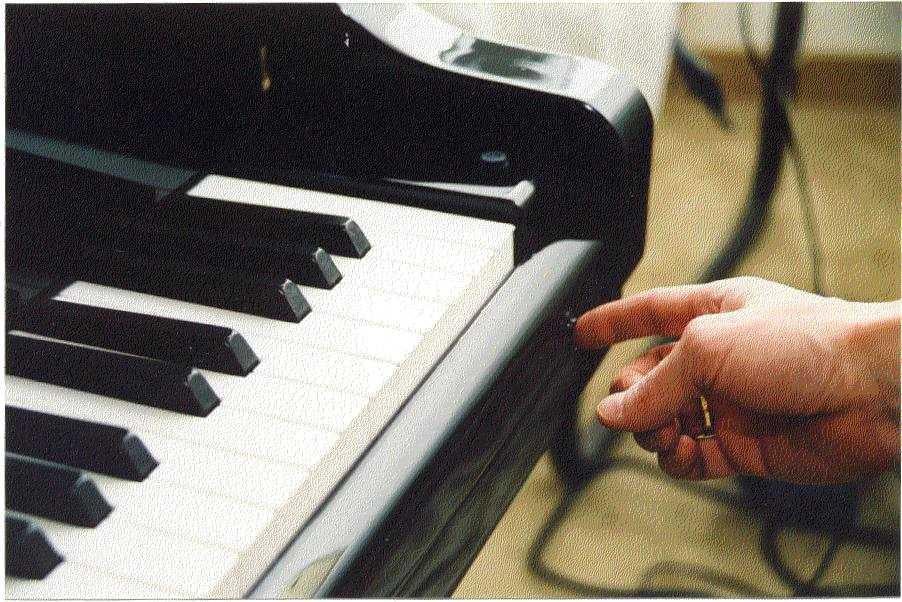 To start the tuning, the piano player simply pushes a button. This signals the self-tuner to sustain each note on the piano simultaneously. 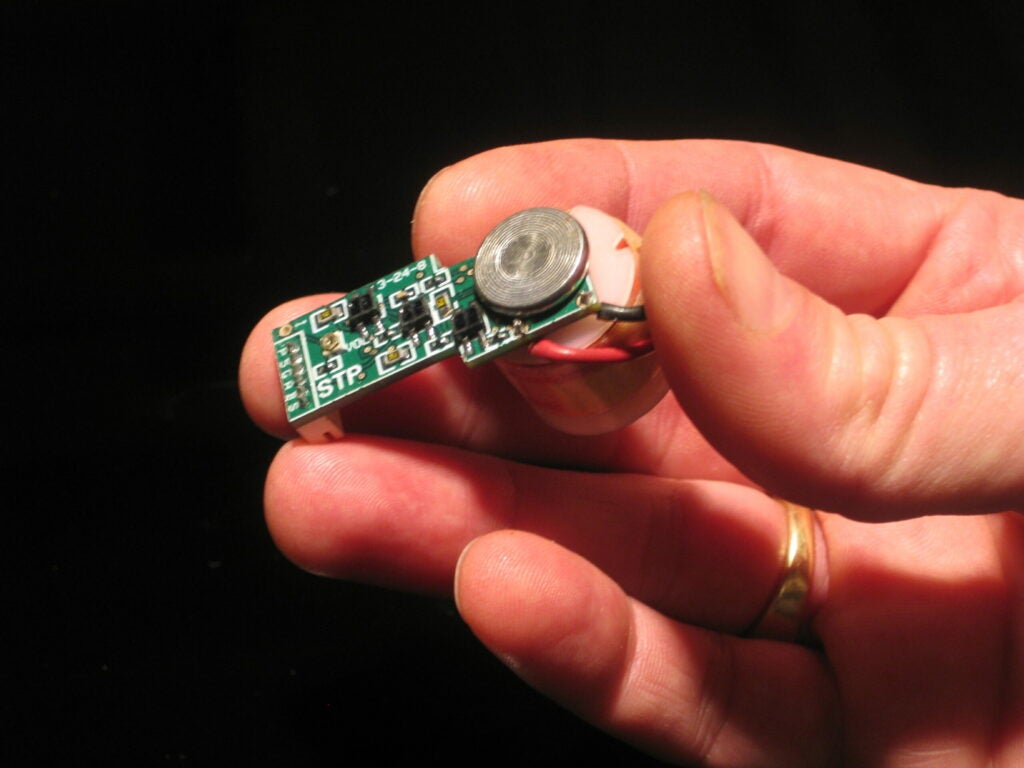 Each note has its own sustainer, which uses magnetic coils to make the strings vibrate, sustaining the sound. Infrared sensors measure the frequency of each string and compare it to a pre-tuned note stored in a computer. If the string is off, the system sends an electrical current through the springs that touch each tuning peg to heat the string, causing it to expand and lower its pitch (the piano is typically already sharp, or at a higher frequency than desired, because of the way it has been pre-tuned). 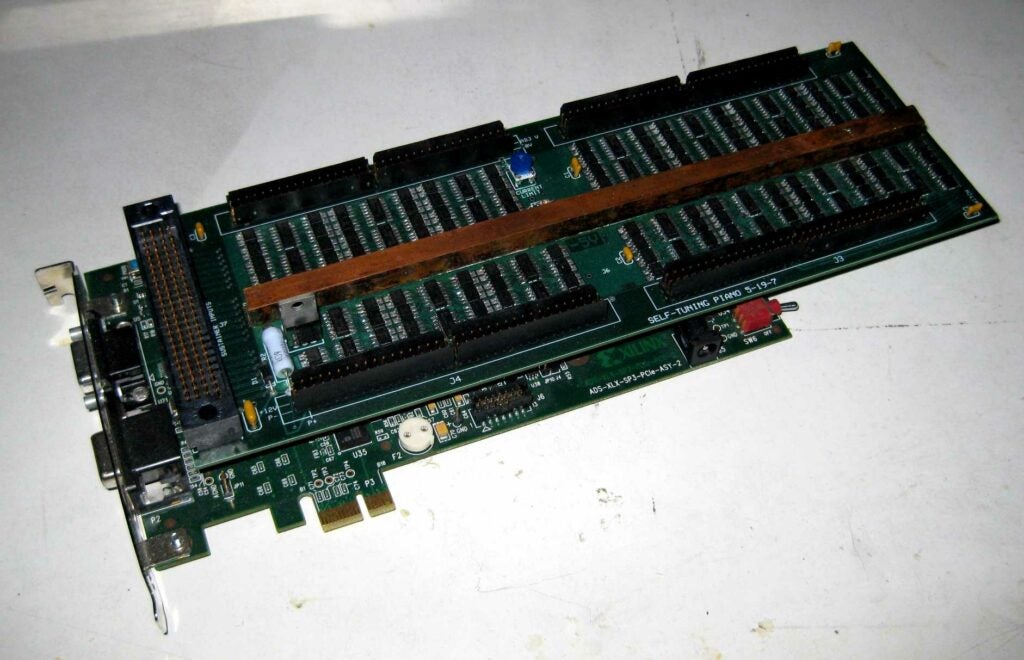 The Self-Tuning Piano’s main circuit board, which controls the current going to each string.

Each circuit attaches to the piano’s strings by these springs. When the system tunes a string, an electric current heats the spring, which heats the string, changing its frequency until it is in tune. The pianos are initially tuned when the strings are warm, so that they tighten (go sharp) when they cool. This way, the tuner is always bumping them down to the correct note. 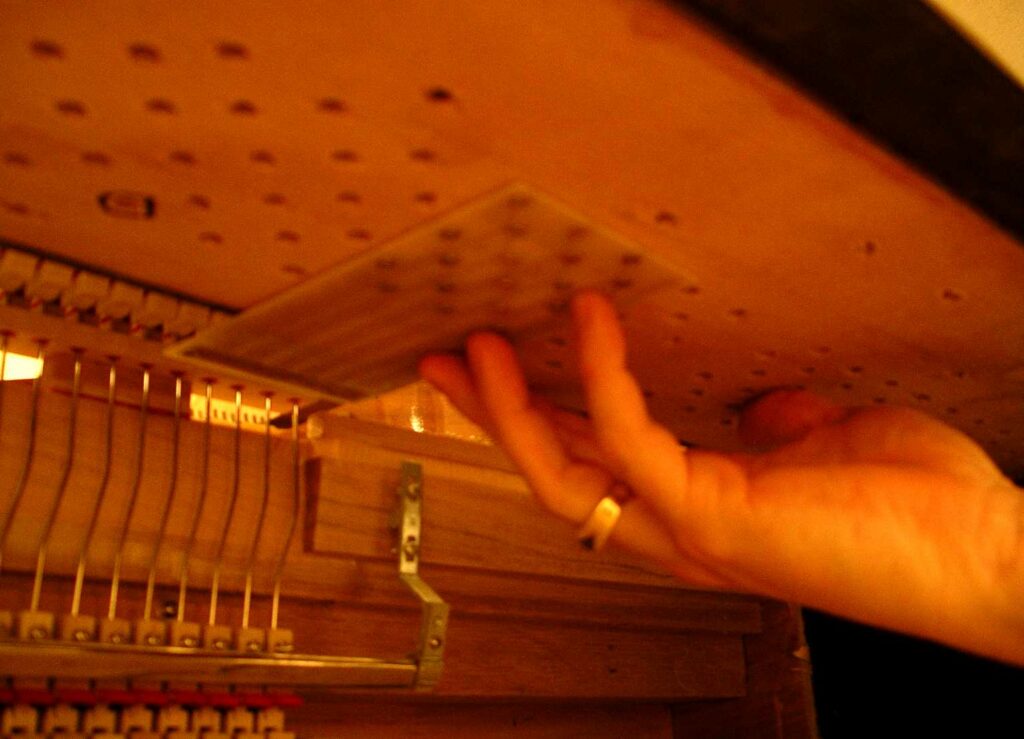 The springs are installed in the pinblock, which is typically made of hard wood and keeps the piano’s tuning pins secured. The springs touch the tuning pegs through the pegs’ pre-drilled holes. 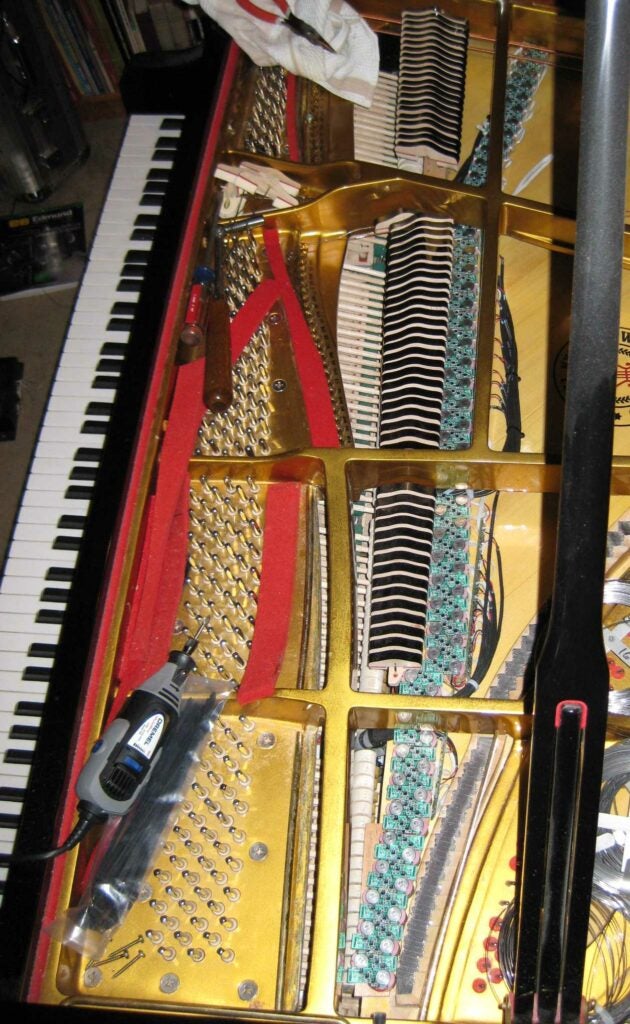 The device fully installed. Gilmore isn’t sure if the self-tuning piano’s circuit boards will eventually be installed when the pianos are manufactured, or if it will come as a kit that users can install on their own. 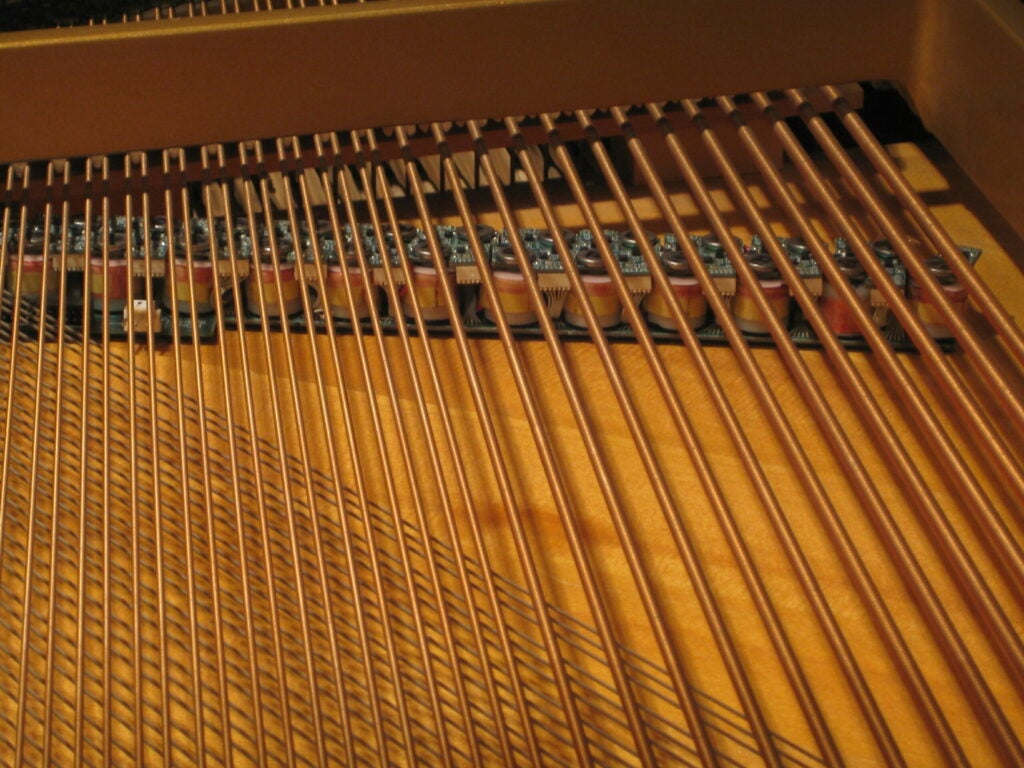 A close-up of the circuits that are attached to each of the thick, copper-wrapped base strings.
feature
inventions
june 2012
music
pianos