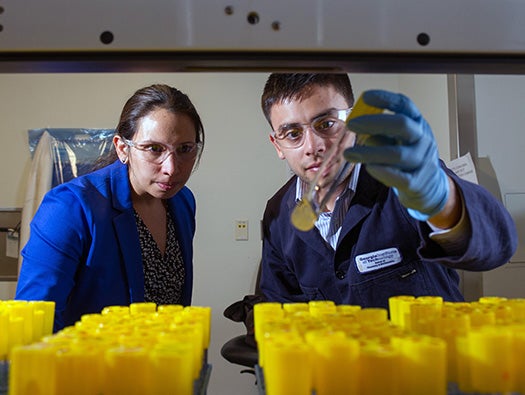 In an effort to launch things skyward in a more sustainable way, researchers have coaxed bacteria to produce a highly combustible compound called pinene. Conifers naturally excrete the stuff in their resin, lending the plants part of their distinctive scent. Pinene* also happens to rival the properties of JP-10–a liquid rocket fuel that’s widely used for commercial and military launches.

So, pretty soon a rocket or missile flying overhead might spew exhaust that smells like pine trees.

JP-10 and other energy-dense rocket fuels are derived from oil and don’t come cheap. (The cost of JP-10 is about $25 per gallon and rising as oil demand grows.) Meanwhile, no biofuels today can compete with traditional rocket fuels on the market. Although ethanol derived from corn, for example, can more or less replace gasoline, even the latter and more energetic fuel packs about 20 percent less punch per gallon than JP-10.

A breakthrough in rocket-compatible biofuel came in 2011. That’s when the Navy discovered chemicals that link together, or dimerize, two molecules of pinene into a fuel with properties similar to JP-10. Because leveling pine forests to extract a little pinene isn’t practical, however, researchers have since sought alternative production methods.

The new research effort–a joint venture by Georgia Tech and the Department of Energy’s Joint BioEnergy Institute–builds on the work of the Navy by offloading pinene synthesis to bacteria. The group genetically engineered E. coli bacteria to produce conifer-derived proteins that assemble pinene.

Stephen Sarria and Pamela Peralta-Yahya, two Georgia Tech researchers who collaborated on the new work published in ACS Synthetic Biology, broke down the process for Popular Science in four steps:

First, the researchers picked two groups of enzymes–pinene synthases and geranyl diphosphate synthases–to produce molecules of pinene. Second, they inserted genes that code for the enzymes into the DNA of E. coli (chosen because it’s one of the easiest bacteria to genetically engineer). Third, the team grew up the bacteria in large fermenters, “very similar to how you’d make beer,” Peralta-Yahya said. With the brewing of pinene complete, they used the Navy-discovered chemicals to dimerize pinene molecules into rocket-ready fuel.*

For now, the team is trying both methods in hopes of making a “drop-in” biofuel that’s cheaper and more sustainable option for launching rockets or missiles without changing engines or existing infrastructure.

Correction: Pinene dimers have a similar high energy density as the JP-10, not pinene.

Correction: The Navy research introduced the technique for dimerizing pinene but the research team did not proceed to dimerize pinene in their experiments.