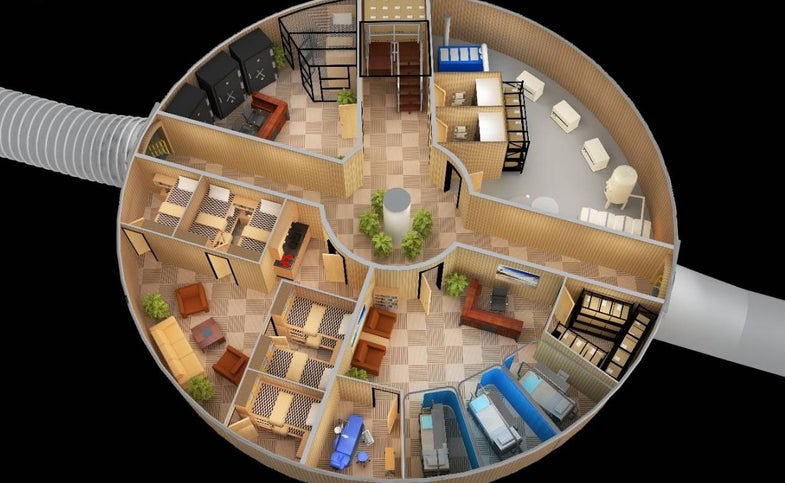 A doomsday bunker envisioned by California company Vivos can offer you, your family, and 4,000 other people the chance to escape the end of the world in a network of 20 underground shelters. Surely even the skeptics can’t resist the allure of scary music played over scenes of comfortable underground habitation, as NPR’s All Tech Considered reports.

The company claims to be a privately-funded venture with no religious affiliations, except perhaps to the gods of commerce. It certainly takes an agnostic view by listing all the possible reasons why you might want to pony up and help build those $10 million bunkers, including predictions by Nostradamus, the Mayans, the Hopi, and the Bible.

That’s not to say that we don’t like our apocalypse-survival equipment, but Vivos goes all out by promising a survival shelter stocked with power generation, water wells, filtration systems, sewage disposal, a year’s supply of food, security devices and medical equipment.

Of course, you’ll need all that if you believe disaster may strike at any moment because of a polar shift, super volcano eruptions, solar flares, nuclear war, and “even the return of Planet X (known as Niburu or Nemesis),” Vivos cheerfully states.

Did we mention that there’s a 2012 countdown clock on the company website?

We do have to appreciate the small touches, such as the Vivos logo on one of the communal dining room screens, because nothing cheers up post-apocalyptic survivors like a friendly reminder of the corporation that they paid to save them. Let’s just hope the grateful customers don’t get jealous of whatever mineshaft space Vivos has saved for itself, and go out looking to close the mineshaft gap.

[via All Tech Considered]