It's a first step toward building more flexible body armor 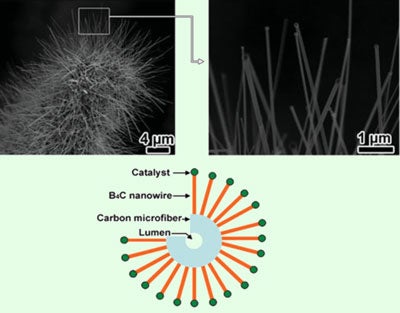 The boron carbide that forms body armor plates and helps protect battle tanks has now become a part of T-shirt fabric. The reinforced nanocomposites could eventually lead to more flexible body armor or lightweight materials for cars and aircraft, according to Chemistry World.

Scientists in China, Switzerland, and the U.S. hit upon the idea of weaving cotton fibers together with boron carbide nanowires. Cotton T-shirt samples were soaked in a solution containing boron powder and a nickel-based catalyst, and then heated to 2012 degrees F (1100 degrees C) under a stream of argon that prevented the material from burning.

The cotton fibers changed to carbon fibers during the process, and reacted with the boron powder to create boron carbide. By using the woven cotton T-shirt as a template, the scientists solved a previous problem where boron carbide nanowires would bunch up.

Outside experts have deemed the approach promising, if not yet ready to replace Kevlar or conventional bulletproof materials. But the boron-carbide nanowires already show some material improvement over more brittle boron-carbide composites.

“The boron-carbide nanowires we synthesized keep the same strength and stiffness of the bulk boron carbide but have super-elasticity,” said Xiaodong Li, a mechanical engineer at the University of South Carolina.

Such flexibility could differentiate future generations of the material from other examples of future armor or structural reinforcement. And as an added bonus, the boron carbide material keeps out those deadly UV rays from the sun.