Like a Band-Aid that keeps track of your activities 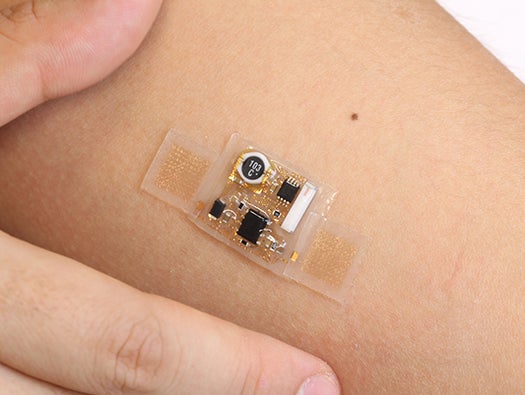 Bracelets or belts that track your activity and vitals may soon be a thing of the past. Engineers from the University of Illinois at Urbana-Champaign and Northwestern University have produced a health-monitoring device that looks like a Band-Aid. The thin, soft patch can stick to and move with the skin, all while wirelessly sending vital updates to your designated cellphone or computer.

To track physiological signs, you need hard integrated circuit chips, rigid sensors, batteries, and other electronic components. The skin, on the other hand, constantly moves around, so wearable electronics that stick to the surface have long been an engineering challenge.

The research team, led by John A. Rogers of UIUC and Yonggang Huang of Northwestern, has found a way of embedding hard chips inside skin-soft patches that move with the skin. Their findings are published in the April 4 issue of Science.

The chips used in the device are made of silicon with a plastic casing. A thin membrane made of silicone rubber encloses the chips. Within this enclosure, a silicone fluid permeates around the chips. The plastic casing of the chips isolates the active components from the fluid, and the fluid itself is an electrical insulator, so it doesn’t influence the behavior of the devices.

To ensure the device doesn’t break while stretching with the skin, the team used an origami-inspired design in constructing the electrical wiring. Essentially, the wiring is in a folded-up configuration that can unfold in a very controlled yet natural way as the device stretches with the motion of the skin. The crucial part is the unfolding process, as it allows the distances between the chips to change without disrupting the wiring interconnect.

Moving forward, the team hopes to improve the device’s ability to cope with overstretching, and to develop biochemical sensors for the device. For example, the ability to sample sweat coming out of the skin and being able to do chemical analysis on that sweat on the spot can open up a whole new range in the realm of health monitoring. Professor Rogers is a co-founder of MC10, an electronics startup company responsible for pursuing commercialization for the device, and he hopes to unveil a commercial product within two years.

Here is a video demonstration of the device, showing its flexibility.