While so many scientists spend their time trying to create nanobots the size of bacteria, researcher at the NanoRobotics Laboratory... 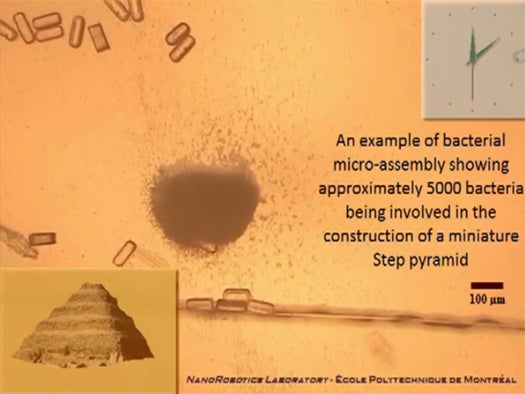 While so many scientists spend their time trying to create nanobots the size of bacteria, researcher at the NanoRobotics Laboratory of the École Polytechnique de Montréal, Canada, decided to simply take direct control of live bacteria. By using a computer-controlled magnetic field, the researchers turned the bacteria into fully-compliant biological nanorobots.

The trick was using a type of microbe known as magnetotactic bacteria. These critters have little internal compasses, and will follow the pull of a magnetic field. By manipulating a magnetic field, the researchers tricked the bacteria into forming a giant, computer-controlled swarm. In one experiment, the researchers had the bacterial swarm assemble a small pyramid. In another, they directed bacteria through the blood stream of a rat, like in Innerspace.

In the future, the researchers want to use the bacteria as a propulsion system for larger nanorobots that could deliver drugs, repair an organ, or assemble larger and more complex nanostructures.

But, as I mention with every video, don’t take my word for it when you can check it out for yourself! In the video below, you can actually watch the bacterial swarm assemble a tiny pyramid: