Race on Sunday, drive your human to work on Monday 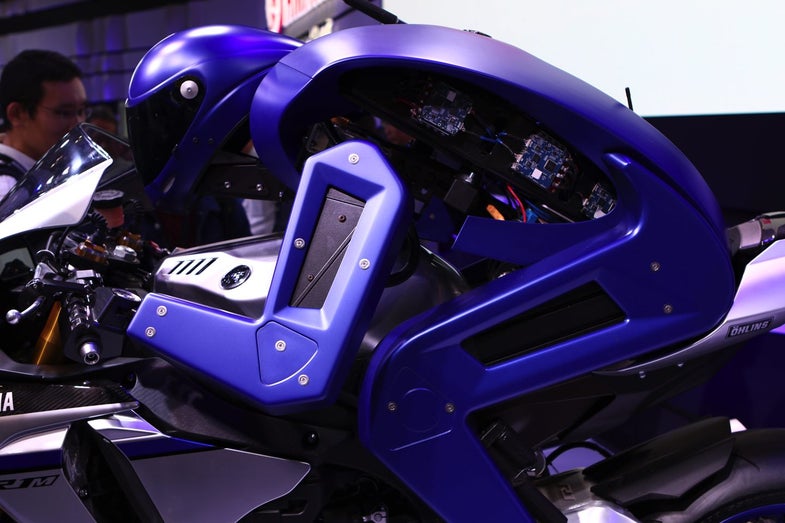 Manufacturers often bring celebrities from motor sports to auto shows to glam up the booth and offer photo ops. Yamaha brought a racer to the 2015 Tokyo Motor Show this fall, one who had the audacity to challenge one of the winningest motorcycle racers in the world, Valentino Rossi. “I was created to surpass you,” said this cheeky racer in a video.

The thing is, the racer is a blue plastic humanoid robot with actuators instead of muscles and tendons. Yamaha engineers want to first get Motobot, as they call the rider, to hit 100 km/h (62 mph) in a straight line on a regular motorcycle—throttle, clutch, and all. Then they’ll teach him to corner and run a slalom. Then, they’ll turn him loose on a racetrack, where Motobot’s machine learning systems will allow him to incorporate data acquired on each lap of the track to improve his times.

The goal is for Motobot to exceed 200 km/h (124 mph)—and do it better than fellow Yamaha racer Rossi.

Barely a month after Motobot issued his challenge, Formula E announced that its electric racing series would add a support race where the cars are all autonomous. Roborace will run before the human-piloted race in the 2016–2017 season on the same circuits the main event will be using. The Roborace teams will use two electric cars to run a one-hour race, just like the Formula E teams, and the cars will be identical to each other. The difference in Roborace events will be the artificial intelligence and machine learning capabilities of the driverless vehicles.

The end goal of both Motobot and Roborace is to improve the safety and viability of autonomous vehicles of the future. If a driverless car can complete a race lap or 40 at speed, it can probably drive you to work while you answer emails.