500 Women Scientists, and counting, are changing the face of the field 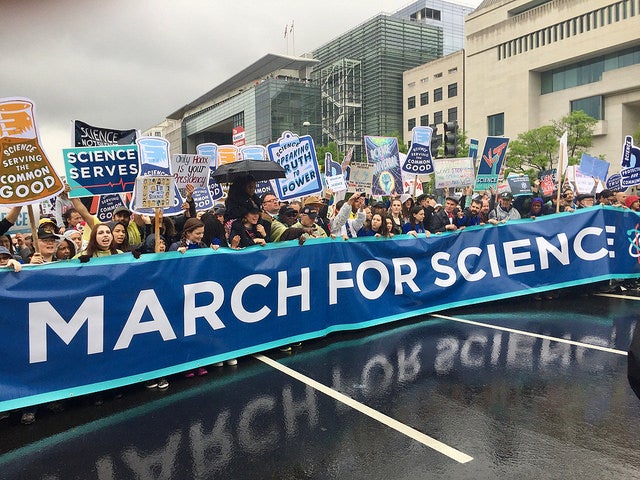 Maryam Zaringhalam has a PhD in molecular biology, and—among other things—-she just wants to be able to make poop jokes on Twitter without people questioning her competency as a scientist. “People don’t always recognize that scientists are human beings,” says Zaringhalam, who is part of a grassroots group called 500 Women Scientists.

The group aims to redefine what a scientist looks like, and who a scientist can be. Through advocacy, mentorship, and public outreach, their goal is to break down the barriers that keep women out of STEM fields.

“When you’re in science, you’re forced to sacrifice and squash down all your other identities if you want to be a pure, objective scientist,” Zaringhalam says. The cultural expectations of who an objective scientist is—a cisgender, heterosexual, white, able-bodied male, Zaringhalam explains—means that a lot of women, especially women of color and those on the LGBTQ spectrum, feel pressure not to talk about their struggles and the obstacles that they face in the profession.

Zaringhalam herself found it difficult to talk about the impact of the federal government’s travel ban in January of 2017 until she found a community in 500 Women Scientists. “It’s a disservice to say that the travel ban has nothing to do with science,” she says, because it erases the fact that many scientists in the United States are immigrants, as are potential scientists impacted by such federal policies—like her own parents, who immigrated from Iran. “People who were advocating for social justice issues, or diversity, equity, and inclusion, were told that we were playing identity politics,” she says, an accusation that’s often used to dismiss or downplay the extent of problems faced by identity groups within an organization or institution. “We’re shushed because that’s not science—even though it’s very wound up in who gets to do science.”

And making sure that everyone has an equal chance to get involved in science isn’t just about social justice. Science suffers without diversity. Gender and racial biases limit our understanding of how the human body functions, for example. Because clinical trials often don’t strive for gender parity among subjects (even when non-human animals are involved), we don’t know as much about the way women’s bodies react to medications as we do men’s. The products designed for women often aren’t functional or comfortable until women step in and re-engineer them. Women from the Global South—who are often the first to face issues like water scarcity—bring vital perspectives about the inequalities of climate change, but they often don’t feel welcome in spaces domianted by white male scientists who might otherize them because of their nationality, accent, or race.

On the opposite end, having a monolithic set of scientists means that people who are supposed to be served by scientific findings might feel mistrust toward scientific institutions. “Certain populations remember when they were abused by doctors, like the Tuskegee syphilis trials, which were not that far in the past,” Zaringhalam points out. In the 1930s, the federal government allowed scientists to study the progress of syphilis in unwitting African American subjects, who were told they were receiving free healthcare.

Having more women, people of color, LGBTQIA individuals, and scientists of other marginalized identities won’t magically solve these problems overnight. But it’s a goal worth working for nonetheless, simply because more people, with various backgrounds and insights, expand the types of questions that get asked and the solutions that come out of scientific inquiry. “A scientists’ experiences in life inform the kinds of research that they’re interested in,” Zaringhalam says. “In order to have a fuller, richer science, where we’re tackling a broad set of questions and bringing a broad set of solutions, we need a broad set of scientists.”

To build up that broad set of scientists, the walls keeping women out of science have to be broken, and the reasons that women leave science need to be addressed. One focus of 500 Women Scientists’ advocacy has been the prevalence of sexual assault and harassment in the field.

50 percent of women in STEM fields say they have experienced discrimination in their workplace, according to the Pew Research Center. That number rises to 78 percent for women in majority-male work environments. The thousands of repeated occurrences of microaggressions, or comments about race, gender, sexuality, ability, and other identities, are hidden in those data points. These comments usually aren’t physically threatening, but can take a toll on self-esteem and mental health.

“In some ways, the experiences of women in science aren’t that different from what women experience in other industries,” says Rukmani Vijayaraghavan. She’s a postdoc in astrophysics, and a member of 500 Women Scientists’ accountability team. “But in some ways, it’s more complicated because science and academia are so hierarchical,” she says.

Graduate students are often paired with mentors who can make or break professional careers. And even if women do choose to report inappropriate or predatory behavior, Vijayaraghavan says, universities have historically been slow to penalize professors who bring in millions of dollars in grant money. That’s why the accountability team advocates for change at the institutional level—the burden shouldn’t be on women to be brave and publicly tell their stories of assault, but universities should work to implement policies and procedures that are more effective at holding harassers accountable, Vijayaraghavan says.

These are the problems that women who are already in science face. For young women and students, barriers of entry can dissuade talented minds from pursuing the field at all. Vijayaraghavan teaches a middle school summer camp to encourage girls to explore their interests in science, since they might not have that mentoring otherwise. Wendy Bohon, a geologist and another member of 500 Women Scientists, says that her elementary-school-aged daughter has already faced implicit and explicit bias from peers and educators about her interest in science. “The barriers are there early,” she says. “Girls are steered away early, and undergraduate women are seen as less knowledgeable as men.”

Bohon’s work with the organization is driven by solutions, and offering actionable items to challenge the status quo. Local chapters of the organization have connected with schools, bringing women scientists into classrooms where some students may have never even met a scientist at all. “The first scientist they meet could be an underrepresented minority scientist,” Bohon says, and that’s where change really starts.

The organization offers a database of self-identifying women scientists (which far exceeds 500, although the name has stuck) as a tool to journalists and educators. By amplifying the voices of women, women of color, LGBTQ women, and others, Bohon says the platform has the potential to challenge the status quo. In professional settings, it’s common to see all-male panels, (or manels) even on topics like women’s health. And journalists might not prioritize representation in their stories, perpetuating the skewed view of authoritative white, male scientists.

“We’re not trying to say, you’re sexist, you’re a bad person when you’re [organizing conferences] and think of experts, you think of men and white men,” Bohon says. “All you have to do is make these small changes and it can have a huge impact on the way that scientists are viewed.”

And Bohon herself had a personal win at the last conference she attended for the American Geophysical Union. “For the first time in my life, I heard white men talking about microagressions,” she says. A male colleague intervened when another male colleague commented about Bohon’s appearance instead of her research—and Bohon’s jaw dropped. “I think the conversation is finally changing,” she says. “Men can also be allies. We need everyone on board.”