You might be able to outrun a T. rex, but only in a sprint

Which is really just a brisk walk for the dino. 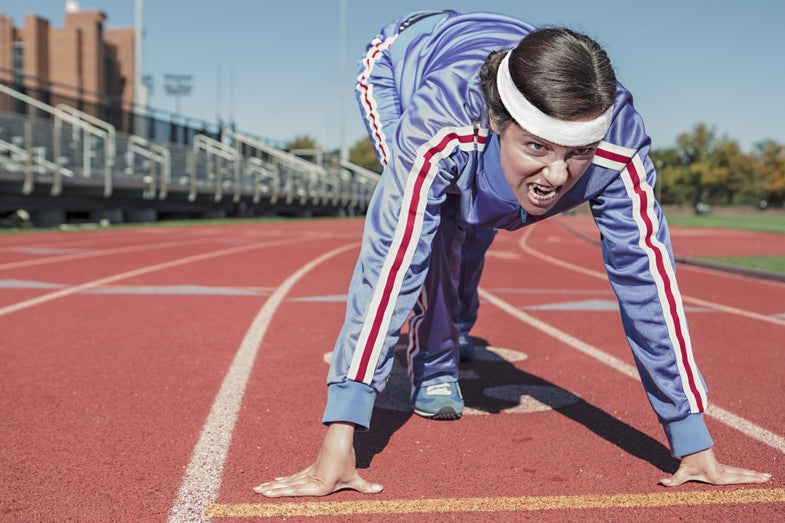 It seems like a lady as large as a Tyrannosaurus rex should be able to outrun you. She may have a big head and little arms, but she’s still got massive gams to propel her through the jungle. Alas, her quads are no match for the average human’s—at least in the short term.

This info comes to us from two (count them, two!) studies about T. rex running speeds that were published this week. One, in the journal PeerJ, developed a mechanical model for how the fearsome dinos could have sprinted. The other, in Nature Ecology & Evolution, established a mathematical model for almost 500 animals to explain why the largest animals aren’t the fastest. Did the authors have to include dinosaurs, for whom we can’t gather direct data? No. But come on… wouldn’t you? More importantly, it provides a way to predict the top speed of species that are now extinct.

It seems like common sense that the largest animals should move the fastest. They have the largest muscles, after all. But that’s not the case. Cheetahs are far from the biggest animals on the planet, but they top the charts at around 70 mph. Larger animals, it turns out, simply can’t reach the zippy speeds their muscles should theoretically be able to propel them to—they tire out long before that. An elephant’s enormous legs have far more fast-twitch muscles (the kind that help you sprint), but the massive beasts run out of oxygen before they can use those fibers optimally.

Which is why a T. rex probably tops out around 12.4 mph. That’s what the mechanistic model predicted, anyway, specifying that such a speed would only be a brisk walk for our lady monster. True running would have put such high loads on the dinosaur’s skeleton that it likely stuck to power walking. The mathematical model in the other study calculated a slightly higher max speed of around 16.8 mph. A top high school sprinter could definitely beat the lower estimate, and professional sprinters could put even the higher average in the dust. Usain Bolt would demolish it—his maximum speed is 27.8 mph. That’s all in the short term, though. What would happen if that power-walking T. rex kept going after you? What if your race against becoming dino dinner wasn’t a sprint, but a marathon? Not even Usain Bolt can keep up his top speed forever.

The lowest possible time to qualify for the NYC Marathon this year puts you just over 9 mph, which would make you T. rex food if the dino decided to keep up the chase. Even the world’s top marathoners would have a tough time. The winning time in 2016 was 2:07:51, which comes out to around 12.4 mph. That’s exactly how fast the dino behind you would be going. And a younger T. rex could probably go even faster, since its smaller stature would help its speed.

Velociraptors, though they can’t open doors, would have no trouble eating Usain Bolt. They would have been able to run at about 34 mph thanks to their small body mass and limber legs, according to the new research. If it helps you feel better, pretty much anyone could beat a brachiosaurus—they only moved at top speeds of around 7.5 mph—though it’s hard to imagine why Littlefoot’s herbivorous mom would want to chase you.

So yeah, maybe the T. rex couldn’t technically “run.” But if its brisk walk could still beat the average marathoner over any significant distance, then we should probably still respect the heck out of it. Think of how many steps you’d have to take to match one of its gigantic strides. Maybe it can’t jump right out of the starting gates, but once it gets up to pace you’re almost certainly dead. Your best bet would be Jeff Goldblum in a truck (preferably one with post-workout snacks inside). Otherwise, we’re all screwed.