Zoo Monkeys Have Human Bacteria In Their Guts 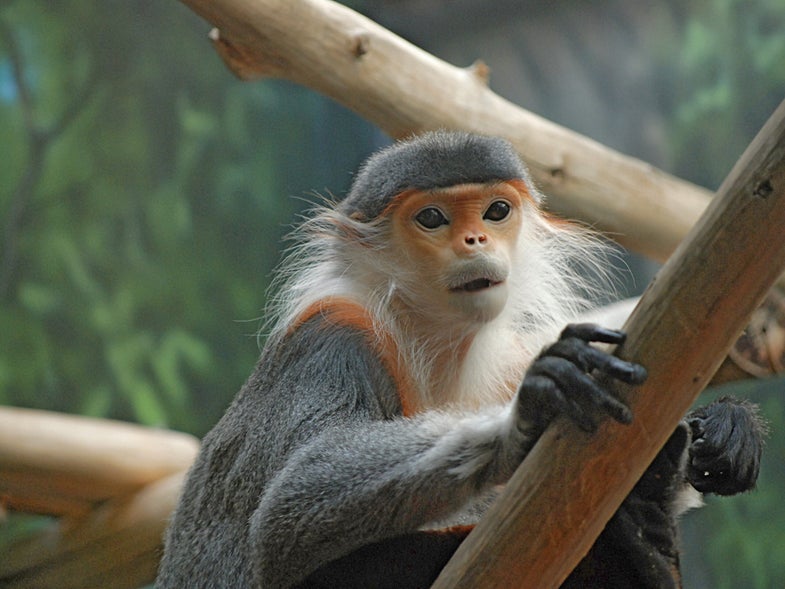 You can take a monkey out of the forest, and it turns out, you can take the forest out of the monkey too. When monkeys are kept in captivity they lose most of their natural gut microbes, a new study published today in the Proceedings of the National Academy of Sciences (PNAS) has found. That’s probably because in zoos, their diverse, plant-based diet is stripped away.

Hoping to learn how diet, lifestyle, and exposure to antibiotics might affect primates’ guts, a team of researchers from the University of Minnesota compared the poop of two wild monkey species, the red-shanked douc and the mantled howler, to that of their captive counterparts in several zoos across three different continents.

They discovered that zoo monkeys lost almost all of their native gut bacteria, and that their guts had become populated by a new set of far less diverse bacteria. Though wild monkeys have species and location-specific microbiomes, the new bacteria acquired by captive monkeys was the same in both species studied, regardless of the location of the zoo. And surprisingly, the new bacteria matched the kind living in modern human guts. But that may not be a coincidence.

What captivity has done to the monkey gut, the modern Western lifestyle has done to ours. People who live traditional lifestyles have a wider array of gut bacteria, and studies suggest this is due in large part to their fiber-rich, plant-heavy diet. Studies suggest that changes to the microbiome due to the Western diet may contribute to a number of diseases including obesity, heart disease, and diabetes.

“We don’t know for certain that these new modern human microbes are bad, but on the other hand, many studies are now showing that we evolved together with our resident microbes,” computer science and engineering professor Dan Knights said in a statement. “If that is the case, then it is likely not beneficial to swap them out for a totally different set.”

In the wild, the monkeys ate up to 57 different plant species, the researchers found, while in some zoos they might only eat one. The wild monkey poop they tested contained up to 40 percent plant DNA; captive monkey poop had almost none.

“We think this study underscores the link between fiber-rich diets and gut microbiome diversity,” Knights said.