Futuristic Predictions From the Past That Steve Jobs Fulfilled

Steve Jobs's biggest achievements make us feel like we're holding the future in our hands--and sometimes, it's just the future we had hoped for 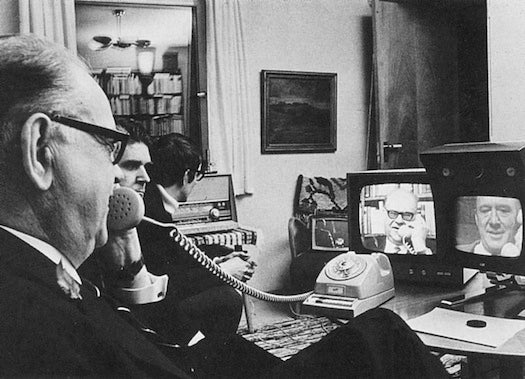 Predicting the future of technology is often a shot in the dark. But every once in awhile, the complex evolution of tech gives us something that actually fulfills the starry-eyed dreams of years or decades before. And as we look back at the incredible achievements of Steve Jobs, you quickly see that, more than any other single innovator, he was responsible for so many of today’s real-life consummations of past predictions.

The first real instance of a videophone debuted at the World’s Fair in 1964, albeit in a pretty primitive form–the picture only refreshed once every two seconds, for example. But it remained in the public eye, with prominent appearances in movies like 2001: A Space Odyssey. In the decades since, we’ve never really embraced video chat to the same extent as voice or text chat, but it still evolved. Skype began allowing video chat in 2006 for desktop computers, and later expanded to mobile apps. With the explosion in popularity of smartphones, apps from Skype and others popped up, but none did it as seamlessly and simply as Apple’s Facetime, which debuted in 2010. Jobs himself cited The Jetsons when making the first Facetime call to Jony Ive during the first keynote demonstration of the feature.

Voice command and speech recognition are existing, even old technologies, but the idea of a personal, artificial assistant that could understand and respond to your comments and questions has long been just out of reach–and has also been a mainstay of sci-fi, from Star Trek to 2001: A Space Odyssey. Apple’s integration of Siri into the newest version of iOS is the closest we’ve ever been to this vision–a vision even Apple has dreamed of for decades.

In 1987, Jobs was no longer at Apple, having been ousted by the board in 1985. But the company showed off some predictions from the future, in that silly earnest way of the mid-80s, called Futureshock. This one, showing a personal assistant tablet-like device, has a remarkable similarity to Siri.

Earlier than just about anyone else, Jobs began changing the way we interact with our gadgets, pushing toward natural human interfaces with touch. Touch gestures have infiltrated every aspect of Apple’s hardware, from portables to even the mouse, and the software has taken a turn to better respond to those controls. Take a look at this video, another example of that 1987 “Futureshock” concept series. Specifically, look around 3:25:

Coverflow, which, like Siri, was not a Jobs creation but a Jobs purchase, was divisive, but a major step towards making computing feel more natural. Why browse through filenames when you can swipe through photos? After all, what’s more pleasurable: leafing through a photo album, or consulting a table of contents?

Though the internet hasn’t been around very long, it quickly became indispensable–and so we immediately began dreaming of a way to carry it around with us in our pockets. Constant connectivity is a major world-shift in communications, reference, and utility, and it all starts with mobile web browsing.

The iPhone did not, of course, invent mobile web browsing. WAP browsing had been around for years, and even more sophisticated versions had been available with pre-iPhone smartphones like the BlackBerry and Palm Treo. But the iPhone was the first to truly deliver the full browsing experience on a cellphone–the (for the time) huge screen, fast panning, and natural navigation made it something totally new. Although, it wasn’t created in a vacuum.

Jakob Nielsen, a veteran of Sun Microsystems (and recipient of several glowing epithets about his prominence as a thinker on web usability, including “czar,” “king,” “guru,” and, best of all, “Usability Pope”) wrote in his “Predictions for the Web for 1999” that “Mobile access will be the third Killer App for the Internet after email and Web browsing.” Somewhat optimistically, he predicted that “During 1999, it will become common to access the Internet from portable devices with a wireless modem.” But while the physical data connection may have been possible much earlier, mobile web browsing wouldn’t become truly mainstream until the iPhone.

Another go-to concept for sci-fi, and another real-life gadget that had existed before a Jobs released his version–but that seemed hopelessly, instantly clumsy when Jobs showed his. The iPad was the device that finally brought tablets to the mainstream, but it also may be the shape of things to come–simpler gadgets, operating by touch, living in the cloud.

There are so, so many examples of sci-fi tablets–check out Gizmodo’s compliation for some good ones–the example that always comes to mind for us is the fictional Hitchhiker’s Guide to the Galaxy, an electronic book that features heavily in the real-life book/radio/film series of the same name. The Guide isn’t a book so much as a digital repository of lightly curated information, called up by a voice search, which is theoretically compiled by one group. But more practically, wrote author Douglas Adams, “most of the actual work got done by any passing stranger who happened to wander into the empty offices of an afternoon and saw something worth doing.” That’s a surprisingly apt description of the App Store, and the Guide itself–a repository of all knowledge, constantly expanding, in multimedia digital form–is more than a little reminiscent of the iPad.