Get gorgeous with the cutting edge of twentieth-century technology 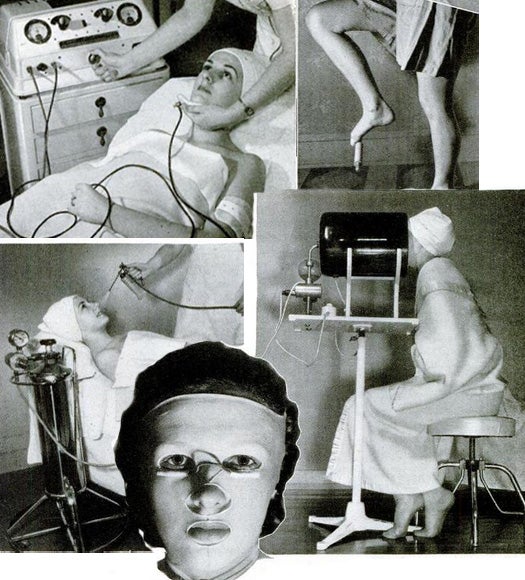 Despite having a readership made up mostly of men, Popular Sciences of old knew their way around a beauty parlor. Especially from the 20s to the 40s, PopSci offered makeup tips and advice to female readers, saying in effect “Look! We’ve got incredibly detailed cutaways of how things work AND beauty knowhow! What more could you want?”

What, indeed. This week’s archive gallery takes a look at Popular Science’s best beauty advice, some of which is spot-on (use a stencil to keep your lipstick from smudging!), some of which is less so (electrocute yourself to get rid of a double chin!).

This “steam-box,” meant to open pores, improve circulation and soften the complexion, received a simultaneously clinical and horrified analysis from our writer. “It is safe to say that some of the results obtained have been at the cost of physical discomfort,” the story reads. Of course, not much has changed since the 1920s. When you consider the waxing, the plucking, the surgery and Lord knows what else women do to themselves today in the name of beauty, sticking your face in a warm box of steam doesn’t sound so bad.

Putting on lipstick is a tricky business. You’ve got to blot, do the thing where you mush your lips together and sometimes even then it bleeds and makes you look like Bozo the Clown. PopSci was happy to step in and help its female readers keep from being recruited by Ringling Brothers by suggesting they just make a stencil. Then they wouldn’t have to worry about such rudimentary things as coloring inside the lines. In fact, we thought this was such a great idea that we suggested it not just once, but twice. Once in 1925 and once in 1938.

In the introduction to a review of a book that covered the entire scope of man’s invention, from prehistoric times up to the then-present, our writer described the first beauty parlor as being outfitted with clamshells, sharks teeth and a sharp-edged flat stone. “With such tools our ancestors gave themselves the first haircuts,” the story reads, but we struggle to see exactly how. Maybe they combed their hair with the sharks’ teeth, held it between the clamshells and sawed through it with a rock?

“In an effort to improve the faces and figures of the nation’s women, inventors have answered the call for mechanical aids in the war on wrinkles, double chins, sagging muscles and rough complexions,” this article reads. If it is indeed a war, then this is indubitably the torture chamber. Sure, a lotion-soaked skin mask doesn’t sound so bad. And yeah, it’s pretty weird, but I’m willing to pick up a mini rolling pin with my foot in order to “limber up the toes,” something I never knew I needed to do until now. If pressed, I will perhaps stick my face in the “vapor bath,” but I’m definitely going to pass on the “skin oxylation treatment,” in which a beautician sprays your face with compressed air. And I’ll be damned if I ever let anyone hook my face up to an electric current that I have to ground myself. I don’t care if it does get rid of double chins.

This surprisingly compact bracelet contains, well, a compact. Not to mention rouge (for both face and lips), mirrors and little puffs to help you quickly and discreetly freshen up without heading to the powder room to do your powdering. When not in use, the compartments are covered by an outer metal band, so you don’t have to worry about accidentally rouging your dress.

You know how sometimes you’re filming a super-romantic scene with Cary Grant and you guys are both on fire and the entire crew is weeping from the emotional intensity and then the director yells “Cut!” and makes you redo the scene because there was a run in your stocking? Well, that’s the problem one Hollywood make-up artist set out to solve by painting nylons onto actresses with makeup that looked like real silk. For added verisimilitude, he would draw a seam down the backs of their legs. The makeup washed off easily with soap and water, but wouldn’t come off on clothes, the inventor claimed.

Clearly the precursor to the flavored Bonne Bell Lip Smackers that today grace the lips of preteen girls everywhere, flavorful lipsticks made these well-coiffed women smile. Is it just me, or is the one with “wine” flavor smiling the widest? And do I detect a hint of jealousy in the eyes of those who were stuck with plain old “orange” and “pineapple?” Other, not pictured flavors include banana, champagne, peach, apricot and rye. Seriously, though, if anyone knows where I can get a wine-flavored Lip Smacker (preferably pinot noir, but I’m not picky), hit me up.

While I’m sure there are many YouTube makeup tutorials out there to help you transform into a classic Hollywood starlet, it would be a lot more authentic to get your advice straight from the source. The director of make-up for Twentieth Century Fox Studios wrote up this helpful guide for women who wanted to look as glamorous in their home movies as Barbara Stanwyck in Baby Face. Here are some of the makeup artist’s tips:

Men should follow the same tips, the article says, except you boys can skip the rouge altogether.

This collapsible mirror within a lipstick tube is perfect for women like me, who are always running late and doing their makeup at the bus stop, or for 1940s femme fatales who like to leave their lip prints on the napkins of handsome gentlemen at restaurants, or for international spies who always need to be on the lookout for enemies behind them, even while primping.