What’s The Point Of A Quantum Computer?

It's not what you've been told 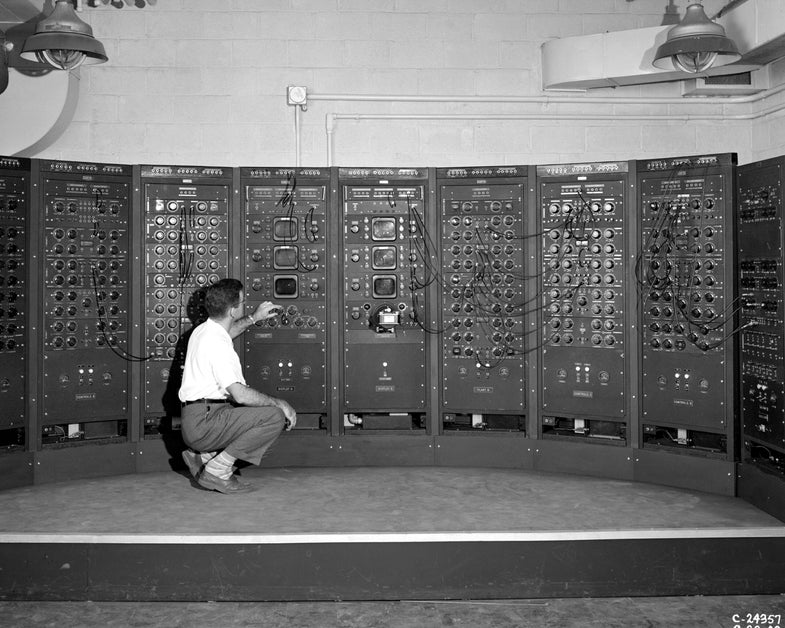 Back when our most celebrated technological achievements involved strapping people into a rocket and pointing it toward the moon, the engineers involved had enormous challenges to overcome. But, a modern computer scientist might grumble, at least they could explain the basic principles involved: Exploding fuel goes down, astronauts go up.

Today, with our prized gadgets sitting not on a Cape Canaveral launch pad but on our desks and in our pockets, the world of cutting edge technology has become at the same time more esoteric and more immediate. We all know why an iPhone 6 Plus is exciting, but most of us would be hard-pressed to explain exactly how it works.

This is especially true when we talk about the revolutionary and bizarre world of quantum computers. These devices are currently under development in the halls of universities and tech giants from Microsoft to Google. Every once in a while someone claims to have built one, but no one can absolutely prove it’s actually using quantum mechanisms. While a small community rabidly follows each new development, most of us on the outside would be hard pressed to explain what exactly the heck a quantum computer does.

While writing this article, I conducted a quick, informal poll of physics and engineering graduate students who were waiting in line for a bus. “What is a quantum computer,” I asked, “and what is it supposed to do?” There were three major responses:

“We’re going all the way back and testing quantum mechanics itself.”

The theoretical computer scientist Scott Aaronson tells Popular Science that journalists and researchers have told the public an incomplete story about quantum computing, verging on false.

“There’s this story that quantum computers are machines that can solve any problem instantly because they consider every answer at the same time,” he says. The notion comes from the quantum bits (qubits) that drive quantum calculations. Instead of reading either 0 or 1, like a bit in a regular computer, a qubit can have multiple “superpositions” in a calculation—holding a universe of possible values. One of those values, the story goes, is the correct answer. This may be technically true. But, Aaronson says, the point people miss is that the quantum computer has to resolve all those superpositions to spit out a single answer. Whether it will sort out the correct one in any given problem—and do so faster than a conventional machine—remains an open question. In other words, there’s no special reason why a qPhone should run any faster than an iPhone.

So what’s the point of building one at all?

The easy answer is that there are some special problems that quantum computers should solve much faster than their conventional cousins. The most famous example is prime factorization. A transistor chip can easily multiply a lot of prime numbers together into one big number, but takes a long time to pull that big number apart into its components. The machine has to test every possible combination of primes until stumbling across the correct one. This basic idea turns out to be very important for protecting everything from your Facebook password to the money in your bank account.

In 1994 the mathematician Peter Shor showed that the special nature of quantum computers would allow them to quickly sift the true factors making up even huge numbers from an ocean of incorrect answers. Roughly, all the possible answers to a prime factorization problem exist simultaneously in superposition on the qubit. And they have properties called amplitudes. Amplitude is related to probability, but distorted to include negative and imaginary numbers. Imagine it as a version of probability gone feral in the quantum world. Shor came up with a method that lays out the potential answers to a particular prime factorization problem so that the amplitudes of the incorrect answers cancel each other out. Run Shor’s algorithm on a quantum computer, and the wrong answers annihilate each other, leaving only the right answer (in this case, probably the key to cracking your Facebook password) standing.

Aaronson says that this idea, while true, also misses the point of quantum computers.

“It’s an easy story to tell people, but it’s not the right one,” he says. Quantum computing, in his mind, isn’t about pulling off online bank heists. It’s about proving something fundamental about the universe: that the strange, decades-old claims of quantum mechanics—ideas Einstein called “spooky” and spent years trying to negate—are more than theories.

“If quantum mechanics doesn’t make you queasy, you’re not think about it right,” Aaronson says. Quantum mechanics tells us that all our fundamental assumptions about the world are bogus. When a baseball strikes a bat, it will probably go flying into left field. But it could also transform into a tiny rampaging gorilla, or drop to the ground and belt the Canadian national anthem, or plop out of the visible world altogether. Underneath everything we see, particles are quivering with rabid randomness. We live in a weird amplitude soup, one that we’ve scarcely observed empirically.

If a full-scale quantum computer is built, Aaronson says, every quantum doubter—and there are doubters still, even among scientists—will have to eat his hat. It would be an achievement like the Large Hadron Collider, which scientists at CERN used to find the Higgs Boson and confirm many of the claims of the standard model of physics. In other words, Aaronson believes a quantum computer would be a machine whose greatest purpose would the in the service of pure science.

“There’s something retro about quantum computing,” he says, “We’re going all the way back and testing quantum mechanics itself.”