US copyright holders like the RIAA and MPAA have a new weapon to battle piracy. Read on to find out what it is, how it works, and whether you should be scared to snag a torrent of this week's episode of Justified.

There’s been a lot of discussion this week about the Copyright Alert System. It is a confusing thing! But if you like to steal things on the internet, or even if you don’t, you should be aware of it, because this is the way copyright protection is going to work nationwide for the foreseeable future.

The Copyright Alert System, or CAS, is a system developed by internet service providers (ISPs include Comcast, Verizon, and Time Warner) and copyright holders (largely the Motion Picture Association of America, the Recording Industry Association of America, and the National Cable and Telecommunications Association, the trade organizations that represent the movie, music, and television industries, respectively) to battle online piracy. The approach to battling copyright infringement before now has been piecemeal and vague–sometimes you’d get a letter telling you to stop, sometimes you’d get sued for billions of dollars, and, usually, absolutely nothing would happen–and the CAS is an effort to standardize a response to piracy.

Is The Government Involved?**

It’s not a governmental effort; these are private companies changing their policies, so they don’t actually need anyone’s approval. But the White House has voiced its support anyway:

We believe that this agreement is a positive step and consistent with our strategy of encouraging voluntary efforts to strengthen online intellectual property enforcement and with our broader Internet policy principles, emphasizing privacy, free speech, competition and due process.

It was hammered out in 2011, but you’re hearing about it lately because it’s just gone into effect this month.

The internet providers and copyright holders have begun using peer-to-peer (P2P) surveillance methods to try to sniff out when copyrighted content is uploaded or shared illegally. A company called MarkMonitor has been contracted to join BitTorrent networks (the most common way to illegally share files) and search for the names of copyright-protected movies, music, and TV shows. The list of those names is provided by the MPAA, RIAA, and NCTA. When MarkMonitor finds a file in violation, they snag the IP address of the user who’s sharing the file and send it off to that user’s internet provider, who issues a series of escalating warnings.

Wait, They’re Snooping? Is That Legal?

It doesn’t break any federal laws, and the US government has already issued a statement of support, but there’s a lot of concern about how this is done. MarkMonitor is owned by Thomson Reuters, a massive multinational corporation with major influence in the legal, financial, and media fields. There is supposed to be an “independent” auditor of MarkMonitor’s peer-to-peer snooping, but the Electronic Frontier Foundation, an internet-freedom activist group that has vocally disapproved of the Copyright Alert System, discovered that the auditor is…not independent.

The auditor is Stroz Friedberg, a consultancy and lobbying firm that lobbied on behalf of the RIAA in Congress for five years, up until 2009. And the specifics of how MarkMonitor will actually be conducting the peer-to-peer snooping have all been redacted from a report released by the Center for Copyright Information, the private group that’s sort of overseeing this whole system.

So, we have huge corporations paying other huge corporations to spy on our file-sharing networks, and possibly other things. But we don’t know which other things, or how they’re doing it, because that information has been redacted. And the company that’s making sure this is all above-board is the RIAA’s former lobbyist. 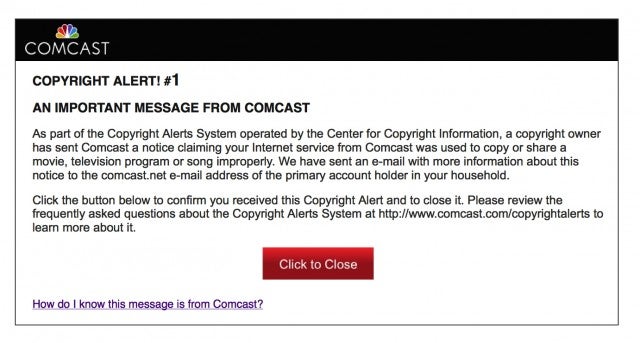 What Happens If I Get Caught Torrenting?

The CAS is commonly known as the “six strikes” system. Ars Technica got a look at one example of these, from Comcast (because the other internet providers declined to actually send examples). The CAS is supposed to be an “education” system rather than a punitive system, so the alerts are focused not on prosecuting but on information. They’ll be sent to your default email address–in the case of Comcast, that means your comcast.net address, which I think few Comcast users actually check. You’ll have to dismiss these alerts, until you get to about the fifth alert, which requires you to call the Comcast Security Assurance line and hear a speech about copyright violation.

At some point during these six alerts, probably around the fourth or fifth, your internet provider could begin taking action against you, though it won’t be as severe as a lawsuit or even a shutdown or your service. Instead they’ll likely begin “throttling” your connection, meaning your speeds will be drastically decreased, which is infuriating and will make it difficult to download all those 720p seasons of Breaking Bad.

The big fear of pirates, especially during the Napster era, was a massive lawsuit from the RIAA or MPAA–even if you won (and you might, because the laws are largely vague and inadequate to deal with the rapidly changing landscape of file-sharing), you’d have outrageous legal fees to deal with. And that era seems to be over; it’s highly unlikely that anyone will be sued now that the CAS is the default copyright-protection strategy.

That said, due to the lack of transparency here, nobody really knows what happens when you get to a sixth alert. The copyright holders have said they are not interested in prosecution, but there’s nothing legally stopping them from suing. But that’s all speculation, because we have no idea what’s at the end of this dark path.

What If I’ve Been Wrongly Accused?

Well, that sucks. You’ll have to pay a $35 fee to appeal your warnings, and nobody seems to have any idea how the companies will go about clearing your name. Internet providers are not exactly known for being paragons of customer service, and it’s anyone’s guess as to how hard they’ll work on a copyright infringement appeal.

Can I Get Around The CAS?

Probably! This is a tricky question to answer, because as we noted above, nobody knows exactly how MarkMonitor is going to be tracking down potential copyright violators. Not knowing their methods makes it difficult to know how to get around them. But a Comcast representative told Ars Technica that using a VPN, or virtual private network, will probably mask your activities from MarkMonitor–the exact quote is “I think you’re right,” so that’s assuming the rep even knows what a VPN is. (They’re private networks within the internet that have higher levels of encryption–anyone outside this “network” you’ve set up won’t be able to see what’s happening within it.) Most modern torrent clients, like µTorrent and Transmission, offer identity-masking features. This TorrentFreak guide on how to download torrents anonymously is a few years old, but the advice still works.