The Best Things We Saw At Facebook’s F8 Keynote Today 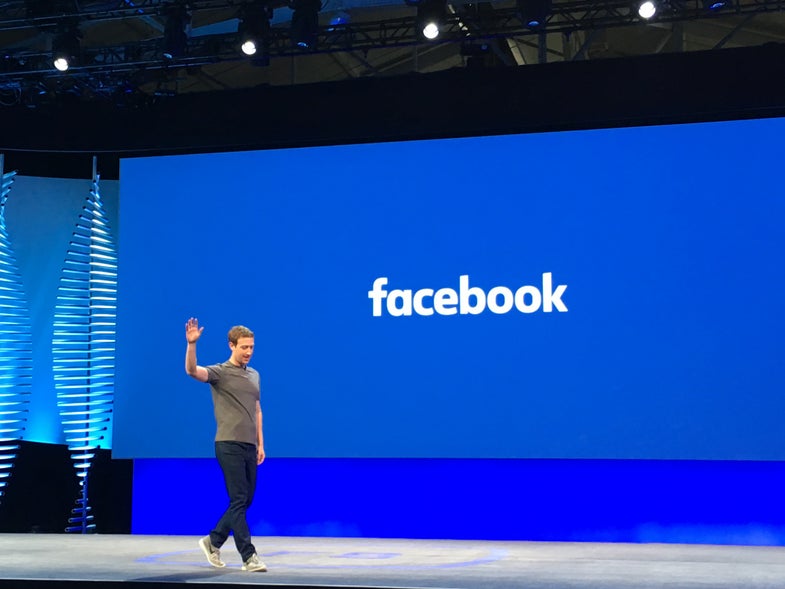 Facebook kicked off its yearly F8 conference for developers this morning in San Francisco with a cascade of announcements ranging from enhanced live video capabilities to an entire platform for bots on the Messenger chat app. Increasingly, Facebook is a multi-headed beast with an eye on nearly every technological challenge we face in the modern world.

The event started with a intro from Facebook founder and T-shirt enthusiast Mark Zuckerberg, who laid out the company’s roadmap for the next 10 years.

Zuckerberg talks about the future in three stages: 3 years away, 5 years away, and finally 10 years away. (Note that while all of these technologies are seemingly attainable based on current progress, “10 years in the future” tends to be the de facto repository for ideas that will actually take far longer.)

For the next 3 years, Facebook will be thinking about creating its ecosystem: that means more apps connecting to the platform, more features, and refining what Facebook actually is. Sure, the website already allows the sharing of information and experiences, but by adding e-commerce in Messenger and increasing investment in virtual reality, the company continues to try to find its voice in a sea of new technological opportunities.

The 5-year plan is to work on products. As the initial platform for Facebook stabilizes, we’ll see increased focus on other apps like Instagram and WhatsApp. Facebook will also double down on search, increasing artificial intelligence’s role in actually processing images and reading posts, to better recommend content for users. Groups are on the table as well, but didn’t get a lot of attention in the keynote.

Then we have the big projects, the technologies that Facebook wants to develop. These are things like virtual reality, artificial intelligence, and new methods of connecting people in remote regions to the internet. Most of these represent passion projects for Zuckerberg, who said during the keynote that he wants to capture his daughter’s first steps in immersive 360-degree video. (Her life achievements will doubtlessly be chronicled with Facebook’s new 360-degree camera.) At the beginning of the year, the Facebook founder posted that he would be undertaking a personal project to make an artificial intelligence bot to serve as a virtual butler, much like Tony Stark’s Jarvis. He’s been steadily calling Facebook employees to his home for help on the project, in what must be some of the most intimidating lunch invites in tech.

Global connectivity is the one of the only project that Zuckerberg hasn’t publicly attached a personal significance to, although his efforts with Facebook’s Connectivity Lab and Internet.org have clearly shown he wants this initiative to succeed. The technologies include Aquila, the drone that uses lasers to beam internet from the sky, and Free Basics, the controversial internet platform that provides internet access and web site creation tools for those in developing countries. We also got a sneak peek at two other pieces of technology relating to connectivity that will be announced tomorrow, called Terragraph and Project Aries.

So those are the broad strokes of the plan, but the biggest announcements were things that are happening today. Specifically, Facebook is making Messenger a platform for bots, and opening live video streaming to devices other than phones.

Users might be noticing an abundance of live video on Facebook lately—and that’s not going to change. Zuckerberg announced that a Live Video API will now be available to developers. This means that lots of cameras are going to start supporting direct streaming to Facebook. Until now, those who were able to livestream (at first it was limited to certain celebrities and news organizations) have only been able to use phones to take the video. Chris Cox, Facebook’s head of product, pulled up an image of a professional video rig fitted with an iPhone for livestreaming.

“This is not what the future is supposed to look like,” Cox said.

This is actually a really good thing; Facebook live video is about to get way better. With higher-quality cameras and the option for better audio, suddenly the platform is a real competitor to other livestreaming sites like Periscope, YouTube, and Twitch.

The first camera to have the full Facebook Live streaming capability is Mevo, a small cylindrical camera that shoots 4K, and can automatically crop the video to focus on specific people in the video. In theory, this gives the illusion of a multi-camera setup. The Mevo camera will cost $399, but only $299 if you pre-order.

Facebook has also partnered with DJI, and in a few weeks an update to the drone company’s Phantom line will add live video streaming to the drones. There hasn’t been any confirmation yet of which models would be supported or left out of the update.

The API is open to developers now, so in the coming months expect to see more and more cameras that are Facebook Live-ready.

Bots have become a mainstream addition to messaging platforms extremely quickly in the last few weeks. Microsoft announced its bot-based future, Kik added a bot store, and now Facebook has run full-bore into bot land, making its Messenger app a platform for businesses to use bots. The company is also giving a little taste of the artificial intelligence behind Facebook M, its experimental A.I. assistant. M learns as it speaks with more people. The system has been in a small beta test for nearly a year, but now the platform, which was developed by a company called Wit.ai that Facebook acquired last year, will be open to developers.

These announcements mean two things: you will be able to chat with bots that represent businesses to buy things or get information, and the bots are going to be able to parse text typed by humans.

During a video demo, Cox showed the process of buying new shoes on Messenger. The user just types in what they want and are presented with a few price options, in the form of a few buttons. Not every interaction has to be a typed response. By choosing a price bracket, the user is then given a little slideshow of potential products to scroll through, and can purchase with just a few taps (if credit card information is already saved). A receipt then appears in the chat window.

A big hurdle in bot creation is that users traditionally have to type in exact phrases to be sure the bots parse correctly. This is because the bots are just matching lines they’re given to an appropriate pre-programmed response. With the Wit.ai platform, the bots will devise their own text, and be able to actually read yours.

But not every bot needs to use the A.I. platform. Natural language processing like Wit.ai’s is tricky, and chances are most bots will start out pretty dumb. We also don’t know a lot about how the learning works. Without appropriate safeguards, bots could end up spewing racist, genocidal garbage like Microsoft’s failed Tay experiment.

A bunch of news organizations and online retailers have already made bots, like The Wall Street Journal, Business Insider, and e-commerce site Spring, and more are on the way. They’re all available now on Messenger, and are searchable by using the new persistent Search bar on top of the app.

These are just a few of the many announcements that Facebook made today. The company also debuted its own 360-degree camera, which will be useful to niche camera builders, and it updated ways to share quotes on Facebook. It’s also shown off a Save button, where content can be stored locally on a phone to read or watch later, taking on apps like Pocket.

F8 will continue on April 12 and 13, diving into more detail about the announcements already made, and with more new initiatives to come.