Facebook’s A.I. Will Analyze Your Posts To Help You Post Better

"Hi! It looks like you're trying to sell a washing machine." 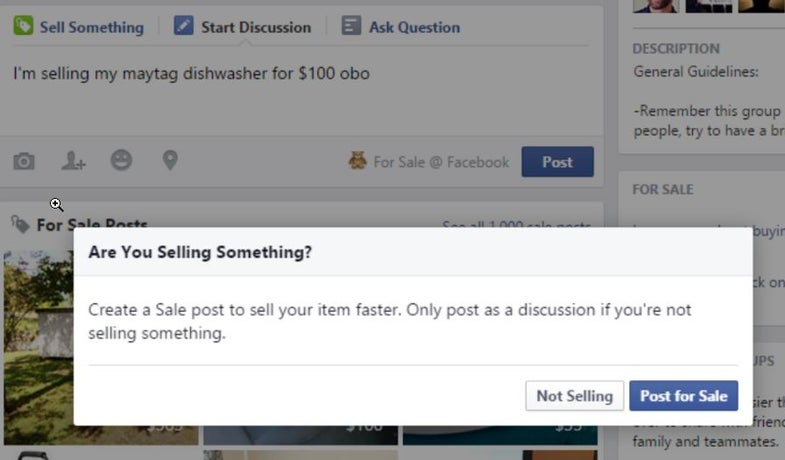 Facebook catalogues our life’s achievements, friendships, worries, hopes, and for some, the old washing machine that we’re trying to sell. To sort through what all this actually means, Facebook has started to use an artificial intelligence language model to read through posts, and then recommend actions and services.

In the vogue of the time, Facebook’s language engine will be named DeepText, as it relies on deep learning. Fundamentally, the model deconstructs sentences to find their meaning. In Facebook’s initial use case, the algorithm is able to tell if you’re using Facebook to sell something. If it reads the post and determines it’s a sale offer, a dialogue box will pop up before the post goes live, asking if you want to list it as a Sale post. DeepText can understand more than 20 languages, and is able to work at Facebook’s scale, parsing thousands of posts per second.

In a blog post detailing the engine, the authors explore some other uses for the technology, like knowing when you want to hail a ride in the Messenger app, surfacing the best comments on a post, or filtering spam.

But what this announcement means is that Facebook can now act on every single word on the site. It can understand what users mean when they post and then serve those users ads with extreme precision. Facebook had been previously searchable, but understanding what those words mean makes them seriously useful. This is also already been shown to work within Messenger, which means any chat is about to get smarter, regardless whether there’s a bot in the channel.

The model itself is trained on immense amounts of language. It groups together words that it finds to be similar. In their blog post, researchers say that the words “brother” and “bro” are pretty closely correlated. This happens regardless of language; the engine still sees the content as semantically similar.

Once the engine has this graph of language, it’s able to use the relationships between words to construct a complex idea of how they relate, and engineers can instruct Facebook to act on those ideas.

This announcement comes on the heels of Google’s open-source language parser “Parsey McParseface,” although Facebook will not release its code to the public.