Does drinking hot liquids on a hot day actually cool you off?

Yes, technically, but not nearly enough. 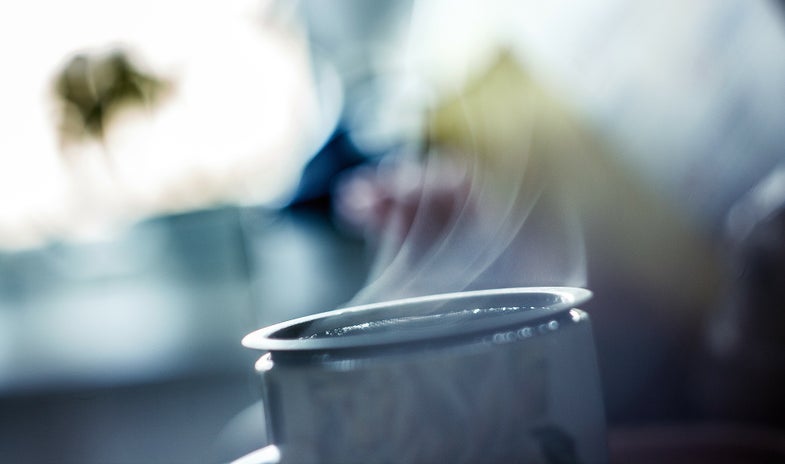 Every summer, reporters from around the world call Ollie Jay to ask one question: Does consuming hot liquids in the summer really cool you off?

“I think the old wives’ tale of drinking a hot drink on a hot day really resonates,” Jay says. He now heads the Thermal Ergonomics Laboratory at the University of Sydney. But back in 2012, while at the University of Ottawa’s School of Human Kinetics, he published a paper which found that hot drinks can cool you down, at least to a certain degree.

Jay and his team had nine men cycle for 75 minutes with a fan blowing at them, evaporating any sweat. The volunteers drank water ranging in temperature from an icy cold 35°F to a hot 122°F. The researchers found that when the men cycled and drank hot water, they lost 56 kilojoules more of energy in the form of heat compared to when they drank room temperature water. But when the volunteers drank the chilly liquid, they actually gained 21 kilojoules compared to the same situation.

“It’s kind of this paradoxical idea,” says Jay. “A cold fluid feels cooler when it goes inside of you, but it doesn’t really make you cooler because you reduce your sweating.”

The key to this energy exchange is good ol’ sweat. For every gram of perspiration which evaporates from your skin, you lose approximately 2.43 kilojoules of energy. The men who drank hot water gained 52 extra kilojoules of heat from the water. But when the sweat started pouring off their bodies, the men also lost 108 kilojoules of heat from sweat evaporation. When it came to chilly drinks, the opposite happened. The men produced much less sweat, and therefore experienced less evaporation. While the cold water cooled them down by 138 kilojoules, that wasn’t enough to counteract the 159 kilojoules retained from decreased evaporation on their skin. When the cyclists drank room temperature water, the amount of heat they gained versus the amount they lost stayed the same.

Okay, so drinking hotter drinks makes you sweat more and lose more heat, whereas colder drinks cool you down, but not quite enough. So should everyone start downing hot tea in the middle of a scorching August afternoon? Probably not.

“I never really advocate people drinking hot fluids on a hot day,” Jay emphasizes. For one, he says, the heat lost from evaporation isn’t actually all that substantial. For another, the experiment also took place in front of a fan. That ensured that every drop of sweat the cyclist produced was evaporated and contributed to the overall heat lost. If the sweat drips off your face or you wipe it off with a towel, that means that bead of sweat didn’t evaporate from your skin and you didn’t experience the benefits of the heat loss through sweat evaporation.

But, what was the connection between the water’s temperature and the mens’ sweat levels? The experiment didn’t change the volunteers’ internal body temperatures. So how could the body have known whether to turn down or up the sweat production?

Jay hypothesized that it must have happened somewhere along the water’s path. There were nerve endings in either the mens’ stomachs or mouths called thermoreceptors which could sense temperatures and exerted much of the control over sweat rates. So in 2014, he ran a new experiment. Volunteers either rinsed their mouths out with water of varying temperatures, or directly injected the water into their stomachs through a nasogastric tube in order to completely bypass the mouth.

But these receptors in the stomach are hardly the only temperature receptors in your body. As you may know, after an intense workout, many people put ice packs on the back of their necks to cool down. “That feels really good, right?” says Jay. “But that’s not cooling your brain down.”

Blood might be rushing by just underneath the skin, but there’s not a lot of heat being exchanged between the ice and your blood. Instead the nerve endings there act as temperature receptors, just like in the stomach, and make you feel cooler even if you aren’t.

You might have experienced something similar at night if you woke up feeling too warm. Your feet have nerves with a similar function. “In bed, one of the first things you’ll try to do to feel cool is to pop your feet out from under the bottom of the sheet,” says Jay. “The amount of extra cooling you get is obviously not going to be that much, but it has a disproportional influence on how cool or how hot you feel.”

So now you know that you can thank the temperature receptors in your stomach for the relief you feel after a giant slushie and for the sweat you create when you gingerly sip a steaming cup of coffee. But if you are looking for the best way to cool down on a hot summer day, you should probably just head indoors or at least out of direct sunlight.

Ask Us Anything
ask anything
drinks
food
heat
hot