From modeling to printing, it's all about seeing inside someone's head 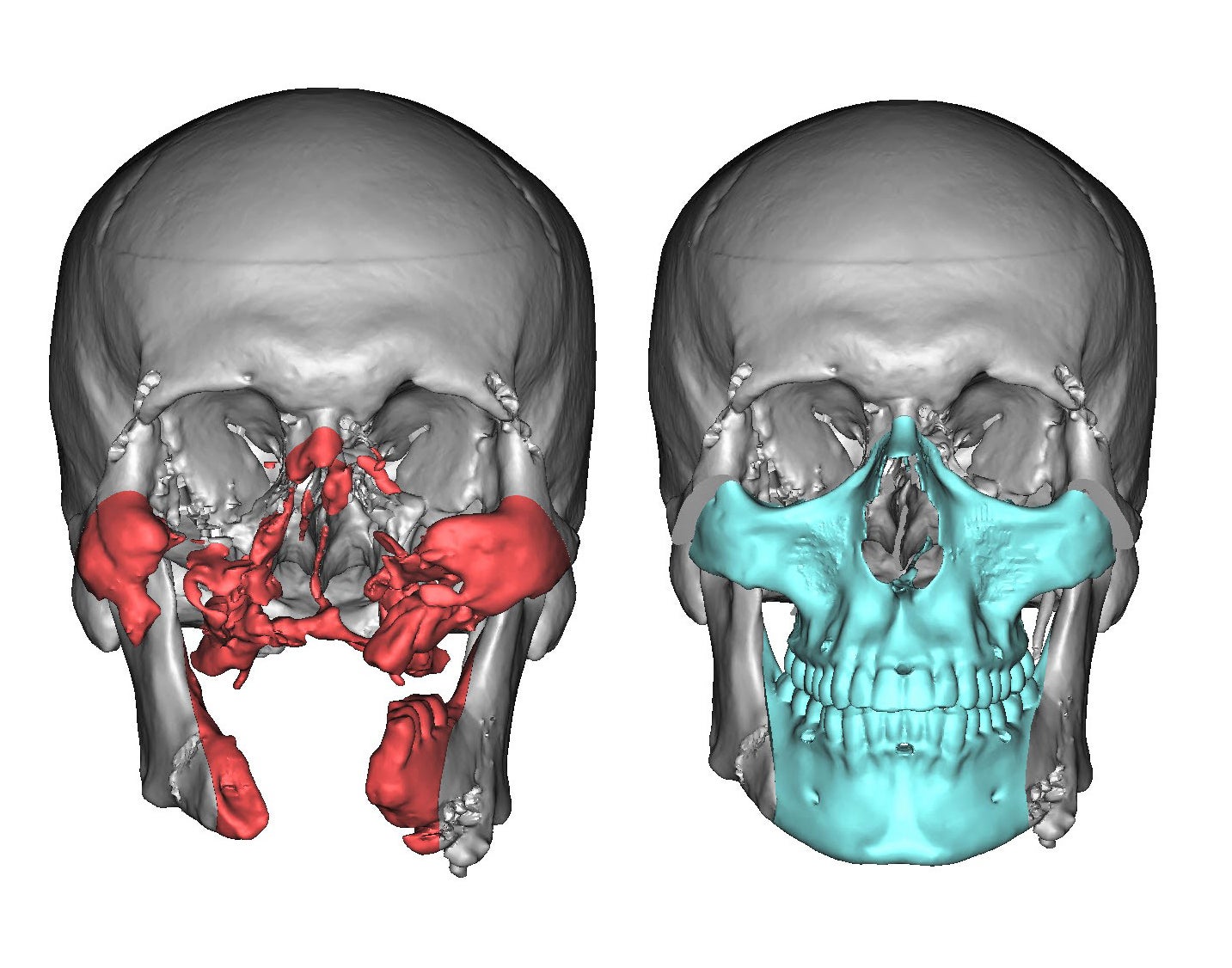 Cameron Underwood received a new face on January 6, 2018. By the time his surgery ended, everything below Underwood’s eye sockets had been replaced with the face of organ donor William Fisher.

A face transplant is exactly what it sounds like—replacing the disfigured face of one person with the whole, undamaged face of a very recently deceased person. Eduardo Rodriguez, plastic surgeon and face transplant specialist at NYU Langone Medical Center in New York who performed surgery on Underwood, insists this surgery is a way to give these patients “a second chance at life.” Without a new face, patients like Underwood have great difficulty speaking, swallowing, eating, expressing themselves, as well as all the other things we do with our faces that we never think twice about.

A physician in France performed the first successful face transplant surgery in 2005. Since then, only 40 other such surgeries have been done around the world. Rodriguez has performed three of those surgeries, including Underwood’s.

Face transplants are an ideal setting to fuse medicine with the growing world of 3D printing and imaging. During Cameron Underwood’s surgery, everything from planning, printing the tools, and accurately aligning the face during the operation relies on the latest medical technology.

Building a digital model of a face

After suffering a self-inflicted gunshot wound, Underwood’s upper and lower jaw bones, gums, and all 32 teeth had to be replaced, as well as the roof and floor of his mouth, part of his tongue, the lower eyelids, cheeks, nose, and parts of the nasal passage. He had metal plates screwed into his remaining facial bones, the handiwork of surgeons attempting to patch him up immediately after the incident. His speech was difficult and muffled. He relied on a feeding tube to eat and a hole in his neck to breathe. Most of the time, he wore a surgical face mask to avoid surprised stares.

Prior to any surgeries, Rodriguez and his team took a CT scan of Underwood’s face. CT scans, also known as CAT scans, shoot x-rays from different angles to build a picture of the bones, tissues, and cavities in any area of the body, in this case the head. The scanner can display the inside of the head as 2D “slices” of each area. By flipping through the slices, you can get a sense of what’s happening with the underlying architecture of the face.

But for a surgery as detailed as this one, a single CT scan isn’t enough. Precision—particularly in facial alignment—is key during a face transplant surgery. So they sent the CT scans to a company in Michigan called Materialise. This company specializes in building 3D-printing software and applications, and has developed an entire practice around medical tools. The engineers at Materialise took the slices from the CT scan and converted them into a digital, three dimensional model of Cameron Underwood’s face that Rodriguez could use to meticulously plan every element of the surgery.

Part of the normal 3D printing process involves taking a 3-dimensional digital model and converting it into slice files that the printer can then read and use to build the physical representation layer by layer, says Bryan Crutchfield, vice president and general manager for Materialise North America. Materialise realized they could reverse that process, using similar software to convert slice files, like those from a CT scanner, into 3-dimensional renderings.

3D printing the tools to replace a face

After building the digital 3D model, Rodriguez could use it to determine how exactly he wanted to remove most of Underwood’s face and attach someone else’s. To assist with planning and the eventual surgery, Materialise printed a physical anatomical model of the face with an SLA printer that zaps a liquid resin with a UV laser over and over again to build the precise anatomical model, says Crutchfield.

They also printed cutting guides that Rodriguez would mount on Underwood’s face during surgery to ensure he cut in exactly the spot he planned. The cutting guides needed to be much stronger than the model, so Materialise engineers used an SLS 3D printer, one that uses stronger material than standard 3D printers by employing “essentially a white almost talcum powder [consistency] spread in a heated chamber,” says Crutchfield. An infrared laser melts the powder, layer by layer, gradually building up the part, he says.

Doing it all again—in just 24 hours

The biggest unknown in pretty much any transplant surgery is the availability of a donor organ. When a possible donor is identified, physicians have mere hours to determine if the organ is a true match for their patient and then move into surgery. If they wait too long, they won’t be able to keep the organ alive and the transplant will fail.

To prepare for this final sprint, Rodriguez and his team at NYU Langone as well as his partners at Materialise staged seven practice surgeries using cadavers. Each practice was treated like the real thing, which meant scanning the “donor” cadaver, sending his information to Materialise, which would rapidly build the 3D digital model, consult with Rodriguez to build and tweak the surgical plan, then print the cutting guides as quickly as possible and ship them overnight from Michigan to New York City.

LiveOnNY, an organ procurement organization for the greater New York City area, identified possible organ donor Will Fisher in early January 2018. Rodriguez and the Materialise team sprung into action, moving Fisher to NYU Langone where they scanned his face and sent the images to Materialise. Rodriguez and Sukhinder Bilkhu, who manages the clinical team for Materialise in North America, used the quickly constructed digital 3D model of Fisher’s face to plan his half of the surgery. Then, Materialise started printing the model and cutting guides.

As luck would have it, as Rodriguez was examining Fisher and preparing for surgery, the ‘Bomb Cyclone’ hit New York City. Underwood barely made it to New York from his home in California. Two dedicated engineers from Materialise got in a car and drove the freshly printed cutting guides from Michigan to New York City. The entire process—from receiving the data to delivering the guides—took a mere 24 hours, says Bilkhu.

Getting down to business

On January 5, 2018, Rodriguez started the face transplant surgery. In the surgical suite, the surgeon used yet more cutting-edge imagery to ensure every cut and stitch happened in the exact, predetermined spot. Rodriguez pinned a device to Underwood’s skull that can project an image of the inside of his head to monitors in the operating room. He likens the system to the GPS in a car, only instead, he’s navigating inside someone’s head. Rodriguez can use a thin, pencil-like wand to touch a portion of the skull and the image of that point will appear on the monitor. This allowed him to confirm that every piece is in exactly the right place.

After the final stitch, Rodriguez wheeled Underwood directly into a CT scanner in the operating room to confirm facial alignment. Until the advent of the surgical scanner, the patient either had to stay under anesthesia longer to go to a CT scanner somewhere else in the hospital to check alignment, or wake up after surgery, get scanned, and potentially go back under if something was amiss.

Meanwhile, technicians at NYU Langone sent the donor William Fisher’s 3D model to nearby LaGuardia Studios a digital media services center that specializes in 3D scanning and printing. The LaGuardia artists printed a realistic, synthetic replica of Fisher’s face. The mask was placed on Fisher’s body before they returned his body to his family.

Because of meticulous pre-planning, the surgery took Rodriguez just over a day to complete. He finished up one of the most technologically advanced face transplants in the early hours of January 6, 2018, 25 hours after surgery began. The technology available for these kinds of surgeries has improved rapidly even in just the last few years, says Rodriguez. With better 3D printing, imaging, and other tools, doctors can work even faster and with even higher levels of precision, to give people in need even better faces. Still, the resources needed, like specially-trained doctors and registered donors, is still not very widespread. Perhaps as the technology advances, this type of treatment will become more accessible to those who need it.

“I’d like to say that there have been so many amazing advances in surgery, I’m living proof of that,” Cameron Underwood said at a press conference last month when he revealed his new face to the world. “But it only happens because of special people like Will and his family. Thank you.”