Converting docs into virtual assistants isn't quite the singularity, yet 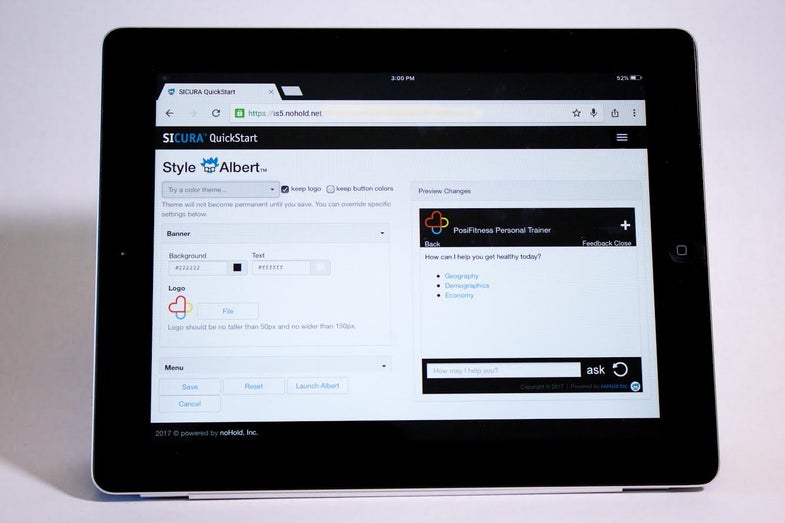 The future of bots is sitting in thousands of documents folders, waiting to be born. At least, that’s the premise of Albert, a bot and bot-creation tool from NoHold, which released a pro version on Monday. The premise behind Albert is straightforward: upload a document, and then ask the Albert-generated bot to answer questions with information based on that document. Albert is a product of the modern era of chatbots, but Albert’s origins are, by tech standards, positively ancient: the key work dates back to a patent filed in 1999.

“Do you know what a bucaneve is?” asks Diego Ventura, the CEO and Founder of NoHold. I admit that I do not. “It’s a flower that magically comes out of the snow. This is what I call our strategy,” Ventura explains. Albert is based on a patent from the last century, and rather than create a tool that makes chatbot then, in the early dotcom boom, Ventura says his company worked instead on a version of the technology used internally by a few big companies, like Dell and Cisco, and that the bot he’s showing me was waiting for the right moment.

Chatbots are having a moment, right now. Last year, Microsoft’s Tay AI debuted to great fanfare, and then promptly proceeded to flirt with technology writers and spew racism all within 24 hours, before Microsoft shut it down. Despite that high-profile failure, Microsoft is bullish on chatbots. National Geographic Kids UK made a T-Rex chatbot that could answer questions about dinosaurs. Last fall, people built a chatbot to talk to Comcast on behalf of customers, without getting the customer locked into a new contract. Asking machines questions, and having them find the answers, seems like a pretty promising use of the internet, one that meshes with how people understand language a little better than digging through search engines or flipping through manuals.

Albert, which hopes to have its bucaneve moment, ingests documents and spits out a bot that can navigate users through them. Ventura demonstrates this multiple times throughout our call, as Albert works with a manual made for Albert, a manual from Cisco, and a little fact-sheet on Italy that Ventura put together.

“Wouldn’t it be great if as a byproduct of writing a manual you could also get a virtual assistant,” says Ventura, and manuals make an ideal point to start. With clear headers and subheaders, once it’s ingested the document, Albert can look through the text for answers and then ask a clarifying question, to make sure the reader is pointed at the right place.

That’s the heart of Ventura’s patent, originally framed as a technical support tool. The language of the patent hints at a problem that Ventura will bring up many times in his technical demonstration: how do you get expert information to people without the stated expertise?

Albert, once it ingests the manual or the document, becomes the expert, and then responds to the user asking questions by fielding it more, clarifying questions, to see if it can direct the user to a known answer, found in the text.

Alone, Albert would be a novel alternative to a frequently asked questions page, a way for small business to offer a first rung of interactive support online. With just a couple minutes delay, Albert lets the bot-owner know what questions people were asking, which in turn can lead to a better phrasing of answers in the source document. Alone, Albert can create islands of useful, one-purpose bots.

Alone isn’t really Ventura’s vision, though. To demonstrate, he pulled up the bot used by Cincinatti Bell. That bot is a reskinned Albert named “Bella,” and he asked it a couple of questions about a kind of Dell phone. Because the problem seemed to be on the product side and not the service side, Bella asked Ventura if he wanted to talk to Dell about the phone instead, and then connected to the Dell iteration of Albert.

Both Bella and the Dell iteration of Albert are running on NoHold’s system, which does the hosting for the bots. They are each siloed, automated experts: one for a phone company, one for a hardware manufacturer. And because they are connected on the back-end, talking to one can give a customer access to the knowledge of the other.

Hence the same bot that can turn an IT manual, or a pamphlet on Italy, or an FAQ page, or a fishing hook blog, into the same kind of parseable tool. It’s these pieces, built by small businesses and academics and bloggers, as well as bigger companies, that Ventura sees fueling a new AI of the future.

“The whole idea is that people would start building their own virtual assistants and then start connecting them together to make this grander AI that can answer a lot of questions. “