Apple’s New iPad: The Screen Is Better, and It’s Faster

Apple just announced the newest iPad, which will be called the iPad, and not the iPad 3 or iPad HD... 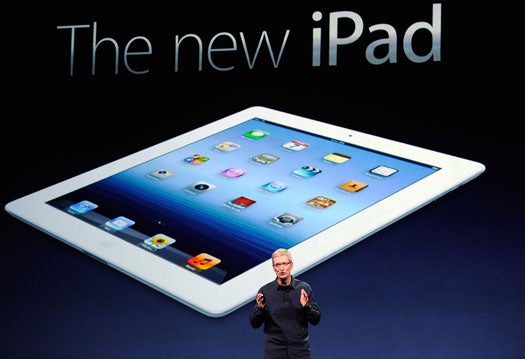 Apple just announced the newest iPad, which will be called the iPad, and not the iPad 3 or iPad HD or iPad: Eddie Bauer Edition or with any other modifier. The big hits: it’s got a better screen (“better” in this case meaning Apple has stolen all the pixels in the world and crammed them into the new iPad), a faster processor, an optional 4G LTE chip, and some software updates.

So the big news here is the screen resolution, which is bonkers. At 2048 x 1536 pixels, it has significantly more pixels than not just the old iPad, but also your 1080p HDTV and just about any other “HD” screen you’ve got lying around. Apple’s again referring to it as a “Retina Display,” which means that you won’t be able to see pixels with your bare, weakened, organic eyeballs, at least from the 15-inch distance Apple estimates most people have between their eyes and their iPads. (Note: Apple is clearly excluding cats, which have more sensitive eyes and sit closer to the iPad anyway. This is offensive, probably.) That’ll mean every publisher is going to have to re-do their apps for the new resolution, the same way they had to for the transition from the iPhone 3GS to the iPhone 4.

Also included: a new processor, dubbed the A5X, that provides quad-core power. The Tegra 3, which powers a few Android tablets, is also quad-core, but Apple needs the power to burn through the kinds of apps that will take advantage of the new display. Plus there’s a 4G LTE antenna, either for AT&T or Verizon, which is pretty great–we’re totally impressed by LTE, so it’s great to see it here. And Apple has presumably worked some kind of gypsy magic to keep the battery life steady at 10 hours for Wi-Fi and nine hours for 4G–we’ve seen LTE absolutely slaughter battery life in phones, but hopefully Apple’s worked that out.

Oh, and the company also announced a new Apple TV! Seems like basically just a firmware upgrade, though it’s not clear if older Apple TVs will get it. There’s a new version of the software, some nice bonuses like being able to use iCloud for 1080p movie streaming, and shows available the next day for purchase. No Siri, though, which bums us out because we spent all morning dreaming about how sweet that’d be.

The iPad and Apple TV both maintain pricing: iPad starts at $500, moving up from there due to storage and 4G inclusion, and the Apple TV costs $100.