A Battery-Powered Saw Rips Through A Car Door [Tested] 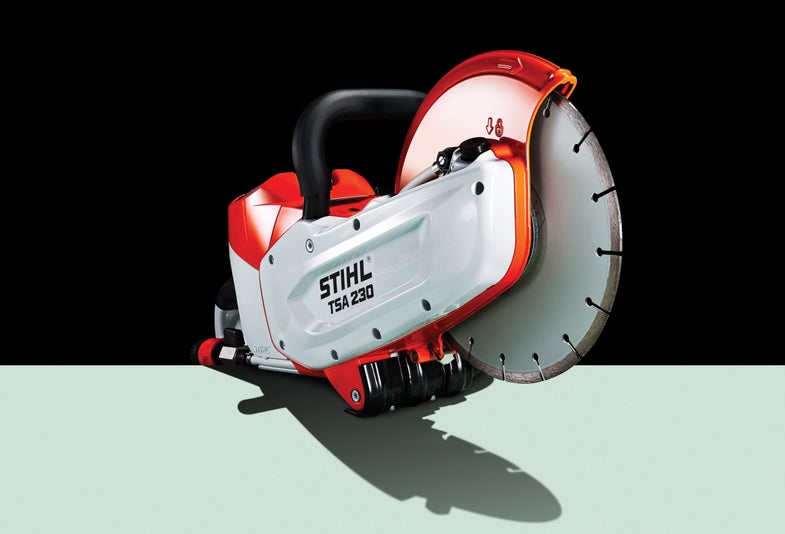 Ask any stonecutter or fireman about the most important tool in their arsenal, and they’ll likely tell you it’s the cut-off saw. Designed to slice through steel and stone, cut-offs are the workhorse of many job sites—and they have an engine to match, gas-powered and heavy.

The TSA 230 Stihl Cutquik is the first battery-powered cut-off to hit the market. Without a combustion engine, it’s nearly one-third the weight of its gas-powered counter­part (down to 8.5 lbs from 25 lbs), a huge upside for emergency responders. It’s also emission-free, so operators can use it indoors.

There’s no question about the TSA 230’s power, either. Its 36-volt battery spins the blade at 6,650 rpm while a built-in water line keeps the wheel cool and controls dust. Stihl’s gas-powered cut-offs operate at about 5,000 rpm, so it’s clear the TSA 230 has plenty of torque. The real question here is whether its battery will hold up over time. So we decided to put it to the test.

We wanted to measure the TSA 230’s battery in the most strenuous situations. First, we carved 1¾-inch concrete pavers, a standard for patio projects. Next, we cleaved off sections of 3/16-inch angle steel (used to stabilize walls). Then, we halved 1¼-inch steel padlocks—the ones most commonly cut by fire departments. Finally, we decided to up the ante and cut a car door in half. To determine performance, we counted the number of cuts it took before a fully charged battery drained.

Lock: 8.5 locks total. We sliced through the 3/8-inch-thick shackle and the 11/4-inch-thick body of each lock using an abrasive wheel.

Conclusion: The TSA 230 isn’t great for daylong projects far from an outlet, but for quick cuts, the combination of power, weight, and size doesn’t get any better. It’s a great addition to any tool shed.

Maximum depth, in millimeters, of the TSA 230’s cut