PopSci teaches you how to make a crossbow, a wooden scooter, a psychedelic light show, and more contraptions you didn't know you needed 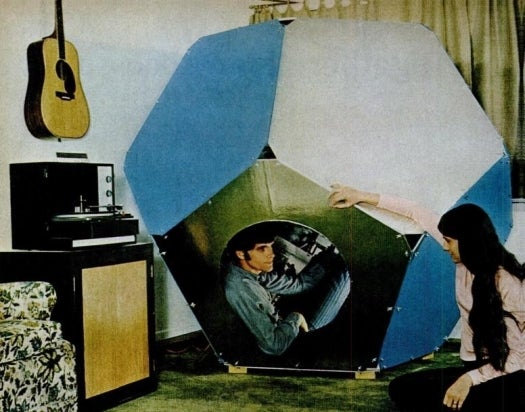 DIY projects have been a hallmark of Popular Science since we started printing articles with pictures. These contraptions ranged from homemade neutrodyne radio sets, to tractors, to borderline illegal breweries, but many of our favorites were featured between the 1940s and 1970s. By that time, our projects had taken on an “everyman” appeal; you didn’t need to be an expert or a crazy inventor to assemble them, but they would take resourcefulness, dedication, and hours of sawing.

Admittedly, most of our archive’s DIY projects are wildly eccentric, even impractical, but the point is that they’re fun to make. Who else but a tinkerer would build a crossbow in the year 1940? Who else would pave their own badminton court when they could hire the labor? Who else would think to build a scooter out of wood?

The beauty of DIY features is that they introduce readers to unlikely projects. In addition to the ones mentioned above, we provided articles on turning your station wagon into a camper and building a DC-to-AC “wall plug in the wilderness” inverter for people who enjoy watching TV in the great outdoors. We also couldn’t resist two the psychedelic light show DIY and the dodecahedral Meditator, pictured above, two not-so-subtle products of their time.

Headed to a medieval fair? Don’t forget to bring a crossbow, which can be made at home with a mere five dollars’ worth of scrap material. For the bow, collect a light auto spring from your local junkyard and hack-saw it accordingly. Use an ivory release nut and a stock cut from 2″ by 8″ by 27″ inch walnut. You’ll also need hinged wooden jack to draw the bowstring and bolts made of birth or fir dowels. And what’s a crossbow without feathers? Gather a bunch of stiff turkey or goose feathers and glue them onto wooden shafts. Use high-grade linen for the bowstring. Cutting and sawing all of the individuals pieces could be a little complicated, so we provided several diagrams to guide our readers through the process.

If you’ve been neglecting your backyard, consider turning it into a badminton court. Don’t hire a firm when you can pave it yourself. First, decide what kind of pavement you want. Dirt courts are the least expensive, but if you have money to spare, try a bituminous emulsion court, which has a tar-like consistency. Asphalt-concrete pavements are firmer, but require expert labor since the material is laid on hot. Finally, you can also consider concrete, which is popular in Southern California homes that come with badminton courts, but make sure you but it pre-mixed. After paving your court, wait a month until the concrete sets before painting the border lines. From there, install the light standards, the net, and the shrubbery.

Six months after the Pearl Harbor bombing, we provided an easy guide to making your own affordable airplane detector. Although this instrument wasn’t as sophisticated as the ones used by army searchlight crews, it was sensitive enough to detect a conversation occurring three blocks away. Civilians using this device could reasonably locate planes in a five to ten mile radius. The microscope installation pictured at left used a rock-wool plug, a shielded microphone cable, a water-tight metal shield, and a static microphone cartridge, among other materials. The “ear” could be taken from the horn of a phonograph, but you could also make it from a sheet of metal. The stand was made from scrap lumber, and the entire device was battery-powered. Simply plug earphones into the jack to begin listening.

Consider this wooden contraption a kid’s homemade introduction to motorbikes. This scooter, named Pioneer, weighed just 120 pounds but could carry twice its weight. It could drive at half a mile a minute on flat ground, could climb hills, and was road-tested for 300 miles. J.M. Harris, who provided the plan pictured left, made his out of oak and everyday hardware. First, saw your pieces from the oak. After assembling the frame, construct the seat parts out of foam rubber, plywood and stitched canvas. Strap on the fuel tank, attach maple dowels for the handlebars, and decide on whether you want a chain or belt connection to the rear wheel. Once you’re done, don’t forget to hook up the headlights battery.

Unable to part with your electric razor? Incapable of building a fire? Try making this portable DC-to-AC inverter instead. Hook it up with a 12-volt battery and leave the rest to your dual-transistor circuit. The inverter could power TV sets, kitchen appliances, power tools, hi-fi gear, and any other device that could run on less than 120 watts of AC.

Yard tractors cost thousands of dollars nowadays, but back in the 1960s, you could assemble your own from a kit costing just $350. It came with machined parts, tracks, pulleys, bolts, shafts, a welded-steel body, and a six-hp.,, four-cycle engine. All you’d need to build it were your screwdrivers, pliers and wrenches, although DIY enthusiasts could also opt for a low-cost model with a plywood body and hardwood strips for tracks.

Driving the tractor was simple. Plush the control level to move forward. Pull it back to brake. To reverse, push the pedal with your left foot and push both levers forward. To turn sharply, brake the inside lever while pushing the outside one forward.

This project could be a little dangerous, but if you were experienced with DIY, it could mean you’d look like a total boss zipping around on this aquaglider during summers by the lake. The glider could fly at an altitude of 200 feet while towed by a ski boat moving at 35 miles per hour. At 180 pounds, the glider was quite portable and could be disassembled in two parts for easy storage.

Building it used the same techniques as assembling a model airplane. Cut the pieces from full-scale drawings on brown wrapping paper, then glue them together and bolt the tail boom to the hull. Connect the control cables to the terminal fittings using standard turnbuckles and clevis fittings, and you’re good to go. We also suggested lightplane flying lessons at the local airport for novices.

Everyone gets bored at home, so when all else fails, preoccupy yourself with a homemade psychedelic screen show. “A hallucinatory turn-on? Modern art form? Home entertainment? Whichever way you see it, psychedelic light shows with their dazzling color-in-motion displays are making the scene,” we said. “Discotheque and rock-band tested, they are adaptable as fascinating sources of home entertainment.”

Making them was just a matter of buying the right equipment. You could produce these lights using a kaleidoscope projector, with a psychedelic slide and polarizing wheel, or with a strobe and color wheel display. (“High-intensity repetitive flashes give the eerie stop-motion effect, adding even more far-out character to a show.”)

Simply shine a high-intensity white light (such as a slide projector) through these elements to enjoy the show. We also suggested using music and sound synchronized with the lights to add either a danceable or ethereal effect. If you were really enthusiastic about DIY projects, you could also consider making a “wet show” by dropping color dyes into a clear-glass bowl of water on the overhead projector.

J.R. Fund, a self-proclaimed suburbanite, didn’t own a trailer but wanted to avoid paying for motels during family road trips. When he proposed building a station wagon camper, we asked him to prove its feasibility.

As it turns out, Fund’s camper (while smaller than most trailers) turned out to be a practical project. As the diagram on the left shows, it could hold two to three travelers along with a cabinet for food. You couldn’t cook inside it, but you could set up the requisite equipment at any campsite.

Construction called for an array of simple materials: plywood, aluminum, piping, a plastic water tank and a sink that could be purchased at a supply store.

Everybody needs some time alone. Monks have their abbeys, Henry David Thoreau had Walden Pond, and Popular Science Design Consultant Ken Isaacs had his dodecahedral Meditator, modeled after the Pythagorean concept of universe’s atomic building blocks. Cut the plywood panels using the layout provided in our magazine, sand the pieces and apply enamel, and finally, assemble them into the geometric structure. Glue graphics inside the Meditator to create a “pholage,” or a “photo collage.”

“It’s difficult to predict, but you may find the sensation akin to that mystical communion with nature that you experience when alone in a forest — or the sense of peace you feel in an empty cathedral,” Isaacs said when describing how it would feel to sit inside the Meditator. “or you may develop sudden insights as you study the picture-fragments of your world–and be swept by the conviction that you’re ‘getting it all together’ at last.”

archive gallery
archives
DIY
future then
The Future Then