It's a tricky challenge to convert collected data into useful information. 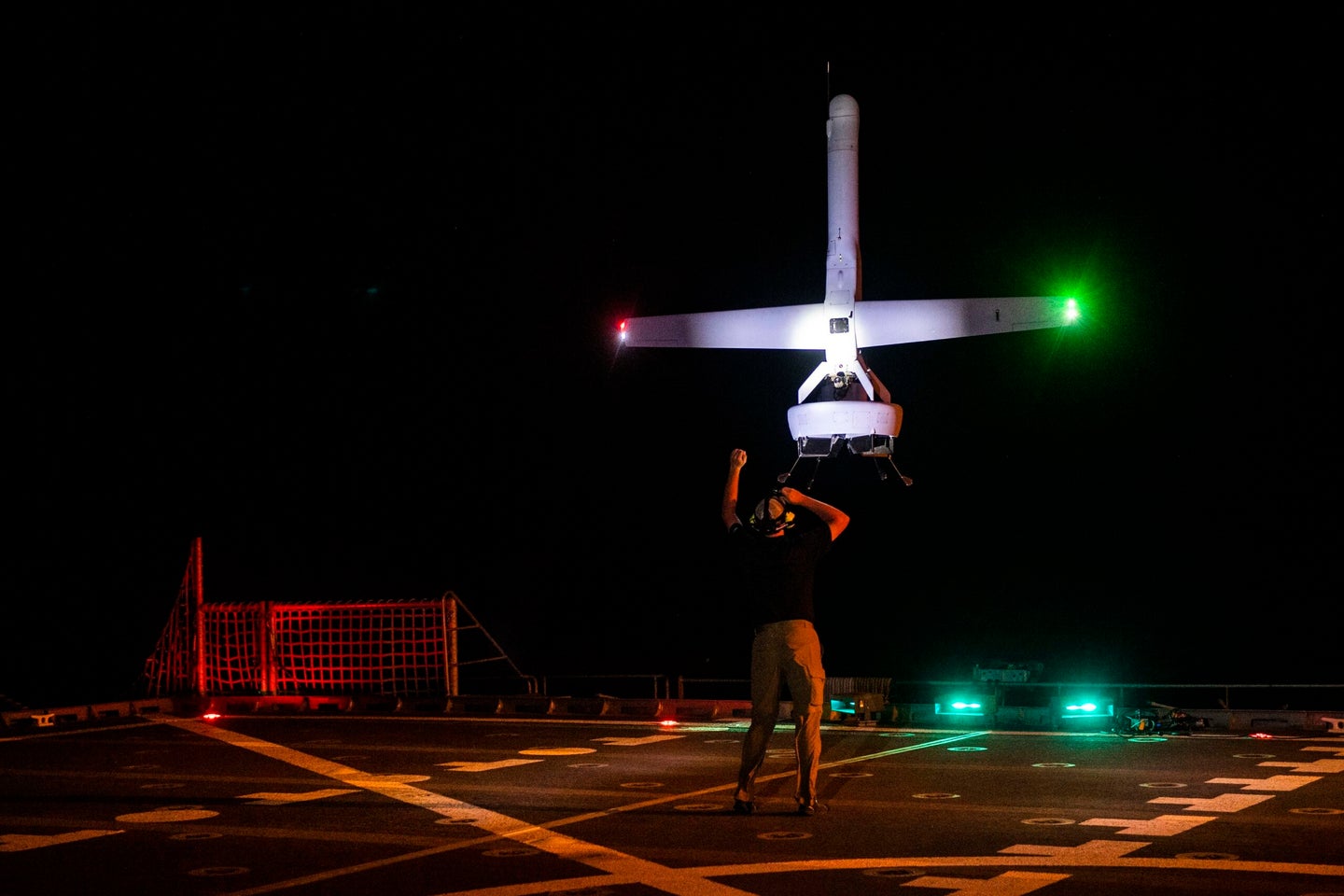 A scout drone is a system for collecting information—an uncrewed flying machine with freedom of movement and the ability to get lost or even shot down. As the United States Navy plans for greater integration of drones in its operations, the way drones capture, store, and transfer data are all new avenues for risk. At two October 26 events, the Navy and the defense industry addressed the unique problems of drone data management in the fleet. In brief, the issue at hand is how much data drones can collect, and how to convert that collected data into useful information, all while transfering that info to human commanders in a timely manner.

“What [are] the most important 1s and 0s it needs to travel on very resource-constrained devices that move things from satellite, from ship to ship and all of the above? The Navy is really struggling with this, but there are organizations that have [been] stood up to look at all these problems,” said Chris Cleary, principal cyber advisor to the Navy, according to reporting by Inside Defense. Cleary’s remarks came at an event held by the Federal News Network

While the specifics vary from vehicle to vehicle, a typical flying drone with cameras can, at a minimum, collect video, video in infrared, location data of the drone’s position, other flight information for the drone, as well as possibly the distance to an object filmed. With onboard data processing, the drone could do object analysis, and send back the raw data, the analyzed data, or both.

For nearly two decades, when the US’s primary use case for long-endurance drones was aerial surveillance and attack above Iraq and Afghanistan, collecting and analyzing the data from Predator, Reaper, and other drones became a labor-intensive task. This sometimes meant dozens of analysts watching either in-country or on video recorded and transferred to secure facilities stateside.

The Navy, which operates in fleets and squadrons at sea, can be more removed from terrestrial internet links. Satellite data links are one possibility, though they are vulnerable to loss if a shooting war spills into orbital destruction. For sailors at sea, direct connection between drones and ships is likely the way to go, though there are other hurdles for maritime drone use.

On-board processing, part of what is in the commercial world known as edge commuting, is one way to minimize the data load that needs to be transferred out. That can come with its own risks, as people receiving and acting on the data for, say, target identification, would need to trust that the onboard computer processed it correctly.

Another risk for drone use at sea is that if the drone stores data in its onboard computers, there’s a risk the data could be found when the drone is shot down and then extracted by a hostile enemy. The battlefield capture of intact sensitive Russian military equipment by Ukraine wasn’t just a battlefield victory, it also likely makes the use of that equipment by Russia against US-supplied foes less effective, as the equipment can be reverse-engineered and countermeasures can be designed with explicitly known.

Even without the risk of enemy capture, a downed drone still represents lost data. While drones will sometimes be in communication with human operators on ships, the vast expanse of ocean around the fleets that ships want to surveil could have the uncrewed vehicles flying beyond distances amenable to easy data transfer.

“When I lose the attritable thing if I don’t have links, how do I get that information off that little buddy? Otherwise, the mission was for naught and I have to go back and do it again,” Steven Fino said October 27 at the Association of Old Crows symposium in Washington, according to Inside Defense. (The Association of Old Crows is a group of former electronic warfare professionals.)

No technology can remove uncertainty from war. What new tools can offer, in the best cases, is a way for additional information to be added into the decision process. Converting data to information to action is difficult work. When it comes to designing, building, and employing flying machines, how that data is ultimately used can inform the process, and ensure drones are enhancing understanding of the world, rather than overwhelming it.