What to know about the Krasukha-4 signal jammer and the technology of electronic warfare. 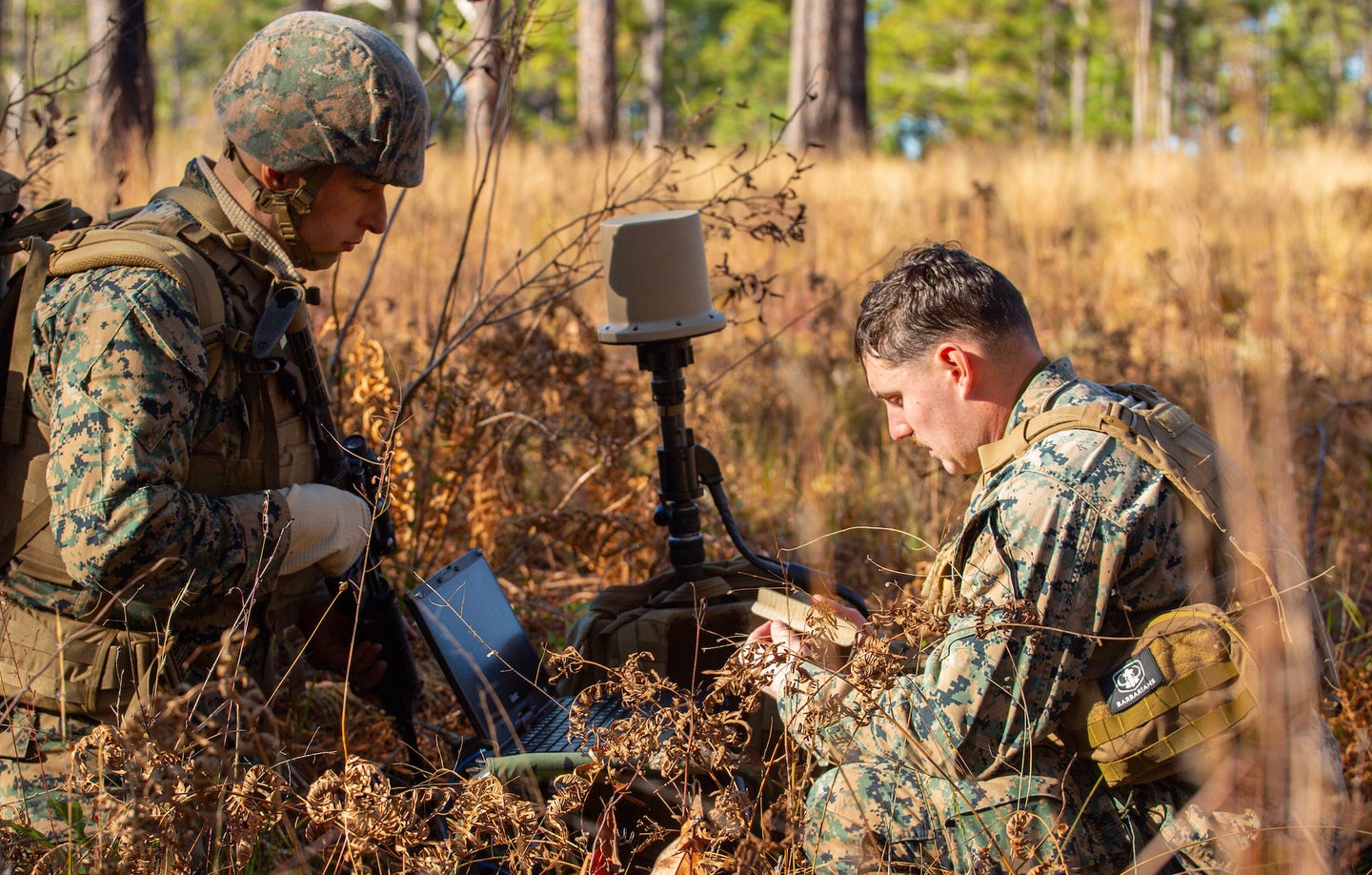 This image from a US training exercise in North Carolina in November of 2021 shows two Marines with a Communication Emitter Sensing and Attack System II ManPack. U.S. Marine Corps / Cpl. Joshua Davis
SHARE

This story was published in partnership with The Center for Public Integrity. This is the fifth in a 10-part series on nuclear risk, military technology, and the future of warfare in light of Russia’s invasion of Ukraine.

On the northern edge of the town of Makariv, roughly 30 miles from the center of Kyiv, Ukrainian forces in March reportedly captured a Krasukha-4 electronic warfare system brought by the invading Russian army. While it looks like a shipping container with irregular panels, it is actually a sophisticated signal jammer, designed to incapacitate the early warning sensors on airplanes. Photos of the captured system date to mid-March, though they appear to have not circulated online until March 22. The [London] Telegraph reported on March 23 that “the equipment will likely be transported by road to the US Air Force base in Ramstein, Germany, before it is flown to the U.S. for closer examination.”

With the Krasukha in American hands, any attempt by Russia to rebuild its electronic warfare program will have to start from the assumption that secret innovations in the captured system are now known.

The system is as big a prize as any from a modern battlefield. Electronic warfare is integral to how modern militaries fight, and the specific nature of detecting, jamming, and otherwise thwarting signals can confer a huge advantage to the military deploying it. Ever since Russia first debuted electronic warfare capabilities against Ukraine in 2014, the U.S. military has treated the threat as real, powerful, and worthy of study and imitation.

For those on the receiving end, electronic warfare can mean system failure for necessary equipment. Shortly after Russian electronic warfare equipment arrived in Crimea in 2014, “Ukrainian troops began to find that their radios and phones were unusable for hours at a time,” Foreign Policy reported.

In 2014, Russian media claimed that several aircraft flying over the Black Sea had successfully disabled the anti-air systems and radars of an American destroyer, using a new kind of jammer. The Pentagon accounts focused only on the closeness of the aircraft to the ship. A later report called the Russian version of events “patently false,” while noting that “Russia does indeed possess a growing EW capability, and the political and military leadership understand the importance of technical advances in this type of warfare. Their growing ability to blind or disrupt digital communications might help level the playing field when fighting against a superior conventional foe.”

A jammer can also interfere with weapons that rely on electronics, such as causing an electronic fuse in an artillery shell to detonate prematurely. Jammers can affect the guidance system of some missiles as well, disabling or at least interfering with them in flight. Sophisticated jammers include sensors to scan the area for signals, match against known patterns, and then calibrate a response, by sending out other signals on the same frequency.

As Ukraine fought its long war against Russian-backed separatists in Donetsk in 2015, the U.S. sent over surplus military equipment from wars in Iraq and Afghanistan. Hand-tossed Raven drones, which proved useful as scouts when fighting bands of insurgents, became jammed by Russian systems.

Natan Chazin, an advisor to Ukraine’s military, told Reuters in December 2016 that the Raven drones provided by the U.S. “were largely in storage and called them a vulnerability, allowing the enemy to see Ukrainian military positions and, when it wanted to, easily take them down. They had short battery life and were unable to reliably fulfill the key mission of gaining intelligence on artillery positions.”

The Raven drones were already outdated when they arrived in Ukraine, with the U.S. fielding models with more secure communication links at the time. A drone is a useful scout until its signal can be seen, captured and watched by an enemy. At that point, the drone is just a direct insight into where the drone’s operator is, and what kind of targets the drone is looking for.

The Krasukha-2, another variant of the same system as the one captured in Makariv, is designed to jam a range of signals, including those of airborne early warning systems, or AWACS, planes operated by NATO that specifically look for vehicles on the ground and in the sky over a wide area. In July 2018, observers spotted Russian Krasukha-2s deployed in Donetsk. In Syria, Russia boasted that its Krasukha-4 jammers could stop the signals for planes and drones at a range of up to 185 miles from the device.

Before the capture earlier this month, the U.S. had primarily understood the Krasukha systems by observing interference, and recording what signals it could block. The U.S. encountered the jammers as U.S. drones flew with Ukraine’s military, and as U.S.-operated drones and planes shared Syrian skies with Russian forces.

By jamming GPS signals, electronic warfare vehicles “can be used to create an interference ‘bubble’ to help prevent observation by threat systems. For larger systems that fly well above the range of small-arms fire, this would be a potentially effective counter,” the military journal Armor reported in its fall 2020 edition.

Aircraft in general and drones specifically are deadly to ground forces, capable of uncovering positions and directing artillery fire. Using jammers to create an area where drones do not work offers some protection against those attacks. The captured Krasukha-4 was part of a column of vehicles on the western side of Kyiv. Part of an initial attempt to surround Ukraine’s capital, the Krasukha would have prevented for some time Ukranian drones from directing long-range artillery fire on the column

With the captured Krasukha in hand, military engineers can begin to understand the system. The story of Russian electronic warfare, so feared at the start of the invasion, is being rewritten, with new revelations from the battlefield.