Engineers created a robotic hand with a gecko-like grip

Watch this robotic hand grab hold of an egg, fruits, a large plastic container, and a jug of orange juice. 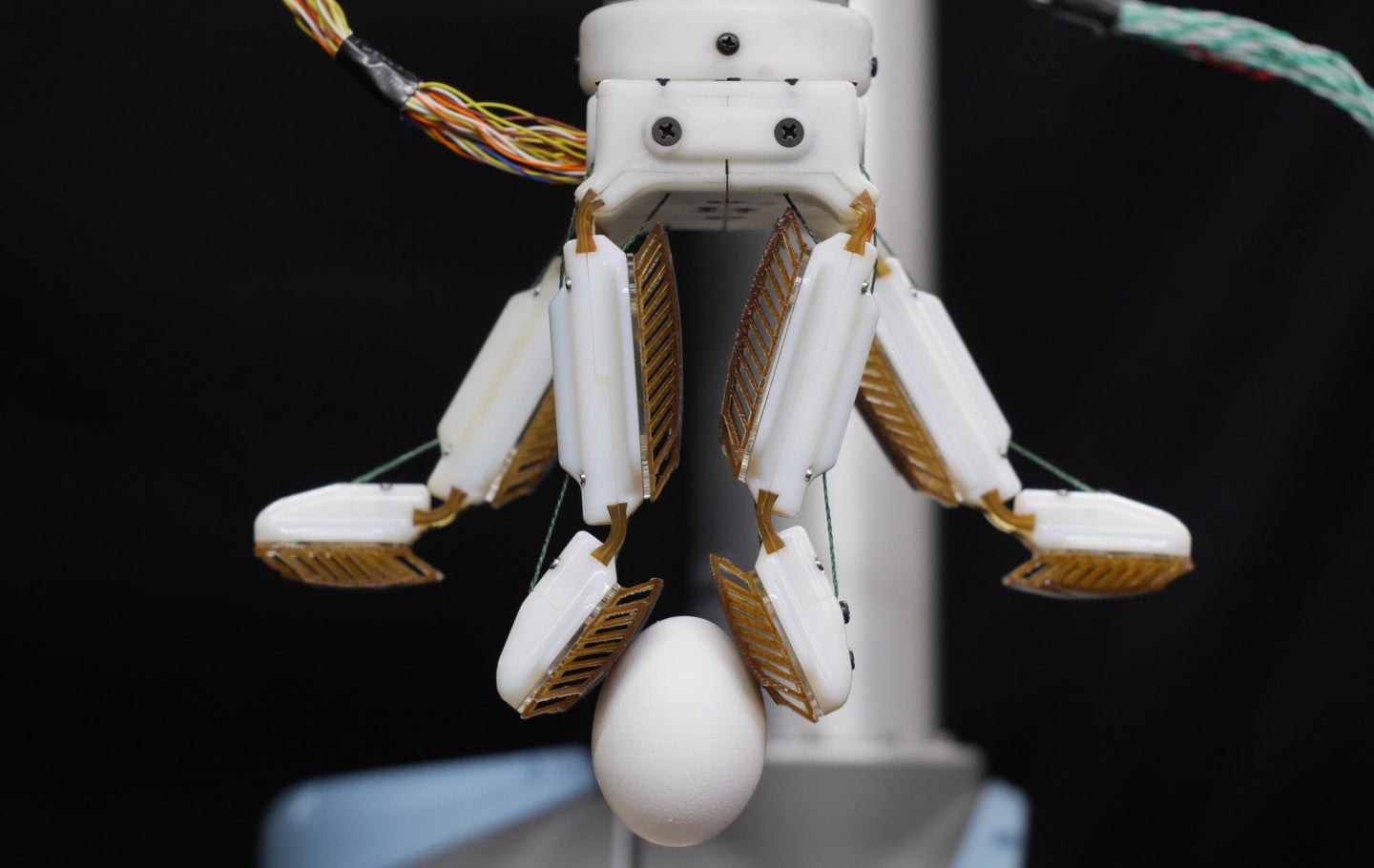 Human hands are excellent at manipulating things in the world, but the same isn’t necessarily true of a metallic robotic hand, which could have a hard time picking up an object.

If it clamps down too hard on something delicate, it could destroy it. But if it doesn’t grab onto the object hard enough, it could drop it. Stanford engineers hope to solve this problem with a new robotic hand designed with finger pads that can grip like a gecko. A study detailing their prototype, farmHand, was published this week in Science Robotics.

The project was born out of Stanford engineering professor Mark Cutkosky’s Biomimetics and Dextrous Manipulation Lab, which has been focused on creating bio-inspired robots for about 30 years. Some of its best-known inventions are the sticky, gecko-like robots that climb walls and grab onto space junk. But in this instance, “sticky,” is not the same kind of sticky as a substance like duct tape, which leaves a gummy residue. When Cutkosky says “sticky,” he’s referring to a drier, rubberier kind of sticky that takes advantage of the attractions between tiny molecules courtesy of van der Waals forces.

Instead of being all metal all the way through, this robot hand has semi-squishy fingertips, and each finger pad surface is made from a film of gecko adhesive supported by a rubber bone-like structure underneath. Cutkosky imagines that with hands like these, one day the device could perform more intricate tasks, like picking and handling heirloom tomatoes.

In the animal world, when you microscopically zoom into actual gecko fingers, you’ll see little wedge-like stalks that taper into tiny, spatula-like tips.

The gecko adhesive that his lab made, which looks like a strip of plastic, is a simplified imitation of what real life gecko fingers can do. Unlike tape, the artificial gecko adhesive only sticks onto a surface if you pull in a certain way—otherwise it will fall off. That’s because when the adhesive is lying on a surface, only the very tips of the wedges are touching it, and there’s hardly any contact area. But when the strip is pulled sideways, those wedges all lie down, increasing the contact area. “When you pull them the right way, it goes from having hardly any contact area to having almost continuous contact area,” says Cutkosky. “That large area of contact is what allows van der Waal’s forces to produce adhesion.”

“It works well for climbing,” Cutkosky adds. “We had been thinking for years how we might be able to use it for more down-to-Earth applications like grasping with a robot hand.”

[Related: This magnetic robot arm was inspired by octopus tentacles]

To accomplish this, the team had to think about how to design the structure and the control of that hand such that the gecko adhesive would always work the way it needs to, and not lose its grip. And to correctly grasp an object, the team had to ensure that all the adhesives on the individual fingers are experiencing, and maintaining, the same type of force, or else the object it’s trying to grip might slip off.

One of the big features that makes the farmHand effective at grabbing and holding onto a range of different items is the centimeter-thick pad that sits between the adhesive patch and the robot phalange, notes Wilson Ruotolo, a PhD student from Cutkosky’s lab and the first author on the paper. This pad has a buckling rib design with diagonal beams running across the two contact surfaces.

When force is applied to the adhesives, those beams will all start to buckle together. This design allows for a distribution of the force across all the fingers, so that on average, the pressure each individual finger exerts on the object it is grasping is the same.

The robot’s fingers also have bend sensors that can roughly gauge where the fingers are in space. They help position the hand. The robot hand uses feedback from the force that comes from the motors, through the tendons, and to the fingers to approximate how hard or soft an object generally is, and the right zone of force to use on it.

Ruotolo hopes to integrate more sensors into the next generation of the robot hand, perhaps sensors that can measure touch.

“Our lab also makes tactile sensors so it would be really cool to integrate those behind the pads so not only can you detect how much force you’re squeezing with, but also how much contact area you have,” says Ruotolo. That would allow the robot to dynamically adapt its grasp based on contact conditions it detects in an arbitrary object.

The adhesives are essential to having a robot hand that can grab firmly but gently. “You can do something where you exert pretty high pull forces without a lot of compressive force,” Ruotolo says. “And if you imagine picking a fruit off a vine, what you really want to be able to do is twist and pull without squeezing at all.”