Gecko-Like Drone Can Land On Walls And Ceilings [Updated]

This quadrotor uses a nature-inspired, dry adhesive to cling to surfaces for extra-covert spying. 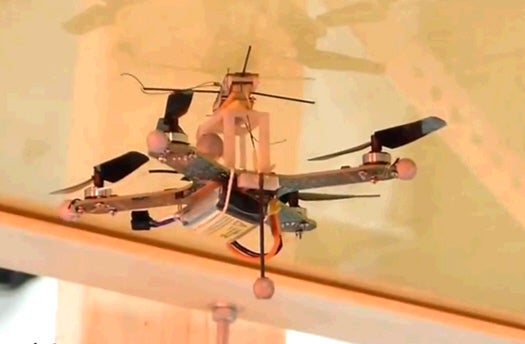 This drone could become the proverbial fly on the wall. Thanks to a joint research project between the University of Maryland’s Autonomous Vehicle Laboratory and Stanford’s Biomimetics and Dexterous Manipulation Lab, there is now a quadrotor that can cling to walls and land on ceilings.

Making a drone that sticks to ceilings like a fly is an example of biomimicry, in which researchers try to imitate natural abilities in artificial machines. We’ve seen biomimicry in quadrotors before, when the University of Pennsylvania made an eagle-inspired claw for a drone. Standford’s Biomimetics lab has already made a gecko-like robot that climbs glass surfaces, and this quadrotor borrows the same adhesive.

Andrew Kehlenbeck, a research assistant at the University of Maryland, says the gecko-inspired, dry adhesive “can detach instantly on-command and will eventually allow vehicles to perch and take-off at will on a wide variety of surfaces.”

Why make a drone that can cling to walls and land on ceilings? Sometimes, there is no other surface available, especially in a city after a disaster. Also, given the finite battery life of a vehicle, the ability to transmit information from a fixed location would mean more energy left over for flying and spying.

An earlier version of this post neglected to mention Morgan Pope as the student who designed the perching mechanism at Stanford, and that this project was made possible by the Army’s Micro-Autonomous Systems Technology program.