Major changes are coming in Android 12. Here’s how to try them early.

When Android 12 hits later this year, it will offer a substantial redesign and several privacy upgrades. 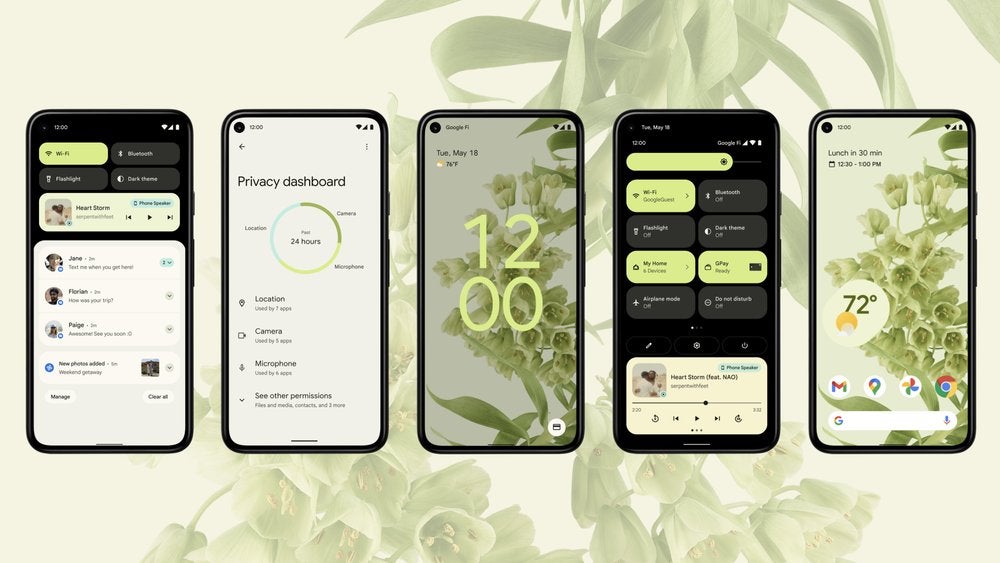 The Android 12 OS will look more stylish than its predecessor. Google
SHARE

This week, Google held its all-virtual I/O developers’ conference. It’s one of the company’s biggest events of the year and it typically offers a look at some interesting new products in the hopper. This year, Google offered up a look at its upcoming Android 12 mobile operating system. Final release is still months away—or more, depending on when various phone manufacturers decide to make the leap to the latest version. But, here’s an early glimpse at some of the new features coming down the line. If you’re particularly compelled by the new additions, you can even install the first Android 12 public beta. Just make sure you and your device are really ready for it.

Google hasn’t totally blown up Android on a fundamental level. It has added some notable new features, especially when it comes to design and security. Here’s a top-level overview of some of the new stuff you can expect when Android 12 hits this fall.

Just a quick glance at the huge new clock on the Android 12 lockscreen suggests things have changed from a design standpoint. Google has implemented a new overarching design approach it calls “Material U.”

Generally speaking, many of the familiar buttons, controls, and notifications have gotten bigger and bubblier. The volume slider is a good example—it looks massive compared to Android 11’s skinny ball-on-a-stick design. (Apparently the slider may shrink before the final Android 12 release.)The same goes for the quick settings, which now occupy huge buttons rather than smaller tiles.

When it comes to colors, Android 12 tries to take cues from the user’s decisions. When you set a new wallpaper image, the OS will analyze the colors within it and suggest an overall theme with hues that complement the image. You can override its suggestions, of course, but you can see the system striving to give users a sense of visual continuity.

If you have an iPhone, you know that holding the power button will bring up Siri. In Android 11, however, that same action brought up a specific menu with debatable utility. In Android 12, however (at least on Pixel phones), holding down the power button will simply summon Google Assistant so you can interact via voice. As a person who switches back and forth between Android and iPhone semi-regularly, I’m glad to see this. Whether it’s a plus for you, however, will depend on your preference.

Since manufacturers have started pushing up refresh rates on phone screens, the battle for superior smoothness has been heating up. While a faster refreshing screen can make navigating through an operating system smoother, it only works if the device has the computing power to handle the operations. In Android 12, Google says it has drastically reduced the amount of resources taken up by basic system processes, which should cut down on resource bottlenecks and make for more fluid on-screen motion. Even if you don’t notice  jitter and lag that much on a daily basis, you will probably notice when it’s gone if Google’s plan works out. Things should feel snappier overall.

Look in the top right corner of an Android 12 screen and you’ll find indicators that show up when an app is accessing your location, microphone, or camera. It’s similar to the iPhone’s tiny dot notification that expresses the same idea.

While the indicator is handy for monitoring privacy in real-time, a new security dashboard allows users to go back and review which apps have accessed the camera, mic, and location.

A new menu option can turn the camera and microphone off completely, so if an app tries to access it, it will get a black image and silence.

In terms of location tracking, Android 12 offers a new Approximate Location, which will give apps an idea of where you are without specifically pinpointing you down to a GPS coordinate. That way, you can get general neighborhood information without giving up granular info about your location.

If you’re hoping for something like Apple’s new “do not track” feature, which requires apps to get users’ explicit permission before collecting data for advertising, you’re out of luck. After all, Google is a massive player in the online advertising space and that kind of change could have a profound effect on that company. I wouldn’t be surprised to see the company make at least some efforts to keep up with Apple in that regard some time this year.

If you’re already excited about Android 12, the first public beta is already available. It will only work on specific devices from Google (obviously), OnePlus, Asus, Oppo, and a few others. If you’re a Samsung user, you’re out of luck. None of that should be surprising at this point, though.

This is a very early beta, which means you definitely shouldn’t install it on a device you regularly rely on. It will be buggy and missing features that will make your life inconvenient. Google Pixel devices will also handle the beta better than others. For instance, OnePlus devices will lose access to face and fingerprint unlock in the first beta, which is very inconvenient. All of that will be figured out before the public Gold release later this year, but for now, this is only for adventurous Android users. Consider yourself warned.

When does Android 12 come out?

If you have a current Google Pixel phone, you’ll be able to get Android 12 in the fall. That’s a very typical release schedule for new Android versions. If you’re using equipment from other manufacturers, then it will be arriving sometime after that. While we’re still a far cry from Android devices all getting software updates simultaneously, Google claims that the process is speeding up. According to the company, manufacturers have moved their devices to the latest release 30 percent faster than in previous years.. Slow and steady gets you the new Android features.