Let’s watch Google announce the Pixel 2, the Home Mini, and other stuff

Spend your lunch break watching the Google livestream as the new products debut. 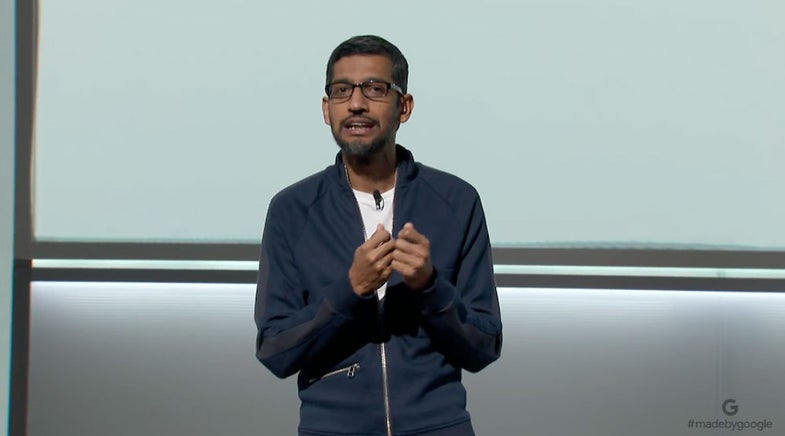 We’re watching the Google announcement Livestream right now. Continue on for an updating stream of the new products and programs as they happen.

Early talks focus heavily on the work Google is doing in AI. It wants to make software more responsive and able to understand context like shifting the way it shows you a calendar. Reducing the number of features users have to think about sounds like a plus to me.

Getting stats out of the way early from Google’s Rick Osterloh:

Google shrunk its Home device. It will cost $50 when it arrives on October 19th (pre-orders are happening now). The design of the new, smaller Google Home device is serious business. Google created its own thread to let light and sound through it. It took 157 tries to get the exact grey color just right.

It can connect to Chromecasts and do pretty much everything else the big Home can, which makes it seem like a very attractive option compared to the new Echo offerings from Amazon.

The CTO of Nest, Yoky Mastsuoka, has a pet pig and she uses Nest to watch it eat her son’s forgotten lunch. Technology is awesome. This part of the presentation was mostly to show off the already-announced devices from Nest.

There’s clearly an initiative to get more Google Home devices into your house. You can now use the Broadcast feature to send a message to every Home in the house. Google has also adapted its voice recognition tech to be more accessible for kids who are still developing their speaking skills. You can say, “Hey Google, let’s learn” to kick off some learning games. It’s a partnership with Disney, so if you’re a parent hoping to escape your kids’ favorite characters, instead they will live inside a device in your house that you can’t get away from.

If the Google Home isn’t loud enough, the $399 Google Home Max cranks up the volume by 20 times. The Home Max has two 4.5-inch speakers inside and new Google tech called Smart Sound. AI automatically tunes the speaker to match the shape and makeup of your room. It also automatically adjusts the volume and sound quality based on the environment. Hopefully that means it will only play Slayer at full volume.

The Home Max supports Spotify, YouTube, and an assortment of other services, as well as Bluetooth and auxiliary sound.

Google is going deep on a high-end convertible tablet/laptop. It has a glass inlay on the lid to match the Pixel phone. It has a 12.3-inch touchscreen with a 235 ppi pixel density but doesn’t look like it’s an OLED display. You can get Core i5 and i7 processors, up to 16 GB RAM and 512 GB. It charges via USB C and gets up to 10 hours of usage on a charge.

Instant Tethering automatically finds your Pixel phone and jumps onto its network when no Wi-Fi is available. Lots of applause for that announcement.

Pixelbook starts at $999, plus the $100 add-on for the Pen (more on that in a minute). That pricing got a tepid reaction from the crowd. Interesting to see what you get for the same price as the iPhone X.

Since the Pixelbook is a hybrid device, it lends itself to a stylus and the new Pen is Google’s answer to the Apple Pencil or the Surface Pen from Microsoft. It has 10 milliseconds of latency and 2,000 levels of pressure sensitivity and was designed along with Wacom, a company that has been the standard in that space for years.

The five-inch Pixel 2 has an OLED display and comes in three colors: blue, black, and white. The six-inch Pixel has a curved P OLED display. It supports 18:9 QHD resolution with a pixel density of 538 pixels per inch. Translation: It has a lot of pixels.

The size is really the only difference here as Google points out that it doesn’t save better features for a bigger device (sick Apple burn).

The Pixel 2 has an always-on display like the Samsung Galaxy Note 8. It can display info like time, but it also identifies songs as they’re playing without communicating with Google servers. It has on-device tech that makes it a music expert and then will conveniently guide you to hear it on YouTube or buy it from Google.

You can now summon the Google Assistant by squeezing the Pixel 2 phone. I wonder if it works with hugging. I’m going to hug it so much.

The computer vision platform coming down the road can see and recognize objects in the real world. Samsung’s Bixby promises a similar thing but has gotten off to a rough start. Google claims an accuracy rate of 95-percent. It’s tied into search, including local search across your own data, so you can go through your own photos and media.

Augmented reality is, of course, in full effect. You get stickers, games, Legos, and pretty much everything else you expect. You can even make your own Demogorgon.

The Pixel’s camera was a big draw and Google isn’t ignoring it. The camera has gotten more machine learning smarts, including a portrait mode to blue the background of an image, even without a pair of cameras. Portrait mode also works on the front camera. Google has tweaked the HDR algorithm to push effective dynamic range. It promises a DXO score of 98, which to camera nerds means that the quality is good under controlled conditions.

You still get free storage of all your pixels and videos from the Pixel 2 phones. Google says Pixel users take twice as many photos as the average iPhone user.

You can now get some free IMAX movies to watch on the Pixel or Pixel 2 when it’s strapped to your face in Google’s $99 VR headset.

There’s no headphone jack on either Pixel 2 smartphone, but Google does have its own pair of wireless earbuds ready to ship with it. They do more than play music, though, including a pretty impressive real-time translation tech that can translate 40 languages at the speed of a normal conversation.

The Pixel Buds get five-hours of listening on a single charge and come in a charging case that can refuel more than ones. They cost $159 and pre-orders are starting now.

Remember life-logging cameras? Google made one! Clips is a camera that clips onto pretty much anything and records images and videos without the need for a photographer. It has machine learning built-in so it can recognize people it sees and understand clear shots to try and create things worth looking back at.

It captures “clips” including motion photos and videos. It costs $249 which sounds like a lot.