Robo cars will force us off asphalt—and into the great out there. 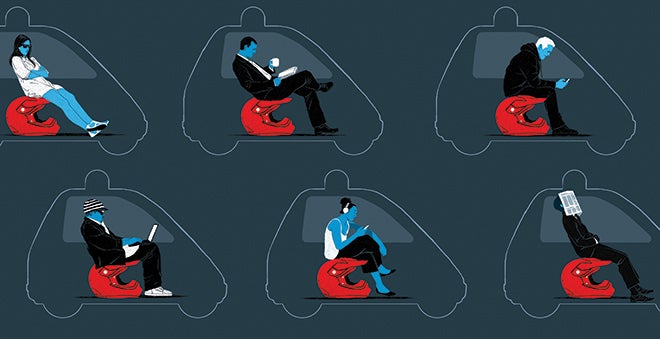 “We’re about to have a kid, and I don’t think she’s ever going to get her driver’s license,” says Scott Kubly, director of the Seattle Department of Transportation. “Based on where we are technologically, there just won’t be a need.” In August, right before Kubly went on paternity leave, his agency released a 48-page report titled “The New Mobility Playbook” (complete with 147 pages of appendices). In it, SDOT presents a comprehensive plan for dealing with a future in which cars autonomously pilot passengers to work right alongside the city’s buses, trains, and taxis.

Seattle isn’t alone in thinking this way. The Boston Consulting Group, which helps Fortune 500 companies—including an undisclosed number of automotive manufacturers—understand business challenges coming down the road, sees a semi- autonomous future unfolding, like, now. “It could start happening in two years,” says BCG partner Justin Rose. And by 2030, according to the firm’s research, half of the residents of the country’s 45 largest cities will have access to self-driving and car-sharing technologies. Great—so then we’re all gonna turn in our keys and never get behind the wheel again, right? “I think there will be a strong group of people for a long time who desire to have cars they can drive,” Rose says.

Indeed, it’s hard to believe that those so devoted to the church of the road will ever release their grip on the steering wheel. Maybe they won’t. But maybe they will stop driving on streets and highways.

Four out of the 10 most innovative ­automotive technologies of the year are ­engineered for drivers wearing helmets rather than business casual. The 2018 Dodge Challenger SRT Demon—which has so much power that it can do wheelies—comes with a peculiar $1 add-on: a crate of performance parts that lets you take the otherwise street-legal monster to the drag strip. Right off the factory floor, the Chevy Colorado ZR2 can tackle some of the roughest off-road environments in the world, including the car-killing ascents of Moab, Utah. Two out of the Ford GT‘s five driving modes are meant for use on the track, catering to the $450,000 machine’s club-racing clientele. Our Grand Award Winner, the Alta Motors Redshift MX, isn’t even allowed on public roads. It’s meant for bombing around motocross tracks, big backyards, and single-track woods trails.

Whether industry heavies will admit they envision a future when humans drive vehicles more often for leisure than for commuting, innovation is an excellent proxy for R&D dollars. Automotive companies clearly see their customers looking for driving ­experiences in places a Tesla won’t go.

Mark Dickens, executive director of ­Performance Vehicles at General Motors—he greenlights special vehicles like the Chevy ZR2—sees the trend. “This overland growth is real,” he says, referring to the increase in outdoorsy motorheads who like to take their vehicles on multiday no-road adventures. “That’s the wave that’s coming.”

The off-road boom is loud in the two-wheeled world as well. According to the ­Motorcycle Industry Council, sales of off-highway motorcycles rose 29 percent between 2012 and 2016. By comparison, road-oriented bike sales eked up by just 6 percent during that time. That’s a nearly 400-percent drubbing, and there’s a lot of insider speculation that millennials just don’t love the open highway like their parents did. The open range, however, seems to make their yearning hearts hum.

So yeah, the autonomous revolution is coming. Someday we’ll all read our way to the office in the comfort of our own robo cars. And then, when we Flintstone out of the office at 5 p.m. on a Friday, maybe we’ll all meet at the off-road park—comparing times and reminiscing about the dumb ol’ days, when we were crazy enough to drive on the street alongside other imperfect humans.