And is it already too late?! 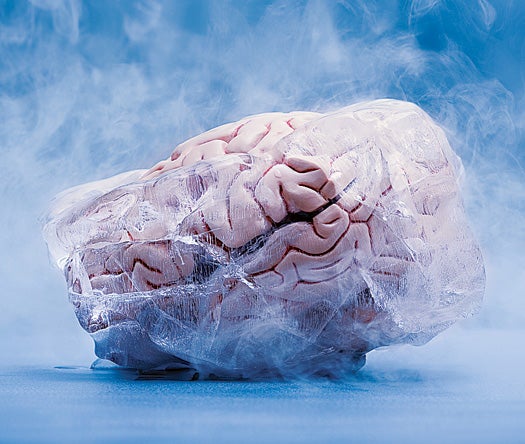 We’ve all sucked down a milkshake so quickly that it causes a sudden headache—the dreaded brain freeze. But . . . milkshake. Tasty. Must. Drink. Could chugging the rest of that shake cause lasting brain damage?

First, let’s get one thing straight. “This condition is referred to as an ‘ice-cream headache,’ ” says Stacey Gray, a sinus surgeon at the Massachusetts Eye and Ear Infirmary in Boston. “It’s a very technical term.” Although there’s no published paper saying as much, a milkshake slurped too quickly probably does not actually lower brain temperature. Besides, Gray says, the temporary pain can’t do any harm because it has nothing to do with the brain.

There are two schools of thought on what causes the ice-cream headache. The drink may chill the air in your sinuses and cause the blood vessels in the nasal cavity near your forehead to constrict, creating pain similar to a migraine. Or perhaps it touches off a branch of the trigeminal nerve in your mouth, triggering a pain response in the nerve that’s responsible for facial sensation.

The condition has not drawn research funding from the National Institutes of Health, so no one has performed the simple experiment that Gray says would settle things once and for all. “You could block the nerve with an injection of lidocaine, cool the area, and if it still happens it’s probably a circulatory-system thing,” she says. “But no one seems that interested.”

Even if a cold drink was able to temporarily chill your brain a few degrees, it wouldn’t be a big deal. Neurosurgeons including Johns Hopkins Hospital’s Rafael Tamargo often take the brain from its cozy resting range of between 98.6˚F and 100.4˚ all the way down to 64˚. “There are situations, particularly for correcting blood-vessel problems like an aneurysm, where we cool the brain in order to stop circulation to an area to perform our work safely,” he says. When the brain is chilled to 68˚, its metabolism and electrical activity drop to 15 percent; surgeons reduce it to 64˚for good measure.

“Even if the patient wasn’t anesthetized, at that temperature they would be in a noninteractive state, unable to sense stimuli or produce a response,” Tamargo says. “But once you warm the brain up, it picks right up from where it left off. It’s not harmful at all.” So whether your brain is frozen or not, if you can handle a little pain, slurp away.

This article originally appeared in the October 2010 issue of Popular Science_ magazine._