NASA, Boeing, and others are using 3-D printed parts in their aircraft. Next up? A printable private jet. 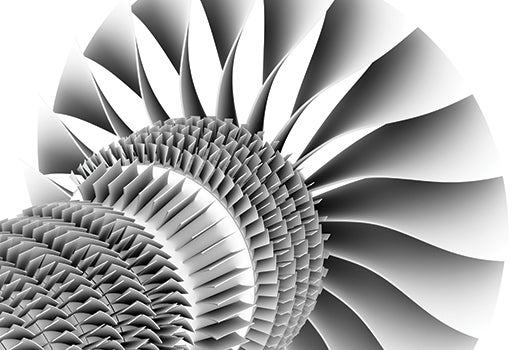 Engineers at NASA are testing functional 3-D–printed parts for a rocket engine. But printing a turbofan, as rendered below, is beyond reach—for now. Todd Detwiler
SHARE

For the past decade, aerospace manufacturers have used additive printing to prototype select parts. The process is fast and affordable. “We can make the first batch of parts faster than any toolmaker can make the molds and jigs,” says Brett Lyons, a materials and process engineer at Boeing Research & Technology. But companies used only a few materials and printing techniques, such as Selective Laser Sintering (SLS), a process that uses lasers to bond thin layers of metals or thermoplastics.

That’s changing. Companies have an increasing number of printing techniques to choose from, such as electron-beam melting, which, like SLS, makes production-grade aerospace parts. They can also print with many materials, including titanium, ceramic, and resin. Arcam, a 3-D–printer manufacturer in Sweden, is working with select labs to develop new materials and substantially expand its portfolio. As a result, companies are now using 3-D printing to create working parts, not just prototypes.

For now, those parts aren’t critical aircraft components. For example, the new Boeing 787 Dreamliner includes 30 or so printed components—a record—but most of them are air ducts or hinges. That, too, could change. In November, NASA started printing parts to test for its next heavy-lift rocket. One company, DIYRockets, went even further: It launched a contest to develop an open-source, 3-D–printable rocket engine. Last fall, students at the University of Virginia printed almost all the components of an operational UAV, including the 6.5-foot wingspan, and flew it around an airfield.

Perhaps the most audacious plan comes from Bastian Schaefer, a cabin engineer with Airbus who designed a printable private jet. There are presently no printers large enough to generate some of its parts—Schaefer estimates he needs a machine 260 feet by 260 feet—but he will begin printing the smaller parts now and hopes to complete his plane by 2050, when, he says, technology catches up.