Metamaterial Can Squirt A Magnetic Field Through A Hose 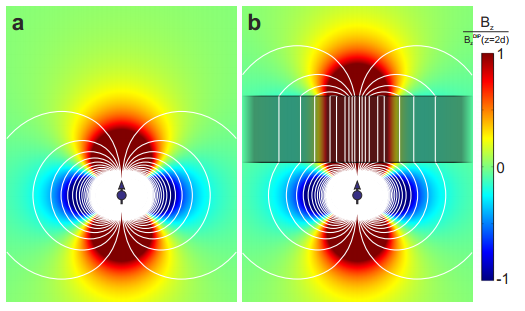 Electromagnetic waves can travel over long distances without interruption. But magnetism, the field that attracts or repels objects, only works at close range. Now a team of Spanish and German researchers proves otherwise: They have developed a “magnetic hose,” capable of transferring a magnetic field across long distances in any direction they want.

The problem is that magnetic fields decay very quickly with increasing distance from the source. That’s why papers fall off your refrigerator when you stack them too thickly. This new method would amplify those fields, allowing magnetic fields to still propagate far away from the magnetic dipole that generates them. It requires a metamaterial magnet-amplifier.

In a small prototype, they tested a 7-centimeter superconducting tube with a coil at one end generating a field of 1.3 mTesla. The magnetic field was guided through the superconducting “hose” and out the other end. Their paper is posted on the arXiv preprint server.

This could be useful in quantum information systems, the authors explain. Magnetic hoses could be used in quantum processors or quantum repeaters, extending magnetic fields well beyond their normally tiny spheres of influence.