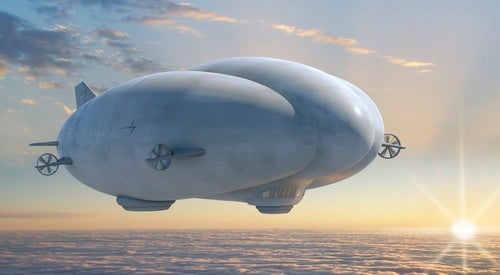 The second golden age of the airship has run head-on into a logistical snag, Danger Room reports this morning. The military is so eager to get more airships in the air in places like Afghanistan that industry cannot keep up with its demand for helium gas and helium gas containers.

We’ve reported previously that helium supplies are running short (can we go ahead and coin the term “peak helium?”), but that was at a more macro, global scale. The military’s problem is more specific: it needs to get more reconnaissance aerostats in the sky over Afghanistan, and it can’t find dealers that can fill its tall orders for helium.

Airships like Northrop Grumman’s Long Endurance Multi-Intelligence Vehicle (LEMV) need a hell of a lot of helium–roughly 800,000 cubic feet per–quantities that commercial dealers can’t seem to reliably meet. In fact, DR reports, when the Pentagon’s Defense Logistics Agency recently put out a request for helium to meet the DoD’s airship needs, no one called back. They had to break down their bulk order into smaller pieces.

That’s not to say we’re completely out of helium, but right now demand seems to be outstripping supply. Helium gas isn’t just good for party favors. Helium has the lowest boiling point of any known readily available gas, so it’s an in-demand gaseous cooling source for things like superconducting magnets in MRI scanners or particle colliders. It’s used in everything from fiber optics to quantum computers.

And, of course, in airships, which brings us back to the problem at hand. The military continues to fuel up more blimps–they can carry way more reconnaissance gear than, say, Predator and Reaper drones, and they can stay aloft for days rather than hours. But there’s really no great way to get at helium in large quantities cheaply and easily. Which means those colorful party balloons may become a lot more expensive at some point in the next decade.