The first priority in a bomb-related emergency is, of course, to safely dismantle the bomb. If it’s a pipe bomb–the... 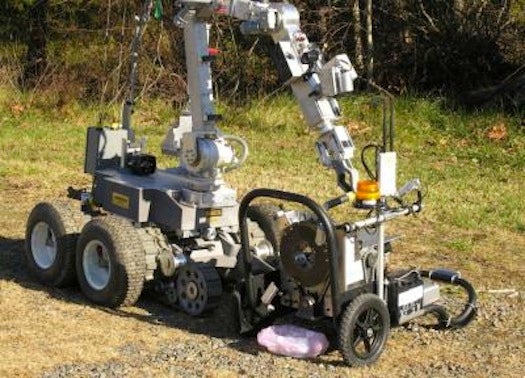 The first priority in a bomb-related emergency is, of course, to safely dismantle the bomb. If it’s a pipe bomb–the basement-built explosive device–a robot could be sent in to do the job. But enlisting one could hurt officials’ secondary objective: obtaining evidence to determine who built the bomb. SAPBER, a new robot, can safely disarm it and turn over the forensics needed to track down its maker.

Short for semi autonomous pipe bomb end-cap remover, the device comes from The Department of Homeland Security Science and Technology Directorate. A bomb-disposal robot first retrieves the pipe bomb, then SAPBER, piloted remotely, disassembles it using tools like cutting wheels and a twisting wrist so the inside material–whatever that may be; there are no hard and fast laws of pipe bomb-building–can be emptied out by authorities and examined. Other techniques could damage the evidence while disabling it. The bomb-disposal ‘bot places the bomb on SAPBER’s tray, and after it takes off a piece, collects it internally. While working, it also uses four video cameras to record the process for forensic use.

SAPBER’s meant to easily fit into local departments’ bomb preparation routine; it’s small enough to fit on a bomb-squad truck, only weighs 140 pounds, and is made from mass-manufactured parts that can be re-ordered if one breaks. It doesn’t look like much for its price tag of $12,000, but its already been run through live-test gauntlets, presumably being prepped for wider adoption.