This boxy guy is called Kuratas, otherwise known as Vaudeville, and he stands 12 feet 5 inches tall. He weighs about... 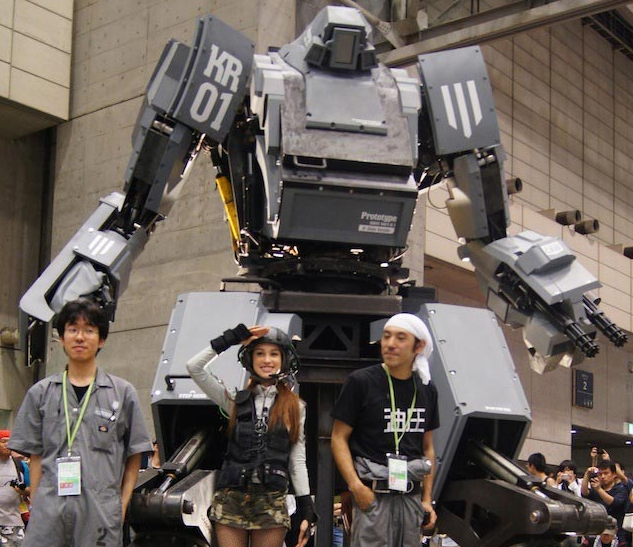 This boxy guy is called Kuratas, otherwise known as Vaudeville, and he stands 12 feet 5 inches tall. He weighs about 4.5 tons and is diesel-powered. Do not smile at him. He will shoot that grin right off your face.

Kuratas is a real-life mech from (where else?) Japan, and it’s an art project designed by Suidobashi Heavy Industry. Iron worker/artist Kogoro Kurata, at right in the photo above, built his namesake robot and debuted it at something called Wonder Fest 2012, which took place over the weekend.

It has a ride-in cockpit, a master-slave joystick and a touchscreen interface, and its arms can be controlled via Kinect, so it could be trained as a champion boxer. Its twin BB Gatling guns can fire up to 6,000 BBs per minute, according to Plastic Pals. And it fires when a small camera inside the robot detects when you smile. This is just for fun, however — Kurata says he would never want his creation to harm anyone. But it could be used for robot competitions, he said.

You could pretend-order one of your own, via a slick website Kurata and his colleagues at Suidobashi designed. The mecha come in various color schemes and customizable weapons. But the base model starts at $1,353,500, so better start saving.