We’ve seen schemes for remotely-controlled cyborg insects before, including at least one DIY kit for building your own robotically-enhanced cockroach,... 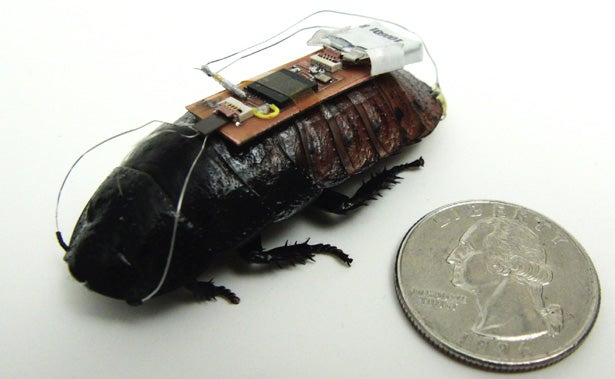 We’ve seen schemes for remotely-controlled cyborg insects before, including at least one DIY kit for building your own robotically-enhanced cockroach, but researchers at NC State are really moving this discipline forward (literally). A team there has developed an electronic interface that allows them to remotely control cockroaches along fairly precise paths, and they have the video to prove it.

The idea here is to find a way to pilot sensor laden insects into places humans wouldn’t want to go, like a chemical contamination site or a collapsed building. By piggybacking on the cockroach’s evolutionarily-tested physiology, robotics researchers can skip the difficult step of building a reliable robotic body to carry their sensor loads. But in order for this to work, of course, users have to be able to control the cockroaches.

Doing so isn’t necessarily easy, but the NC State team has found a way to do so that also taps the cockroaches natural sensory pathways to stimulate certain movements. The team wired a 0.7-gram micro-controller that is fitted to the roach’s back (the team used Madagascar hissing cockroaches) to its antennae and cerci. The cerci is an organ on the roaches abdomen that senses movement in the air and gives the roach a sense that something is approaching from behind, prompting it to move forward. The antennae sense obstacles in front of the roach and spur it to turn right or left to avoid the physical impediment.

By sending small electrical impulses to these organs, the researchers have demonstrated that they can both prompt their “biobotic” roaches to scurry forward and steer them along a curved path. Creep yourself out with the video below.