A lot has been written about the perceived benefits and non-benefits of higher-than-the-human-eye-can-perceive resolutions, things like displays that go beyond... 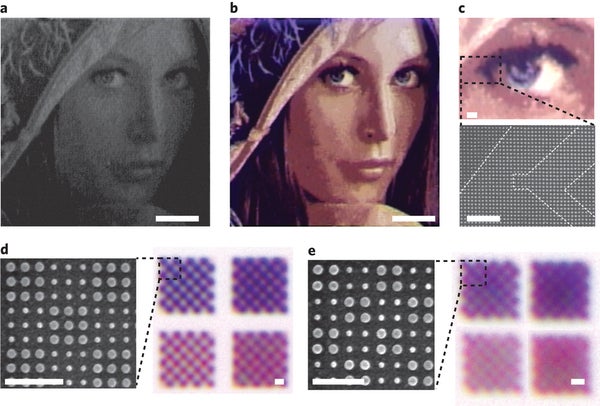 A lot has been written about the perceived benefits and non-benefits of higher-than-the-human-eye-can-perceive resolutions, things like displays that go beyond HD and retina or cameras and scanners that capture imagery in pixel counts that go so far beyond the threshold of what we can see as to be meaningless, at least visually speaking. Undaunted, researchers in Singapore claim they have achieved the highest resolution possible for color laser printing by recreating the classic Lena test image at 100,000dpi.

Why is this the upper limit of resolution? According to the researchers, if the individual pixels where any smaller light would simply bounce off them and diffract, blurring the picture rather than sharpening it. And these aren’t your average pixels either. Each is a tiny gold or silver nanodisk fixed to a tiny pillar. Color is conjured by adjusting each disks diameter and the spacing between it and its neighbors, creating an effect called plasmon resonance that is perceived by the eye as different shades.

Or so we’re told. The abstract presenting this research is full of interesting things you probably didn’t know about light, color, and nano-science. Read on.

[Nature via The Verge]